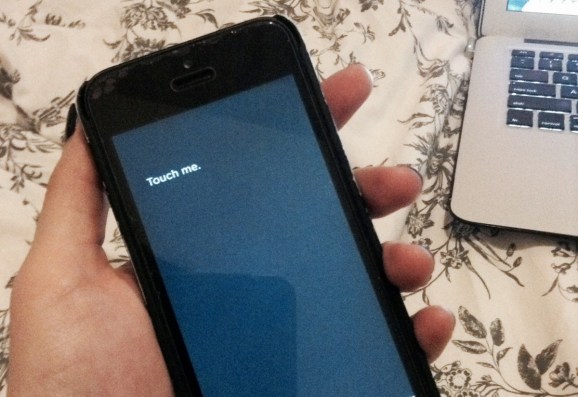 Fun fact: The folks over at Secret, the company that created the gossipy app for social anonymous posts, recently had an internal simplicity-focused hackathon.

Other fun fact: The hackathon resulted in a new app called Ping that the company quietly released today.

Today, we released Ping. A simple product that lives on your lock screen. There are no signups and no usernames  —  just content.

Ping was born out of a weekend hackathon where the goal was an exercise in simplicity. We were fascinated by the idea of an app that could tell you what you need to know, right when you need to know it. Why scavenge for content  —  it should come to you.

The app activates when your phone’s screen is locked and lets you navigate through content simply by placing your finger on the dot at the corner of the screen and pulling it to open up a new screen. It’s like peeling off a sticker, in a way.

After you’ve downloaded Ping, it asks you to subscribe to various subjects you’d like to know more about. The app will then notify — or ping — you with new content about any selected subjects, which you can then check out through the app’s dot-pulling interface. The content itself seems to be generated from RSS feeds or other automated systems. The movie recommendations, for example, come from Rotten Tomatoes.

Here’s the video Lee included in his post for a quick peek at how looks:

Ping seems to be about freeing you from actively looking for content. As Product Hunt’s Ryan Hoover writes, “Ping is another example of a lightweight, notification-driven app,” much like Yo and company.

And since Ping is so new and experimental, it’ll be interesting to see what Secret’s team does with it. In Ping’s discussion thread on Product Hunt, Secret’s David Byttow vaguely encourages people to stick with it, explaining that Ping evolves over time. “Those who decide to let Ping live on their phone will be surprised and delighted,” he said.

VentureBeat’s Tom Cheredar, however, is not convinced. “This is possibly the stupidest f%$#* thing ever, and it doesn’t do a very good job of explaining its value or why people should keep using it,” he told me after playing with the app for a few moments. “It’s as if the developers were so obsessed with the UI design that they decided Ping could coast on tech hipster hype alone.” He was later more understanding once he learned that Ping came out of a hackathon.

Black dots and circles do seem popular among the “hipster tech” folk, with counter-culture social network Ello also choosing a slightly creepy black circle (it has a smile but no eyes and that’s weird) as its logo.