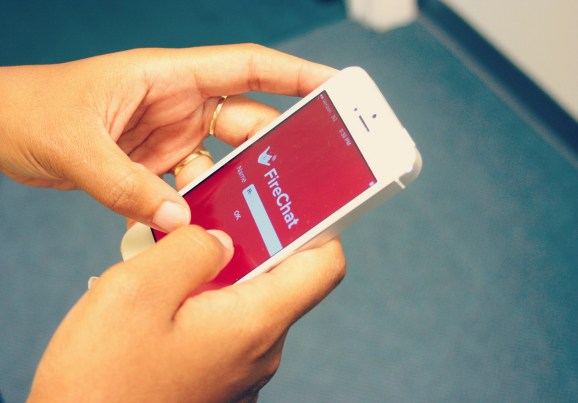 As pro-democracy protesters flood Hong Kong streets, one app in particular is getting plenty of attention: FireChat, a mobile chat app that can work even without an Internet connection.

On Sunday, FireChat saw more than 100,000 signups in Hong Kong, the app’s parent company Open Garden announced yesterday. The massive spike in usage followed China’s blocking of Instagram yesterday. Protesters had been relying on Instagram to communicate, so when it got blocked, many of them turned to the more-decentralized FireChat.

The big benefit of FireChat: Since it relies on mesh networking for its “Nearby” chat mode, you can still send messages to nearby friends even if Internet access gets shut down. It also works if you’re in an area where the wireless networks are congested.

It may get even better, as FireChat’s parent company plans to add verified usernames and encryption to FireChat soon.

In Nearby mode, FireChat connects mobile devices to one another via direct, peer-to-peer connections instead of going through cell towers. Its range is about 40 to 70 meters (131 feet to 220 feet). To reach more remote devices, it sends messages through a series of intermediate devices. The result: The more people using FireChat, the farther its mesh network can reach.

Just like Twitter during the Arab Spring protests, FireChat in Hong Kong ended up being just the right tool available at the right time.

FireChat users in Hong Kong were involved in more than 800,000 chat sessions over the past day, Open Garden chief marketing officer Christophe Daligault told VentureBeat in an interview. And, on average, they spent about three-and-a-half minutes in a conversation (about 45 seconds more than people in the U.S. and U.K.).

But, even more intriguing, the true amount of FireChat activity is completely unknown. The company can only track sessions occurring while users are online. Once they move off the grid and create a mesh network to communicate, the actual usage is anyone’s guess.

“We have no sense of how big the mesh networks have gotten, it’s like the other side of the moon, unfortunately,” Daligault he told me in an interview.

While Open Garden (which has just 13 people at this point) was surprised by its prominent role in one of Hong Kong’s largest mass protests yet, it still has plenty planned for the coming months.

The company plans to implement verified usernames within the next few weeks, allowing notable users to prove their identity (similar to how Twitter handles verified users).

The company is also working on implementing encrypted chats, which would fix FireChat’s biggest flaw at the moment. While it’s a useful tool if the government decides to kill Internet access, all of your FireChat conversations are entirely open to the public. There’s nothing stopping the authorities from eavesdropping on everything you’re posting. There’s also no way to communicate with specific users directly, though Daligault tells me private messaging is also in the works.

“Everything we do is harder than any other messaging app, because it has to work off the grid,” Daligault said.

For San Francisco-based Open Garden, a company that was originally known for its innovative mesh networking technology for sharing your internet connection, the success of FireChat was particularly surprising. It took the company a year and a half to reach 1.5 million downloads of its mesh networking software for computers — but it took FireChat only 10 days to reach that same figure.