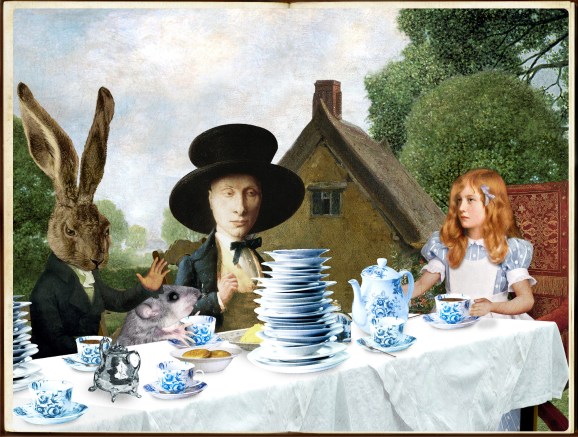 Update 10/7/2014: VentureBeat has learned that the revenue figure ($70,000 for the final week of August 2014) provided by The Alice App’s creator was not accurate, and cannot be independently verified. We apologize, and have added a note to the corresponding paragraph where revenue for The Alice App is first mentioned.

With the growing number of digital distractions vying for the attention of your kids, reading books might seem far less appealing. Interactive books can bridge the gap, and some of them are having real success.

Take the interactive book Alice. Since the last week of August, it’s been pulling in $70,000 a week from iOS customers alone and is on Apple’s list of top-grossing apps, the app’s creator Emanuel Paletz revealed exclusively to VentureBeat. [Editorial note: Please see the update at the top of this post regarding revenue figures.]

Alice is presented as a mobile app, but it’s technically a book that can be read on iPads and Android tablets. The story is based on the classic Alice’s Adventures In Wonderland by Lewis Carroll, and it features beautiful illustrations you can interact with by touching the tablet screen, as well as an engaging narrator reading each page.

“Regular e-books have limitations, and I wanted to create a new level of engagement. I wanted to combine interactive experience along with film ‘feel,'” Paletz said in an interview. “The application is an art book, a conceptual book, and an educational book all in one, so it has something for everyone.”

So why is it that people are buying this book in particular? For one, it’s more than just a quaint update on the classic story reimagined for connected devices.

“[The artwork] was done in a collage technique from Dutch and Flemish Renaissance painting,” he told me, adding that it took about four years to be completed when factoring in Alice’s programming, sound effects, and copywriting efforts. “I had a team that included an after-effects specialist, two programmers, a sound effects person, and a copywriter.”

Upon opening the book, you’re greeted with the option to delve straight into the story or check out a guide that walks you through all the ways you can interact with Alice. The book forces you to use a horizontal orientation so it can display two pages at a time. The artwork usually occupies one side of the screen, inviting readers to swipe and tap it to reveal animations, moveable elements (like pulling back a curtain), and sound effects. The written portion can be read like a regular book, but the app features a narrator that really helps pull you into the overall story. For kids, these things could mean the difference between asking when they can watch TV and becoming obsessed with finishing the book.

My mom is an elementary school teacher, so when I visit her classroom I usually try to spend time reading to the class of first graders. It’s amazing what kids respond to, and what they’re completely uninterested in. For instance, I couldn’t get any of them to sit still when reading seasoned creators Neil Gaiman and Dave McKean’s The Day I Swapped My Dad for Two Goldfish, but the extremely worn-out pirate book I randomly picked up afterward had them all captivated. Something tells me Alice would do just fine keeping a gaggle of kiddos attentive.

The Alice app is hardly the only example of storytellers seeking to advance a story by adding interactive elements thanks to tablet’s hardware. Digital comic book startup Madefire also produces a platform that allows artists to add additional effects to a graphically told story, such as elements on the page that move, sound effects, and more.

But Paletz said the technology used for Alice was specific to the app itself, so it could be a while before you see his next interactive book/app. He did tell me he is currently working on the Alice In Wonderland followup Through the Looking-Glass, but he didn’t give any indication on when it might be finished.

As for the Alice app itself, the book is available on the iPad for $5, but those that are curious about trying out the book first can download a free “lite” version that contains a sample of the story. It’s also available on Android for $2. For a closer look at Alice in action, check out the demo video embedded below.