The roguelike FPS (or roguelike-like games, a ridiculous moniker if one ever existed) takes a traditional shooter and adds elements from roguelike role-playing games. The subgenre has exploded on PC, with several indie developers releasing projects in the past year.

The RPG type has been around for decades, but a half-dozen developers say they had the same idea at nearly the same time in just the past couple of years. What if you took a roguelike and applied its elements to a shooter, instead?

Drop the things from the genre that aren’t commonly found in FPS games, such as turn-based gameplay, the fantasy setting, the tile-based graphics. Keep what makes the RPG games brain exploders, such as the permadeath — no revives for you — and the random levels. You end up with a shooter that is fiendishly difficult and fun to both program and play.

“You have to be active instead of passive to enjoy these games, you know? Interested and curious,” said Terri Vellmann, the developer of Devolver Digital’s Heavy Bullets, a roguelike FPS that launched recently for $10 on Steam and Humble. “And usually you have to enjoy a challenge. The constant deaths can be a turn off for some people.”

Take a super-difficult RPG and add a gun

The roguelike genre’s name comes from the original 1980 RPG Rogue and usually includes conventions that were part of that experience: permadeath, computer-generated levels that rebuild differently each time you die and start over, unidentified items, time pressure, sprite-based and tile-based graphics, turn-based gameplay, and a high-fantasy setting.

Those RPGs are hard, thinkers’ titles, with high replay value because of the randomly generated maps and challenges. Even the items your character receives are often random. 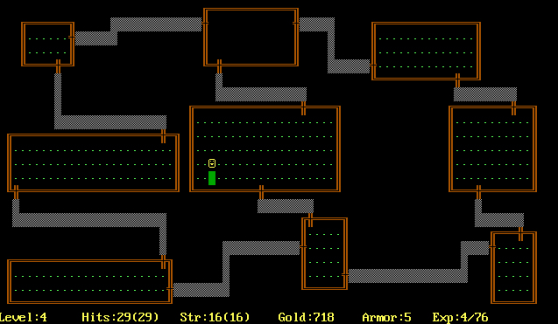 Above: Now that’s a humble beginning: Rogue, the inspiration for a new FPS subgenre.

The newest entry in the roguelike FPS game, Heavy Bullets offers neon-colored, blocky animation filled with the core elements of the genre. In addition to permadeath and random levels, it adds the element of inventory management.

You can only carry six bullets at a time while retrieving and reloading bullets after you use them. That’s a challenge when multiple enemies are throwing themselves at you with increasing speed around corners you’ve never seen before. See for yourself:

My own experience playing Heavy Bullets started by navigating a maze of hallways strangely overgrown with neon-colored plants. I saw an enemy — a coal-colored blob with big, white teeth — and coolly fired. I then got jumped by an alligator-shaped plant and defended. Two more beasties attacked, and I barely got the second before my screen flashed with damage. In the next set of rooms, I was attacked by three or four, failed to see one, fired my remaining shots wildly and died. Rinse and repeat. (I consider myself a competent, but not outstanding, player of traditional shooters.)