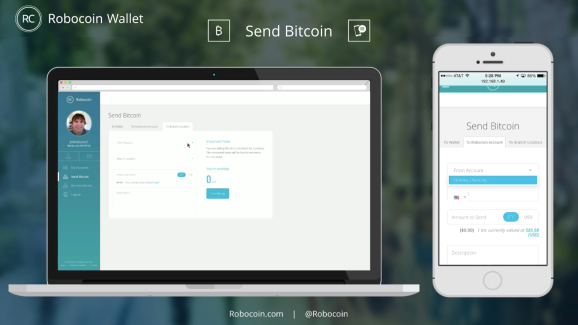 Robocoin, which makes Bitcoin ATMs, wants to be your bank some day. Today, in pursuit of that goal, the company is rolling out its digital wallet.

Robocoin will be the second new Bitcoin wallet this week. Yesterday Circle announced its wallet, geared towards people who aren’t necessarily technologically inclined. Although there are a wealth of competitors in this space, Robocoin stands to offer something potentially valuable.

For one, says CEO Jordan Kelley, Robocoin is not beholden to the existing Bitcoin infrastructure, i.e. the exchanges.

“We were at their mercy. If one of them went down, so did the user experience,” Kelley says. But, launching a series of Bitcoin ATMs around the world has taught the company to trust no one.

Utilizing Robocoin’s international network of 45 kiosks, the company promises to get users instant access to Bitcoin and cash. That may not seem like a big deal, but considering the average Bitcoin transactions takes at least 10 minutes, it’s more than many wallets can guarantee. To do this, Robocoin basically operates like a small bank.

In lieu of directly accessing a Bitcoin exchange, each Robocoin kiosk or ATM is connected to what the company calls “an operator wallet,” which changes cash out for Bitcoin and vice versa. Robocoin relies on its internal network of users for cash and Bitcoin reserves.

In practice it looks like this: a Robocoin user goes to a kiosk and logs into their account. Once inside the account, she can either deposit cash and change it into Bitcoin or exchange Bitcoin for cash instantly.

Using Robocoin’s Exchange Connector API, operator wallets can replenish stocks of Bitcoin and traditional currency. “The Robocoin Connector lets Operators use their preferred exchange to automatically replenish after customer buys or unload after customer sells,” a company representative told me in an email.

Robocoin is as secure as you might expect in 2014, considering the rash of thefts that occurred last year from major Bitcoin institutions like Mt. Gox. Kelley explains that 90 percent of the company’s Bitcoin are kept in offline storage, though the wallet itself is secured with multi-signature architecture. Accessing an account online requires two-factor authentication and accessing an account at a kiosk requires three-factor authentication: account number, PIN, and palm scan.

The one main drawback to using Robocoin is that there’s no mobile app, though I’ve been told apps are in the works for both iOS and Android. In the meantime, customers are restricted to using a mobile browser to access their wallets.

Because Bitcoin right now acts as such a parallel system to traditional currency, I ask Kelley if he thinks if the Bitcoin system will eventually come together with traditional banking networks.

“I think that we’re going to see a future where the two will merge. We want to be in a good position when that day comes,” he says.

Like Circle, Robocoin wants to be accessible to all users, not just the digitally inclined. He waxes poetic about a future where people around the world, who don’t have access to bank accounts, will be able to rely on Bitcoin (and Robocoin) for storing money. But that’s still a bit of a dream.

Robocoin only has 45 kiosks worldwide where people can both deposit and withdraw money, with the majority in the U.S., Canada, and Europe. Also, you have to wonder whether there might be a learning curve for people who don’t have access to basic banking in adopting Bitcoin — not to mention a lack of incentive for embracing Bitcoin as opposed to a more convenient local currency.

While Robocoin may have an interesting approach to Bitcoin banking, there is long road ahead to becoming the bank of the future.