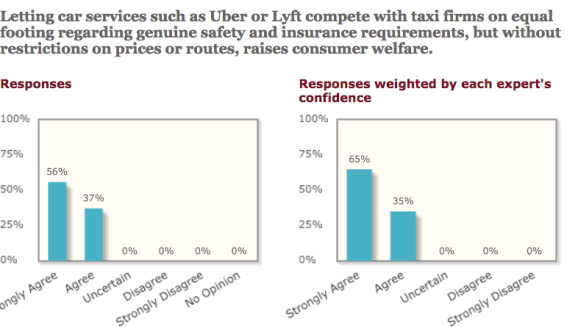 Economists generally disagree about nearly everything, as the famous University of Chicago poll of America’s top economists finds. It typically sees wide variation in opinion on everything from net neutrality to airline mergers.

When asked whether the government and taxi unions should stop interfering with ride-sharing services, every single one agreed that Uber, Lyft and their competitors should be let free. Specifically, the economists were asked if the government should let “car services such as Uber or Lyft compete with taxi firms on equal footing regarding genuine safety and insurance requirements, but without restrictions on prices or routes, raises consumer welfare.”

56 percent strongly agreed and 37 percent agreed. Although three respondents did not answer, no one was undecided.

“Yes. yes. A thousand times yes. Instead, try calling for a cab on Saturday night from the south side of Chicago and see what happens,” wrote Austan Goolsbee, former chairman of Obama’s Council of Economic Advisers.

Recent studies seem to back up the economist poll. One study from Berkeley found that Uber was far more efficient at picking up passengers; 92 percent arrive in under 10 minutes, compared to 16 percent of taxis. Another study from MIT found that 95 percent of all taxi trips in some areas of New York City could be shared. Both Lyft and Uber are now offering carpooling options, which could significantly decrease the number of cars on the road.

Governments around the world disagree. California threatened to shut down Uber and Lyft’s carpool service. German courts have gone back and forth over bans on ridesharing. The most recent move, as of yesterday, is to have Uber use regular German taxi drivers in their service. Belgium has essentially banned ridesharing apps.

With both the public and consumers fighting for less regulation, it’s unknown how long governments can continue their trend in heavy-handed strictures.