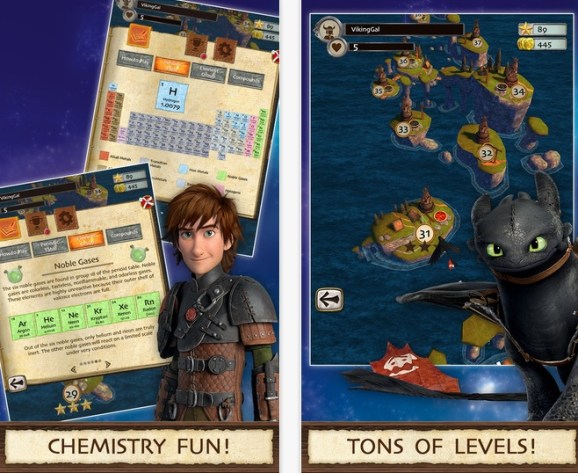 It’s based on DreamWorks Animation’s How to Train Your Dragon movie series. Kids match elements from the Periodic Table to create compounds in a way that seems a lot more fun than rote memorization.

The School of Dragons: Alchemy Adventure is the first companion game to School of Dragons, JumpStart’s popular multiplayer game. The Torrance, Calif.-based JumpStar specializes in educational games for kids. This new effort shows the company is trying to change with the times by moving into mobile games, which reach a much broader audience but aren’t that easy to monetize. School of Dragons launched as a multiplayer online game in July 2013. Rewards in the mobile and online game are linked.

“Matching games are incredibly popular in today’s mobile gaming market. Most of these games incorporate items like candy or jewels, but School of Dragons: Alchemy Adventure provides a fun science twist,” said Lori Berget, an executive producer for JumpStart, in a statement. “Alchemy Adventure uniquely integrates chemistry into an entertaining puzzle game allowing players to learn more about elements, compounds and the periodic table.”

This “chemical” puzzler 40 levels of match-3 gameplay, which teaches kids about metals, halogens, and noble gases.

“Not only are we introducing the first educational match-three game to the market, Alchemy Adventure also marks the next critical step in the expansion of the already powerful School of Dragons educational brand,” said JumpStart CEO David Lord in a statement. “By launching this innovative mobile game in alliance with DreamWorks, we’re continuing to spread the excitement of the How to Train Your Dragon franchise to even more audiences across the globe.”