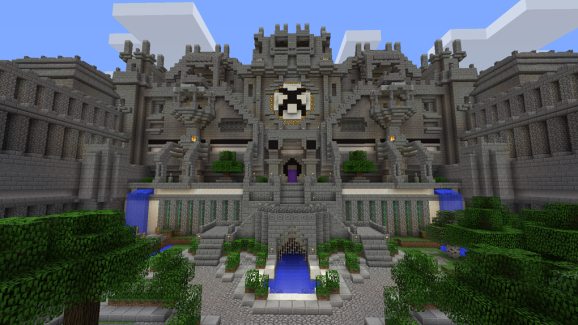 Even Microsoft games are appearing on the PlayStation 4 first.

Microsoft revealed today that it is releasing Minecraft: Xbox One Edition on disc. That is strange because Sony confirmed that the PlayStation 4 is getting a disc version of Minecraft earlier this month, and it will debut on Sony’s system Oct. 7. That may not seem weird, but remember that on Sept. 15, Microsoft revealed a deal to purchase Minecraft and developer Mojang for $2.5 billion in cash. Despite spending that money, Sony’s system is getting the Minecraft disc a month before Microsoft’s. Minecraft: Xbox One Edition will launch at retail on Nov. 18 for $20.

While Minecraft first debuted on PC in 2009 and on Xbox 360 in 2012, its popularity hasn’t waned. In fact, the physical Xbox 360 version, which didn’t debut until 2013, was the ninth best-selling new physical game at U.S. retailers last year. A physical version on the new systems is likely going to sell well also.

This announcement comes just weeks after Minecraft launched digitally on Xbox One (Sept. 5) and PlayStation 4 (Sept. 4) through their respective digital stores, and it’s not surprising that the physical version for those systems is coming out in time for the gift-giving holidays.

Minecraft is an incredibly strange property now that Microsoft has taken over ownership. It’s possible that the PS4 game will become the first Sony system release to feature a “Microsoft Studios” logo on the box. Regardless of how weird it all seems, Microsoft did promise to continue supporting Minecraft on all other platforms, and that includes Sony’s.

We’ve reached out to the two companies just to ensure that Minecraft: PS4 Edition is still coming out on disc in October, and we’ll update this story with any new information.