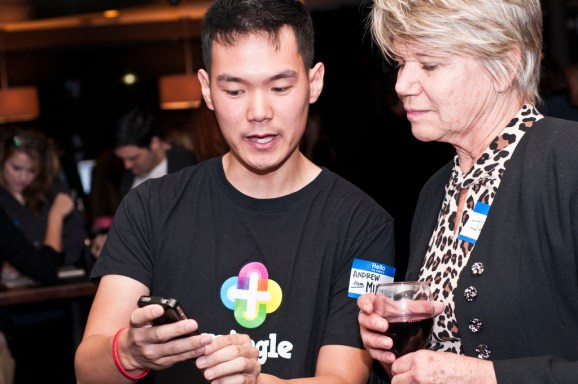 Last night I gave the kickoff talk to the West Michigan Policy Forum. I did my riff on Startup Communities and followed it up with a short Q&A on issues specific to Michigan’s entrepreneurial scene.

Afterwards, Amy and I went for a walk to the Apple Store on Fifth Avenue in Manhattan to buy a lighting-to-HDMI adapter, so we could watch Print the Legend on the TV in our hotel room. We succeeded in surviving the 24×7 madhouse that is the Apple Store on Fifth Avenue, got the right cable, but were unable to hack our hotel TV which refused to do anything other than respond to a hardwired magic box. So we watched Jaws on TV instead (amazingly, neither of us had ever seen it.)

The juxtaposition of the two experiences (my talk vs. the casual madness of the Apple Store) combined with a line from Peter Thiel’s book Zero to One: Notes on Startups, or How to Build the Future

reminded me of another line that I heard at the UP Global Annual Summit in Las Vegas over the summer. Thiel’s line was about uniforms and how his firm Founder’s Fund immediately rejects any entrepreneur who dresses in a suit and tie. Instead, his firm believes in the Silicon Valley uniform of jeans and a T-shirt, and he gives a visual example of Elon Musk wearing an “Occupy Mars” t-shirt compared to Brian Harrison, the chief executive of Solyndra, looking very dapper in his classical suit and tie. I’ll let you guess which entrepreneur created several multi-billion dollar companies and which entrepreneur saw his extremely well funded company go bankrupt.

The line I heard in the context of startup communities was “the collision of the tucked and the untucked.” This referred to the startup community entrepreneurs in untucked t-shirts interacting with the startup community feeders (government, academics, big companies, investors, and service providers) who tend to have their shirt tucked in, even if they aren’t wearing ties.

The magic in growing the startup community is to get the tucked and the untucked to hang out. Your goal should be to generate endless collisions between different perspectives, ideas, peoples, and culture. Rather than segmenting things into the old guard and new guard, mix it up. Get everyone working together.

Don’t let parallel universes evolve – you want one big, messy network continually changing. Make sure you are creating situations for the tucked and untucked to get together, be together, and work together. Have some fun with it, including formally reversing roles at a Sadie Hawkins like event, where the tucked wear t-shirts and the untucked wear suits.

Tonight I’m at a dinner with the Blackstone Foundation and several executives at the Blackstone Group talking about startup communities and entrepreneurial ecosystems. The invite says “business attire” which I expect for many will be “tucked.” I’ll be in my standard uniform – jeans, Toms, and a zany Robert Graham shirt, that will most definitely be untucked. It should be fun.