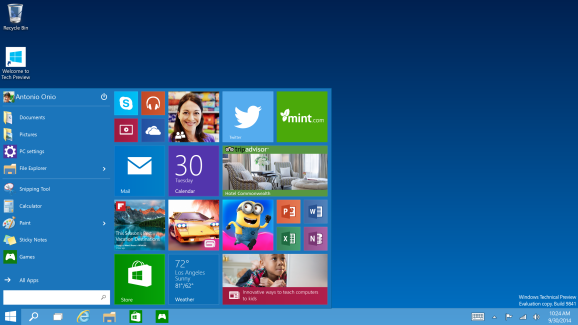 Yesterday, Microsoft made a preview build of Windows 10 available as part of its Windows Insider Program, allowing anyone to install the new OS and offer up some feedback. The final version of Windows 10 won’t be shipping until late 2015.

As I explained earlier this week, Windows 10 feels like an outright apology by Microsoft for all of its missteps with Windows 8. It’s more focused on desktop users and productivity rather than on touchscreen devices. And for plenty of Windows users, that alone may tempt them to upgrade from Windows 7.

Windows 10 is go, love the first question that pops up when I hit the Start button pic.twitter.com/YIhZ72152w

I downloaded the Windows 10 preview build from Microsoft’s site, slapped it on a USB drive, and installed it on a loaner Surface Pro 3 that I have lying around. I chose to upgrade the Surface Pro 3, rather than perform a clean install. Surprisingly, I didn’t have to create a bootable USB disk or extract the ISO installation file — I just copied the ISO to a USB drive, clicked into the ISO, and hit Setup.

The entire process took around 45 minutes.

Once up and running, Windows 10 looks almost exactly like Windows 7. But hit the Start button and the differences become clear — Windows 10 features a traditional Start menu with the addition of Live Tiles, the big and blocky tiles from Windows Phone and Windows 8.

After living with Windows 8.1 on my desktop for the past year, I was surprised by how much I missed the Start menu. It’s just easier to navigate with a keyboard and mouse than Windows 8’s touch-friendly Start Screen.

Oh, and it looks like the big Start screen is still an option for those crazy people who want it http://t.co/noqwSMwLcb

Microsoft didn’t kill the Windows 8 Start Screen entirely, though. You can enable it by hitting a checkbox in your task bar’s preferences.

Another big change with Windows 10 is the ability to run modern Windows 8 apps in Windows. It feels a bit weird at first, but I found that it made it much easier to run those new apps alongside traditional Windows software. Some apps, like the Twitter app above, have some strange restrictions in terms of how small you can make them, though.

For the most part, the Windows 10 preview worked well on the Surface Pro 3. I only had one hard crash in my few hours of testing. (Reminder: Don’t install this on your primary PC.)

I wasn’t able to test out the Continuum feature, which changes the Start menu from being mouse-friendly to being touch-friendly when you remove your keyboard. Microsoft’s documentation for the Windows 10 preview build doesn’t mention Continuum, so it’s likely something that will show up in future builds.

Given just how early this preview version of Windows 10 is, and given that Microsoft plans to announce more consumer features early next year, it’s hard to make any final judgments about Windows 10 at this point. I’m glad to see Microsoft focusing on its core desktop users once again, but I’m worried that Windows 8’s poor reception will scare the company away from taking huge risks in the future.