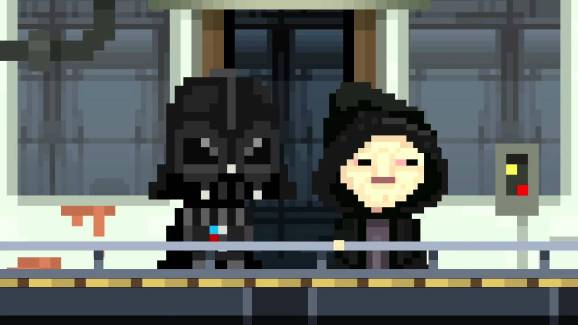 The pixellated villains of Tiny Death Star cried out and are suddenly silenced.

That’s what I’m trying to tell you, kid. Tiny Death Star and Star Wars: Assault Team ain’t there. They’ve been totally blown away.

We contacted Disney, but the company declined the opportunity to comment. We can confirm though that it is permanently removing both games from the app stores.

One Star Wars game that you can still download is Star Wars: Commander. This is Disney’s Clash of Clans-like strategy game (although it tries to do some things to separate itself from Clash of Clans). Commander debuted just a few weeks ago, and it is already one of the biggest successes for Star Wars on smartphones and tablets.

Another Star Wars game that lives on is publisher Konami’s Star Wars: Force Collection. This card-battler is also making money, as it’s the 26th highest-grossing game on iPhone in the United States.

It’s worth noting that the new Star Wars: Rebels animated series debuts tonight on the Disney Channel. It’s likely that this will drive people to search out Star Wars-related content, and the corporation wants to guide players into its more lucrative apps rather than games like Tiny Death Star and Star Wars: Assault Team, which are now dead platforms.

If you already have Tiny Death Star or Star Wars: Assault Team on your smartphone or tablet, you should have no problem continuing to play them. But despite that I previously downloaded (and then deleted) both games, I cannot find an option to reinstall them through Android’s Google Play store.