When colleges are re-ranked by how graduates do in the job market, only a few of the conventionally prestigious schools make the top of the list. LinkedIn mined its massive dataset of professionals to see what colleges where producing employees at the most desirable firms in a handful of industries, including finance, tech, marketing, and media.

For brevity’s sake, here’s a snapshot of the top 3 schools in various industries: 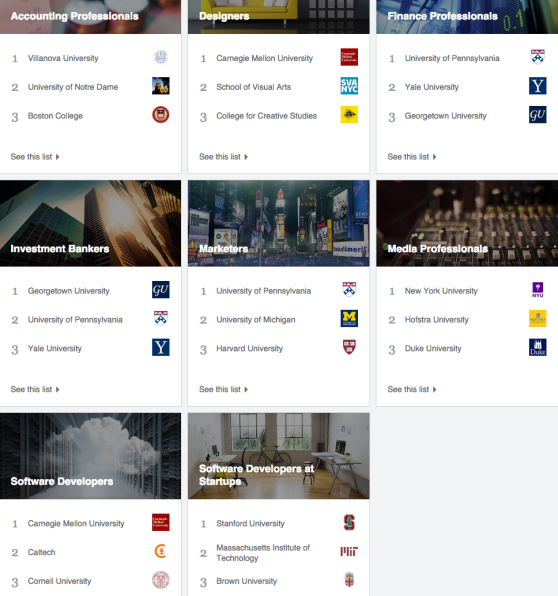 Careful readers will notice that Harvard isn’t #1 in any of these industries. In many instances, the Ivy Leagues don’t even break the top 10. For designers, the only household name colleges are Carnegie Mellon (#1) and Stanford (#6). Most of the rest are smaller creative arts schools.

Startups are pretty heavy on the Ivy Leagues, though. The top 10 schools for startups are:

A similar list of household names is found in finance and banking, but not in media, design, accounting, and non-startup software development.

It’s worth noting that LinkedIn rankings should be taken with a grain of salt. It is a voluntary social network, where a fraction of the population joins and a smaller fraction of users list their college. Moreover, the social network might skew towards less successful people. Linkedin is comprised of people looking for a job (or looking to move up). There’s less of an incentive for people in high demand to bother marketing themselves.

Still, it’s an informative database. Most interestingly, LinkedIn defines “desirable” job as a place people are likely to leave their current job for (so, for instance, if many Googlers join Facebook, Facebook would be more “desirable”). This kind of info is unique to the LinkedIn database and gives its ranking a competitive advantage over something like U.S. News & World Report.

The Obama administration has been attempting to build its own ranking but has been met with aggressive opposition from faculty unions, who generally don’t want any sort of vocational ranking.