Reviews of Alien: Isolation are coming in this weekend on the heel of the game’s release (that’d be October 7, for those not keeping track). Thus far the game is enjoying relatively positive reviews, with Gamesbeat giving the latest offering from Creative Assembly a solid 83/100. Most other critic reviews are around the same mark.

Alien franchise fans breathing a sigh of relief via the reviews (from the previous horror that is Colonial Marines) and are interested in grabbing the game have a variety of options in terms of preorder deals. Check out the breakdown below.

(All the above are Steam keys.)

For the Nostromo Edition, you can safely consider it as the standard edition of the game, titled as such due to the fact that all preorders includes the “Crew Expendable” DLC pack, giving you story content to see the original crew reunited aboard the Nostromo (hence, Nostromo Edition).

The Season Pass is just as you’d expect – a series of DLC for future content, mostly in the form of Survivor Mode map packs (three in each pack, a total of five packs in the Season Pass). As reported by Sega and Creative Assembly, all the maps are due out by March 2015, so you’d have plenty of new content to experience in Alien: Isolation in the next six months.

While the savings from the Deluxe Edition that bundles the Season Pass of Alien: Isolation is tempting, we’d suggest grabbing the standard Nostromo Edition first to see if you like the game. 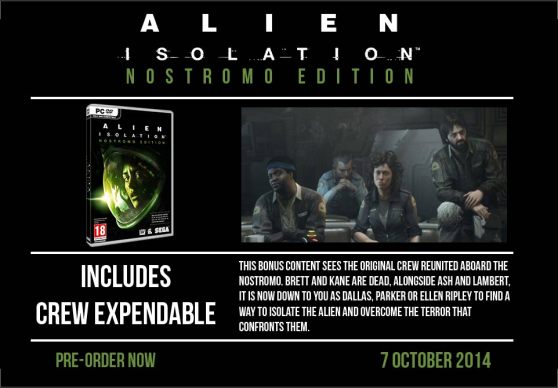