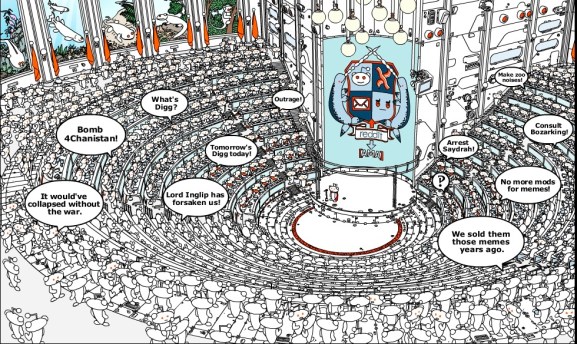 As one of the biggest, most active communities on the Internet, every single move Reddit makes gets scrutinized, analyzed, and philosophized. If Reddit sneezes, discussion will be had. And until now, that didn’t mean much from a company standpoint because Reddit’s business was perhaps the least exciting part of it.

Then Reddit got a massive $50 million investment, and delivered an ultimatum to remote workers to either relocate to San Francisco or be let go. And the Internet sounded off in grand protest. There’s at least one big reason why…

See the thing is, people are likely upset because they look at Reddit as the anti-establishment — that if these guys (aka Reddit) can rise to the top without becoming a Yahoo or Facebook, then there’s hope for all the people in Salt Lake City, Nashville, Atlanta, and every other middle-of-nowhere city in the country with a decent Internet connection. People who live outside of Silicon Valley can still be all-stars in the technology world — and Reddit is a big part of that. So people were understandably rattled, and probably feeling more than a little defensive about this issue. (That’s not to say there wasn’t also plenty of healthy discussion about business philosophies of remote workers, too.)

In other words, it feels a bit like Reddit is saying no one can possibly run a successful business with remote workers. Not exactly fair, but not every company is Reddit, either. If Reddit as a company screwed one thing up, it was most definitely in not realizing this fact before publicly disclosing information about the new policy. If it screwed two things up, it was in having this discussion in a public Twitter thread before considering how it would play out.

But like it or not, Reddit is a business — one that has to justify the $50 million it just took on. So if CEO Yishan Wong believes this is a way to make the company stronger, then so be it. But if this strategy doesn’t work (and Reddit remains unprofitable), he may have sacrificed an important aspect of his company’s identity that won’t be easy to recreate.

And then there’s the many people who believe embracing a remote workforce is possibly the better strategy.

Before much of the community reaction to the remote worker policy took place, I reached out to Daily Dot cofounder and editor-in-chief Nicholas White for his thoughts. Considering that the Dot has a large remote workforce and also dedicates itself to covering Internet communities, his take on the situation is enlightening: “Obviously, we’ve had to think through the whole remote employee thing ourselves — since we write about the Internet as the world’s largest community, a virtual country where people live, we felt we had to embrace a distributed workforce.”

On the one hand: There is a lot of communication that happens naturally when people are in the same room that doesn’t occur in a chat room — individual interactions are richer and information spreads through an office, whether you want it to or not. I personally enjoy my coworkers and I like to hang out with them.

However, I personally think that insisting everyone is in the same room is an enabler for bad or lazy management — at least it has been for me. If you think through how exactly people need to work together, what precisely needs to be communicated, and clearly define everyone’s objectives, then it isn’t necessary for everyone to be together. Augment that with the right intensive face-to-face interactions when necessary, and you’re golden. And the thing is, every team should be doing all that ANYWAY and being in the same room makes people often feel like they don’t need to and so I think we’ve actually ended up with a better run company because we’ve been committed to a distributed team. Plus, then you have access to the best talent in the world wherever they are.

White isn’t the only one who thinks having a remote workforce is ultimately beneficial. And the Daily Dot is hardly the only company that’s been able to excel without having all their workers in the same location. (Hell, oDesk is even offering the non-SF Reddit employees a job.) But for now, we’ll just have to see how the situation plays out.