Quantum computing offers a lot of promise as well as a lot of threats. Computers with this technology haven’t been built yet. But once they can be, they can offer blazing-fast computation in parallel — or processing many calculations at the same time. A quantum computer — named for the principle of quantum mechanics physics that holds that matter and light can exist in multiple states at once — could be so fast that it could crack any encryption easily. And that would enable cyber-criminals to have a field day.

Qubitekk, a two-year-old startup founded by former Department of Energy scientist Duncan Earl, hopes to get there first. The San Diego, Calif.-based company is building cryptography systems that are enabled by quantum computing and can be more secure than what we have protecting our banks, infrastructure companies, and technology secrets today. Earl, who spent 18 years at the Department of Energy’s Oak Ridge National Laboratory, did a lot of fundamental work on quantum computing for national security and other applications. He has a doctorate in physics, and he believes that the time for real-world quantum computing has come.

We caught up with Earl recently to talk about quantum computing. Here’s an edited transcript of our interview with him. 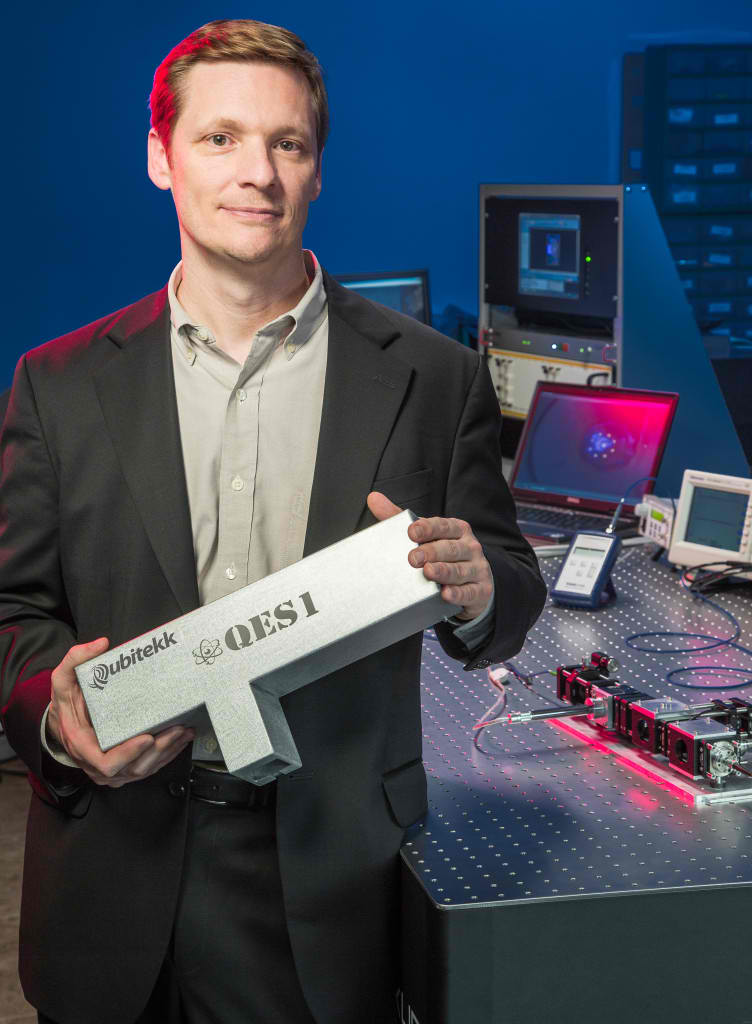 VentureBeat: Could you tell me about the company, its origins, and the technology?

Duncan Earl: We’re trying to make quantum computing and cryptography and all these things accessible to the layman. Hopefully, as the month goes by, it’ll become easier and easier to talk about. I spent about 20 years working at Oak Ridge national laboratories on national security work. A lot of it was related to quantum computing and cryptography. I’d previously also spun out businesses from Oak Ridge, so I had some entrepreneurial experience.

Back in about 2012, I started Qubitekk. At the time we were called Gridcom. The idea was to take some of the advances in quantum information sciences, like quantum computing and cryptography, and see if we could bring about commercial products, see if we could get some early market traction. We had some early investment from groups in Bakersfield, California. Primarily oil and gas and [agriculture-related] guys. It was a seed round. To date we’ve raised about $2 million. The company’s been operating on that, as well as some of these R&D grants we can talk about in a moment.

The motivation behind it is, as a researcher, when you talk about quantum mechanics, in the past it’s been very theoretical. It’s almost like magic. It doesn’t seem real. But there’s a clear shift occurring where this cool theory is becoming a commercial reality. There are systems and devices you can build based on these phenomena that can do things today. They can revolutionize our world, especially in the communications and computing arenas.

Sensing that trend, I wanted to make sure I got out ahead of it. Our early investors recognized it as well. We jumped in early. Since then, a number of companies are starting to form. We’re starting to see a critical mass gathering to see these products move forward.

Related to this DOE grant we just had a press release on, it was focused on securing the electrical grid using quantum cryptography. The U.S. electrical grid, there are maybe 30 or 40 million machines that control it, and they all need to communicate with one another. Keeping secrets isn’t the issue here, but they need to have good data integrity. When one machine talks to another, we need to make sure everyone is who they say they are. Otherwise the control of the electrical grid falls apart.

The ability to authenticate users and ensure data integrity is something that people overseeing cybersecurity have been concerned about for a long time. It’s a system that can easily be hacked right now. With things like quantum computers in the coming years, it could really easily be hacked. If you can hack the electrical grid and turn off the power, you can disable the military, the ability of people to govern themselves, the financial institutions. It could obviously have a big impact. That’s we have guys like [former U.S. Secretary of Defense] Leon Panetta out there talking about cybersecurity related to the grid — I think “cyber-Pearl Harbor” is what he said.

VentureBeat: Could you talk about the basics of the theory? What does a quantum computer take advantage of, and what should it be able to do?

Earl: I should say that we are playing, in some respects, both sides of the fence. At Qubitekk, we’re making the components that can build a quantum computer, and that’s what could cause all this turmoil in the security space. But we’re also making the quantum cryptography systems that could protect you in the future. Fundamentally, they all work on the same techniques.

For us, that’s entangled photons. Entangled photons are made in a crystal. They’re a special kind of particle. You can imagine a little crystal that maybe looks like a glass toothpick. We have one about 30 millimeters long and very thin. We launch regular laser light into the end of that crystal. It’s blue light, blue photons. Billions of blue photons pass into this crystal, and every now and then, one of them, because of the crystal’s properties, will be absorbed by the crystal. Then, it will re-emit it, but it won’t re-emit it as a blue photon. It’ll re-emit it as two red photons.

These two red photons are like twins. They’re born at the same time and exactly the same position in space. This gives these two particles a special relationship. That’s what we call entanglement. We have a device called a QES1 that filters out these photons, which we sell commercially. Now, anybody can buy one of these. It’s a plug and play device. You put light in one end, and you get entangled photons out the other.

The reason why these special entangled photons are important is that they have two critical properties. The first is that they exist in this special state, a superposition state, so that if you were to mess with one of the photons, the other photon will be able to measure that. I take one of these photons and send one to the moon and the other to Pluto, if anything interferes with one of those photons, it’s immediately detectable at the other end. They’re tamper-proof particles or maybe a better word is tamper-indicating.

The other feature of these entangled particles is that they can be in two places at the same time. You can condition them to where if one of the particles comes to a crossroads — somewhere it can go to the left or to the right — it will essentially go both directions simultaneously. They say that those particles are in a superposition of states. That’s really powerful because it means that if you want to do some sort of computation where you need your bits to go down lots of different paths, you can go down lots of those paths simultaneously with these particles. That allows you to get massively parallel computing. That’s what quantum computers are based on.

What we’re doing with the DOE is taking these entangled photons and building a system that’s meant for GPS security. You have many devices that require a GPS time stamp in order to know what time of day it is. It’s very critical for timing operations that nobody [messes] with that GPS signal. Unfortunately, it’s an easy thing for hackers to spoof. We’re building a device that allows us to authenticate those GPS signals using the tamper-proof properties of entangled photons.