If Assassin’s Creed IV: Black Flag challenged fans as to what an Assassin’s Creed game could or should be, Assassin’s Creed Unity is a deliberate pendulum swing to the series’ roots. The way Ubisoft spokespeople has pitched Unity, you’d think this game represents an unofficial reboot to the series, a reining in of sorts, primed to make the most of the one-year-old PS4 and Xbox One.

If there’s any one aspect of Unity that sets itself apart from all prior Assassin’s Creeds, it’s its density. From the packed swarms of angry French peasants to the city of Paris itself, this is density on multiple levels. Ubisoft’s Paris is a six-district open world that expands from within, where the interiors of buildings feel larger than what the exteriors imply. Even in the late 18th century, Paris already had a rich history, one that Ubisoft has completely dipped into so as to make the most of this singular setting (although the game does spend its initial events adjacent to Paris in Versailles). 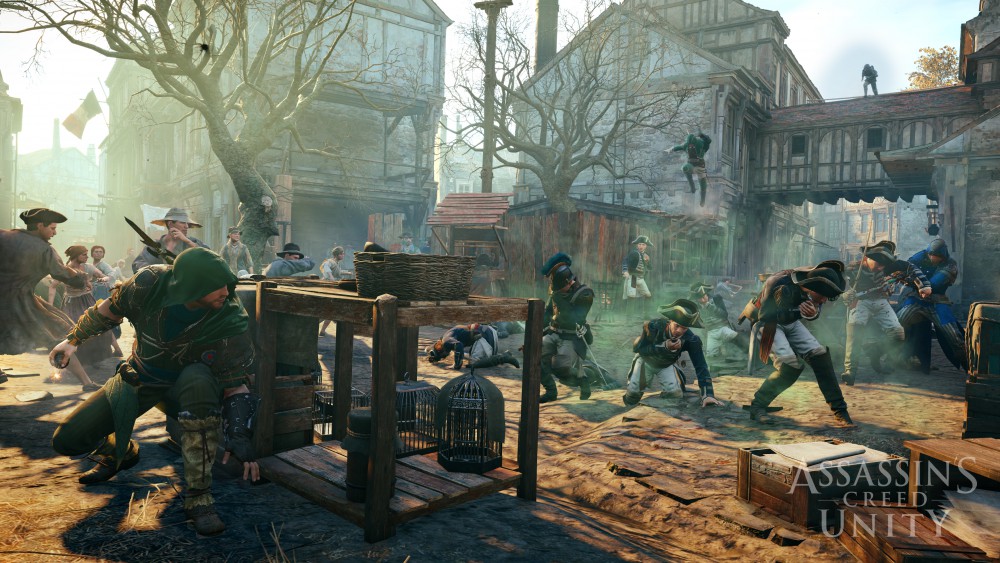 Above: Believe it or not, you can manually crouch in this latest Assassin’s Creed

Compared to the immense expanse of the seas of Assassin’s Creed IV: Black Flag, one might think Paris would be much easier setting to navigate through. That’s not necessarily the case when you’re trying to weave through crowds of rioters. While not one camera angle showcased the thousands of NPCs that Ubisoft has boasted, the hundreds of dissatisfied Parisians were more than enough to deal with when having to travel to the next objective marker.  And that doesn’t even include the local law enforcement and the Templars; both groups have an eye on you, so be ready to run often. It’s density meeting chaos, both of which will evolve based on what missions you take, optional or otherwise. For all the promising changes going into Unity, the game is not short of familiar Assassin’s Creed mission types, for better or worse. That includes the love-or-hate tailing missions.

It’s a production that wants to prove that Assassin’s Creed has grown, especially vertically. I appreciated the single button simplicity of the parkour in Assassin’s Creed III and IV. In adapting to the tall structures of Paris, you now have to decide whether you want to go up or down as you’re traversing walls and rooftops. Such minor changes do not take long to get used to, and that includes (finally!) the implementation of manual crouching.

When thinking about the time setting of 2012’s Assassin’s Creed III, continuing the thread of 18th century revolution does not feel coincidental. It makes one all the more excited for where the series will go to after this year. Between Ezio’s trilogy and Assassin’s Creed III there have been more than enough storylines of revenge and revolt. While these elements are also in Unity, Ubisoft hopes its unique murder mystery narrative will add something new to the series. With every new story mission, protagonist Arno Dorian discovers a new clue that will lead him closer to the instigators of the revolution in France. The quest for information has always been a key driving force in the series, though this investigative approach in Unity promises to be more focused. It’s a change over many prior Assassin’s Creed games that simply present the hero with a blacklist of targets. 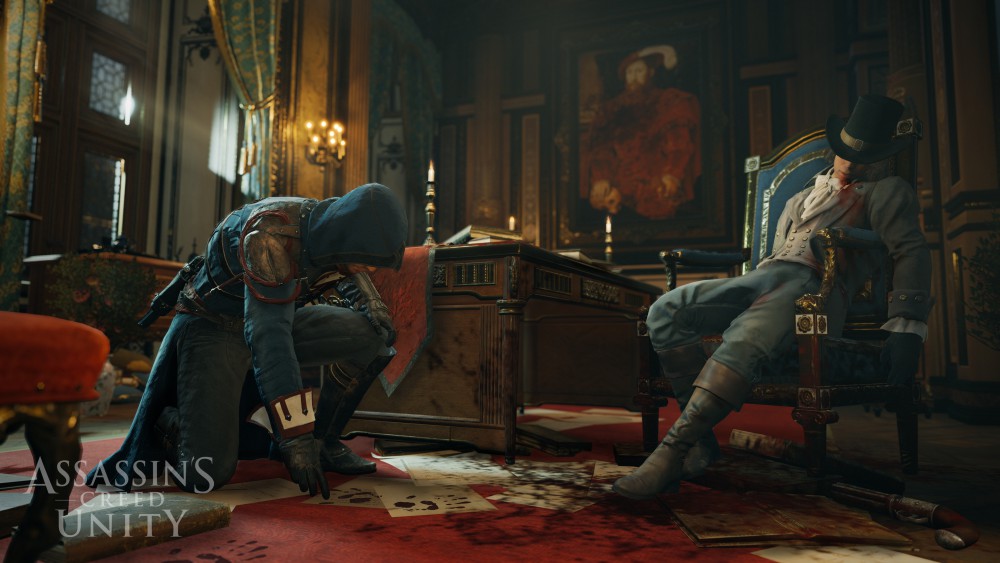 Above: With all the detective work in Unity, you’d think this was called Assassin’s Creed Noir

Investigations beget new mysteries in the game’s myriad optional missions. It’s just one type of assignment in a playlist of side content. Assassination contracts aren’t the straightforward killing missions of prior Assassin’s Creeds; these are deeper, longer assignments heavily inspired by Parisian legends. Same goes for Unity’s treasure hunts, where clues lead to more clues often based on the predictions of Nostradamus.

As branding and marketing goes, “Unity” is a fitting subtitle for an Assassin’s Creed installment that places a lot of emphasis on multiplayer. Player connectivity in this series has slowly built up ever since Assassin’s Creed: Brotherhood. Unity does not feel like a culmination of all the work and knowledge the Ubisoft’s multiplayer teams have gained but rather a natural evolution.

I gravitate toward campaign/mission style playthroughs not only because of defined goals you cannot find in adversarial multiplayer, but also for the drive to “beat” the developers on the challenges they’ve laid out. This is why I appreciate the wealth of assignment-based multiplayer missions in Unity as well as the main story itself. While the main story missions are strictly single player, a lot of the side content within the campaign is accessible in teams. Much like Ubisoft’s Watch Dogs, each player’s avatar is represented by the protagonist while their partners in crime appear as randomly generated assassins. Whether it’s a cooperative playthrough or a foursome session, being in sync with others through headset mics offers teamwork gratification akin to Tom Clancy properties like Splinter Cell and Ghost Recon: Future Soldier. 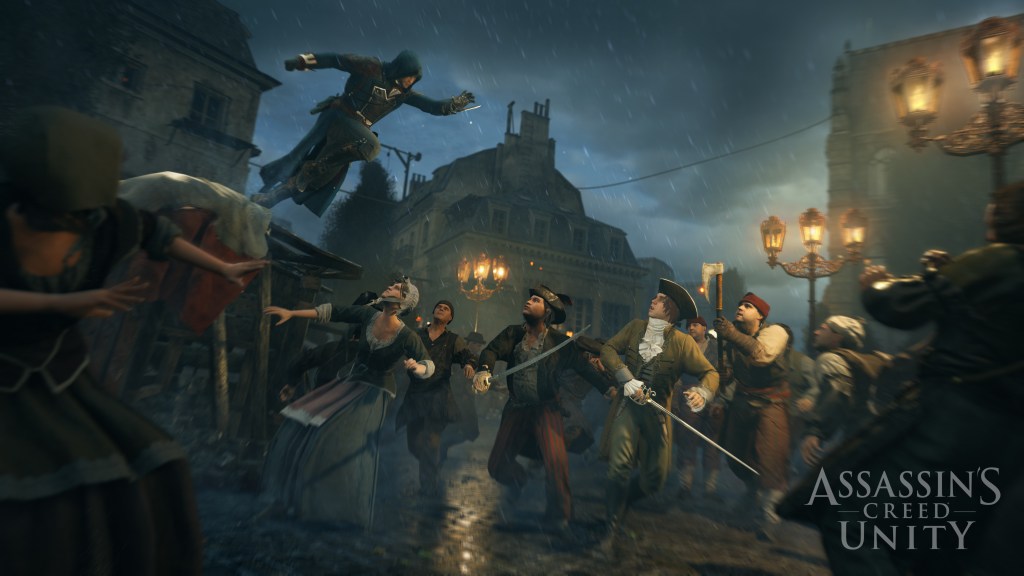 Above: One of the many ways to get through the crowds in Assassin’s Creed Unity.

In the case of my hands-on session, synchronicity was all the more crucial in a confining but large Parisian mansion. The mission of retrieving a stolen painting was straightforward enough. The catch is to discern the real painting from the fakes, while also navigating your way past the mansion’s many guards. One might think such a multiplayer mission would benefit from strength in numbers, but a team of four also means four times as many opportunities to get spotted.

If anything else needs to convince you that Ubisoft is seeking a fresh start with Unity, look no further than the changes made to the post-assassination “white room” scene. This has always been a Metal Gear Solid-inspired last gasp diatribe by the mortally wounded target. In keeping with Unity’s detective narrative, we’re spared the drawn out monologues and we instead witness a series of rapid fire expository flashbacks. These are key events that hold clues to help Arno and his band of assassins plan their next move.

Even when many assassinations throughout the series are done in the name of vengeance, the majority of targeted kills are still “nothing personal, strictly business” affairs. Of the few times I’ve dealt death in Unity, it’s easy to notice that many of these kills are more pragmatically motivated than your usual Assassin’s Creed deaths. This doesn’t get in the way of the dramatic presentation of these assassinations. Many targets are all the more protected thanks to the improved crowd density, prompting you to make your lethal entrances all the more theatrical. It wouldn’t be an Assassin’s Creed without some flair, and this new installment will give you many opportunities to dealing death from above with some spectacle.