Above: A distress signal from a Weyland Yutani Corporation ship? I’m sure there is absolutely nothing strange and terrifying going on and we’re not heading to our deaths. Right, guys?

A Colonial Marine transport ship is making a return trip back to Earth when it receives a distress signal from the freighter known as Thanatos. Our heros are woken out of hypersleep and ordered to dock the ship. Surprise! The place is overrun with xenomorphs.

From a top-down view, players investigate the Thanatos and attempt to rescue survivors, while avoiding becoming Alien hosts. We’re given a handful of Colonial Marines to manage, all with their own speed and stamina stats.

Soldiers also have two arms that are equipable with any combination of objects. Allowing our marines to either dual gun it for more firepower, or use a combination of firearm and motion tracker to play it a bit more safe.

Another cool detail is that if a soldier’s health runs out, they are considered captured. When the next marine in the group is leaps into the fray, you have 200 seconds to locate their companion and have them rejoin the squad before their Alien host bursts.

I was surprised by how much creative thought was put into this, and I really like the concept. A “but,” however, lurks in the background.

The problem is that it is too ambitious for the platform it runs on. The limitations of the GameBoy Color drag down the experience with awkward hit-boxes and dumb artificial intelligence. It’s a design that desperately needed to wait out for the release of the GameBoy Advance.

Above: Someone designed a RTS for a console controller? KILL IT!

Aliens versus Predator: Extinction is a wonderful idea executed in a horrific way. An Aliens vs. Predator-themed real-time strategy game (great!), designed for the PlayStation 2 and Xbox controllers (ugh, what?!?). Someone out there, please…revisit this idea. Just make sure to design it for a platform that is much more RTS friendly (mouse/keyboard or touchscreens).

During the run-up to Aliens: Colonial Marines, beautiful images of footage peppered industry press goons before release. Demos of atmospheric dynamic lighting and incredibly detailed environments made everyone hyped as hell for Sega’s next video game bug hunt.

And upon release, Colonial Marines blew everyone’s minds … for all of the wrong reasons.

Aliens: Colonial Marines has become the modern example of when we hype a game for its eye candy, and upon release, it delivers a real-time visual experience that is short of the promises. Critics and fans pounced on the game something fierce for not meeting expectations, turning this release into a huge PR disaster for Sega.

Two years later, the drama surrounding Aliens: Colonial Marines’ legacy as a marketing blunder is still ongoing. Fans filed a class-action lawsuit against Sega and Gearbox for false advertising. In turn, Sega is suing Gearbox in order to get the studio to pay $750,000 of the former $2 million false-advertisement settlement. Sega claims that the developer was at least partially responsible for the  marketing debacle, so it should pony up for some of the damages.

If whoever was responsible didn’t promise the moon, Aliens: Colonial Marines could’ve been an average release that would’ve been lost in the used bins, perhaps obtaining a cult following several years later. Instead, it has become a cautionary lesson that should appear in every “Game Industry PR/Marketing 101” syllabus. 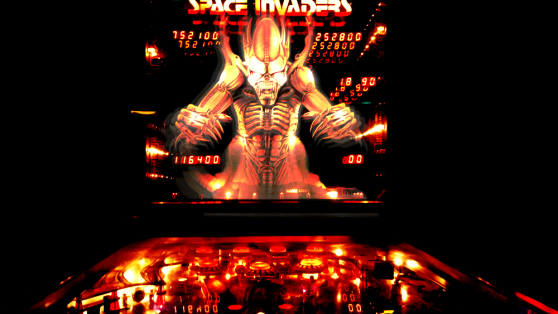 Above: Alien was a type of invader from space, right? Look, I’m not changing it.

The pinball industry in the ’80s was a highly competitive business. Not only were several big manufacturers trying to cut each other out of the market, but they were also competing against a new video game craze that was beginning to eat into their real estate in the arcades.

Bally tried to take advantage of video game’s becoming a significant part of popular culture by designing a table around Taito’s hottest title: Space Invaders. Unfortunately it looks like someone at Bally wanted to produce an Alien pinball machine instead.

Paul Faris’ (Centaur, Paragon, Xenon) artwork on the finished pin absolutely screams H.R. Geiger and not so much pixelated invaders from outer space. There’s no denying what the creature on the backglass is supposed to be, even with the small differences such as adding eyes to the monster. 20th Century Fox noticed and did what every corporation does when it gets pissed off: it sued the crap out of Bally.

Bally was forced to stop production on Space Invaders, but by then the damage was done. 11,000 units had made it off the assembly line and into the streets by the time the cease and desist came down.

Above: In space, no one can hear you tilt.

Fast-forward the pinball industry into the 1990s, when manufacturers had a serious hard-on for attaching movie licenses to their games. Williams pinball designer Barry Oursler (Dr. Who, PinBot, Who Dunnit?) and artist Mark Sprenger (High Speed, The Getaway: High Speed II, Diner) were assigned to design a game around the upcoming Alien sequel: Alien 3.

Production for the film was still early and had not yet become the complete clusterfuck it would become infamous for in Hollywood lore. The version of the script Oursler and Sprenger were designing around was not about a bald Sigourney Weaver wandering a prison colony, but a gigantic manmade wooden planet occupied by religious monks.

Oursler and Sprenger were far along into designing the game when word came from 20th Century Fox that film production would be delayed by an entire year. Williams didn’t want to waste a perfectly good game over a delayed movie license, so 20th Century Fox offered them Bram Stoker’s Dracula instead.

Bram Stoker’s Dracula would go on to become a cult hit among hardcore pinball fans. According to Oursler, very little was altered to make the original Alien 3 game design fit the new theme. So if you happen to see one on location in a bar or bowling alley, give it a try. Just try to imagine that Winona Ryder is a bald Ripley and Gary Oldman is an Alien. 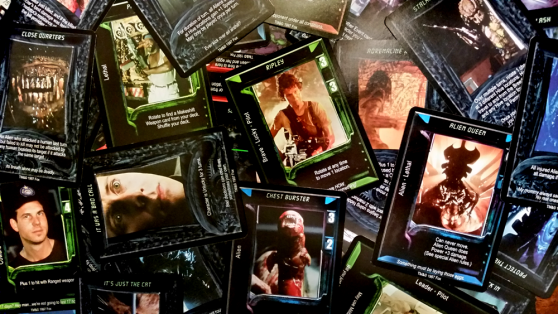 Above: Gotta hatch em all

The mid-’90s was a time where everyone in the pen-and-paper world was desperate to get a piece of Magic: The Gathering’s success. Publishers urged designers to chug out clones of the collectible-card game formula, which could be married to recognizable pop culture licenses.

This caused a saturation of trading card games with various themes, with Aliens vs. Predator: The Collectible Card Game being one example.

Its design is structured like a hybrid card-board game, where opponents play as one of the three species and build out the environment from their headquarters with location cards. When these hallways and corridors eventually connect, the action starts. Aliens want to capture other creatures and breed. Predators want to kill everything that moves and collect their hunting trophies. Marines just don’t want to die horribly. A combination of dice rolls and card abilities regulates combat.

Aliens vs. Predator’s banishment into obscurity comes from a few issues. For one, it adopted a design that relied on creating specialized decks that revolved around one species (one-third of the game), which is counter to the adaptability of the collectible card game formula. If you buy a booster pack and only have one species-based deck, you risk two-thirds of those new cards being unplayable.

The game is also absurdly unbalanced in its starter form. Predators are armored dump trucks compared to the Alien and Marine factions. Cards that would allow the other two species to play around that handicap are considered rare.

Finally, even if you have all of the cards, that doesn’t mean anyone is playing the thing. With so many products competing, if a multiplayer game didn’t catch fire and crack the top 10 in popularity, it won’t have the player base to flourish.

Aliens vs. Predator is a victim of being the wrong game at the wrong time. As a standalone product with expansions, such as Dominion and Resident Evil: The Deck Building Game, the concept has promise. Instead, it’s an obscure oddity of the 90’s.

My digging into the Alien franchise doesn’t stop here. Today, I dragged out some of the weird, cool, and downright horrible entries in the Alien games history. Tomorrow, I pull out the games I feel any fan should play