But analysts say that, whatever blip comes from short-term trading, HP’s move to break itself up comes from a failed market strategy. HP said it would divide itself into HP Inc., consisting of the PC and printer businesses, and Hewlett-Packard Enterprise, which has the enterprise and services divisions. The company is also laying off an additional 5,000 employees, bringing total layoffs to 55,000. But Wall Street often loves bad news, and in this case, analysts believe that the stock price bump that comes from the announcement may be short lived. 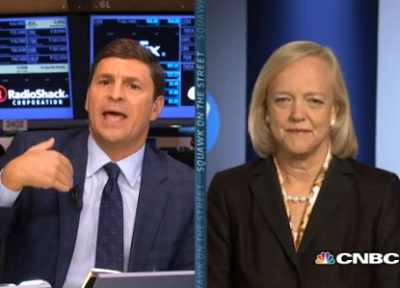 Above: Meg Whitman of HP on CNBC

McNamee said HP is two or three years behind every trend, and he said IBM made the right move years ago when it spun out its PC and server business as Lenovo.

“The only thing I’m certain about on this deal is that the executive compensation will be absolutely terrific,” McNamee said.

McNamee also said, “In fairness, i think HP has been horribly managed for 20 years. Meg Whitman didn’t inherit a great situation. But I don’t think there is any evidence she has gotten control over it….The long-term outlook for both sides’ business is terrible.”

Oddly, while HP is breaking itself up, rival Lenovo is bulking back up. In a statement, Lenovo said that it has been continuing share gains in the $200 billion PC market.

“We have outgrown the market and our competitors for 20 straight quarters,” Lenovo said in a statement. “We are confident this trend will continue, as we are focused and will continue to leverage the consolidation of this industry to grow; as we are innovative and the market can expect we will launch more and more exciting PC, mobile, enterprise and ecosystem products in the near future and in the long term; and as we are consistent and clear with our strategy, which after we close both the IBM System X and Motorola deals, will give us three growth engines — PC, Mobile and Enterprise.”

Roger Kay, an analyst at Endpoint Technologies, said the announcement to separate the PC-printer business from the enterprise business brought “groans of recognition.”

“HP’s current CEO, Meg Whitman, came to power on the heels of a debacle set in motion in 2011 by her predecessor, Léo Apotheker, when he let drop that he was thinking about selling off the PC division,” Kay wrote. “At the time, Whitman was against the move. But evidently times have changed.”

He added, “The ostensible reasons for dividing the company are twofold: smoothing operations and ‘unlocking value.’ It’s true, HP is a large, difficult-to-wield company, but the philosophy of ‘better together’ — espoused by Carly Fiorina, HP’s CEO in 2001 when the company picked up the former Compaq to form what became the industry’s largest PC company — has held until now. One of the key reasons for ‘better together’ was component costs, which decline with volume. By spreading purchasing across both PCs and servers, costs for the most expensive parts — displays, processors, memories, and disk drives — can be kept to a minimum. HP will lose these synergies in a spinout.”

Above: HP OfficeJet 8040 with Neat

Kay added, “The idea of unlocking value is a Wall Street construct that has nothing to do with operations. It’s all about stock price. To me, unlocking value is mostly fiction. If one division is perceived as having better prospects, by definition the other has worse prospects. If one believes in rational valuation, then investors have already made these assessments, and if the two are separated, the stock price of one should go up and the other, down. In theory, total value should be the same, since nothing operational has changed.”

He concluded, “Currently, HP works with overlapping distribution in many locations. Where customers now have a single HP rep calling on them, in the future they’ll have two. If for some reason the sleight-of-hand valuation trick actually works, even temporarily, the reduced operational effectiveness is likely to come back to haunt the company over time. To increase shareholder value, perhaps HP should spend more energy on improving operations than fiddling with ownership structure. Presented with the Shakespearian dilemma of whether to spin off or not to spin off, I find that metaphors related to pigs and lipstick come to mind.”

Joseph Pastore, professor emeritus at Pace University’s Lubin School of Business in New York and an expert on corporate strategy, said, “HP’s move to split into two businesses is not novel. Motorola did it circa 2011. The strategy is a response to firms that find themselves in rapidly changing businesses where part of their business is founded upon their legacy and historical repertoire and another part is cast upon an emerging business or direction for the firm.”

He added, “The challenge for diverse firms with a combined legacy and growth business portfolio is that, while the firm’s historic business may be a low-risk ‘cash cow,’ modest profitability in a legacy market constrains overall corporate growth and capital appreciation. To the extent a firm is succeeding in emerging markets, it is often seen as prudent to either divest the legacy market — as IBM did when it sold its PC business to Lenovo — or divide the firm into two businesses, legacy and emerging. Doing so not only allows the emerging portfolio to prosper in equity markets unconstrained by the slow-growth legacy business, it also serves to mitigate whatever organizational and cultural conflict may exist between the firm’s past and future businesses.”

And Pastore said, “The key challenge for firms rooted in traditional and emerging markets is whether stockholder pressure to separate the emerging market portfolio into a separately incorporated new business will undermine the overall corporate and leadership strength of the firm. The key to avoiding such consequence will be found, of course, in the quality of leadership for both units and the ability to engage a de facto, joint venture relationship.”

Patrick Moorhead, analyst at Moor Insights & Strategy, said, “Overall, this should be a positive for HP. They have two businesses with differing product life cycles, margin structures, distribution channels and sales cycles. After three years of looking for synergy outside of the supply chain, it’s apparent HP CEO Meg Whitman see benefits of the split that outweigh losing a supply chain advantage. I believe the two companies can be more nimble and be able to deliver better products and services on a faster pace. HP Inc. will need to accelerate into 3D printing, smart home, and premium PCs, maybe even a foray back into smartphones. The enterprise organization has a strong infrastructure offering, but will need to drive even more quickly into hybrid clouds, appliances, and address the giant sucking sound of public clouds.”

Speaking to David Faber at CNBC, Whitman, who will be CEO of Hewlett-Packard Enterprise, said that the split-up is only possible “because the turnaround has succeeded.”

She said, “Think about what we have accomplished over the last three years. A rebuilt balance sheet, an innovation pipeline that is significantly improved over three years ago. I would argue best in class in the industry now. An inspired workforce, a new HP. But we’re in the position to take advantage of what’s going on in the marketplace and position these two companies for growth. They go after quite different market segments and we now have the opportunity to align rewards and results, to respond to customer needs faster with these two big companies.”

Asked why she didn’t split the company when she took over, Whitman said, “We had a lot of work to do to get HP in fighting shape. There was a tremendous amount of repair work and gathering ourselves to be able to compete in the new world order. And now, the time is right as we think about what is the next phase of this turnaround. Remember, we’re in year three of a five-year turnaround.”

Faber pointed out that, just six weeks ago, Whitman had said that an end-to-end strategy was best for HP. She responded, “Listen, we think this is the best alternative for our customers and our shareholders. The market has changed dramatically in terms of speed, and we’re in a position now where we can pursue the turnaround of Hewlett-Packard.