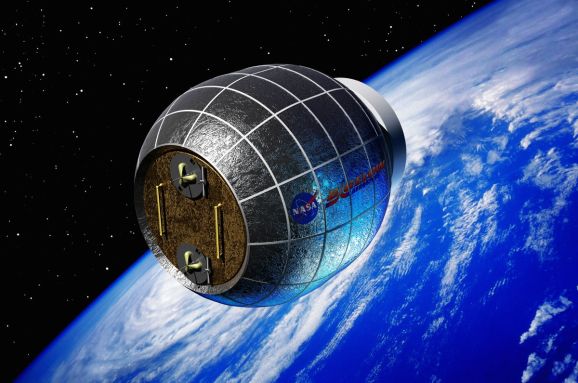 Artist's concept of the Bigelow Expandable Activity Module (BEAM), an inflatable room being added to the ISS in 2015.

The International Space Station will continue its home improvement project next year, this time by adding a large, inflatable workroom from Bigelow Aerospace.

The Bigelow Expandable Activity Module, or BEAM, will head to low-Earth orbit (LEO) in 2015 aboard the Dragon, a rocket built and operated by the privately run, Elon Musk-founded company SpaceX.

NASA is paying Bigelow $17.5 million for its extra room.

The addition of a relatively inexpensive room, built by a private company and put into orbit by a private company, marks a fairly significant transition for manned spaceflight: From an activity led primarily by government agencies to one dominated by commercial interests.

Gold added that this mirrors an earlier transition with unmanned satellites. In the 1950s and 1960s, nearly every artificial satellite orbiting the Earth was put there by a government entity. Now, the publicly funded satellites are the exception, while most orbiters are put there by companies like DirecTV, Sirius/XM, Hughes, Loral Skynet, and many others.

What’s more, you probably use those companies’ satellites multiple times a day, simply because their services are woven into your smartphone, your cable TV service, your GPS systems, and more.

“This will happen when it comes to crew operations,” Gold said.

In September, NASA awarded Boeing and SpaceX a $6.8 billion contract for transporting people into orbit. It’s on the strength of business like that that SpaceX is reportedly worth $10 billion.

For its part, Las Vegas-based Bigelow Aerospace was founded in 1999 to build inflatable orbiting rooms — which the company insists are not “space hotels.” It anticipates that its rooms will be used for microgravity research, not tourism.

However, the ISS itself is a popular tourist destination — for those with tens of millions of dollars and the willingness to go through rigorous space camp training in Russia. So perhaps Bigelow’s inflatable rooms will wind up hosting paying guests eventually.

And Bigelow’s own website has a prominent offer of the price tag for visiting its space rooms: from $26.25 million per person. Book your flights now!