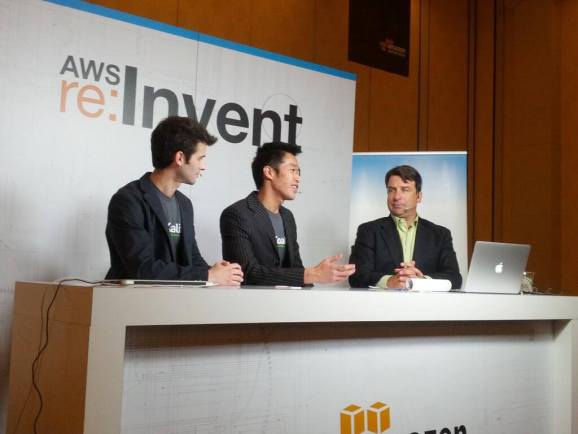 Jordan Potter and Jon Chu of Koality speak with John Furrier at the 2013 Amazon Web Services Re:Invent conference in Las Vegas in November 2013.

Docker, one of the hottest cloud startups around thanks to its container technology for packaging up and moving code, said today that it has bought continuous-integration (CI) startup Koality, in a quest to help big companies develop and ship code faster.

Koality develops software that simplifies the typically tedious process of testing application code as companies prepare to deploy it. Docker executives believe the technology and the team’s know-how could flesh out Docker’s campaign to help companies develop, control, and manage the use of Docker-style applications inside their own data centers.

“Docker is not acquiring Koality to bring a CI product to market,” David Messina, Docker’s vice president of enterprise marketing, said in an interview with VentureBeat. If anything, he said, Koality gives Docker greater institutional familiarity with the security, compliance, and governance needs of enterprises in the application development process. This could come in handy to bolster the Docker Hub Enterprise tool for handling companies’ Docker-based applications and application components.

And that’s crucial to the direction Docker is going. Developers at startups and even some big companies have come around to understanding the benefits of packaging up their code into containers instead of in virtual machines, as they can be more lightweight and consume fewer computational resources.

Open-source projects based on Docker’s innovation have popped up all over the place, as have startups with services built on top of Docker. And even Amazon, Google, IBM, Microsoft, Red Hat, and VMware have come around to Docker’s advantages. All the while, Docker has been building up a publicly available online registry for tooling inside Docker containers. But Docker is thinking bigger, with the goal of managing Docker deployments inside big companies’ IT infrastructure. That’s what the Docker Hub Enterprise service is all about.

That’s where Koality will fit in. It will help companies get Docker-based applications solid and ready to run as soon as possible. Clearly, rapid but secure and compliant testing and deployment has proven a top priority for the big businesses Docker wants to work with.

Messina declined to disclose the number of companies Koality worked with.