I can’t speak for anyone else on the GamesBeat staff, but I’ve definitely bought a ticket on Sega’s hypetrain for Alien: Isolation.

Like riding any form of high-speed transportation, however, in the back of my mind lies the fear that this ride will end in a public display of disastrous calamity. That the locomotive, fueled with a potent mix of my naivety and high expectations will smash into a brick wall of disappointment, leaving a mushroom cloud of first world outrage that will be seen for miles around the crash site.

For Part 1 on the worst, the canceled, and the weirdly cool games in the Alien series, click here.

What is keeping me from tucking-and-rolling out of the nearest emergency exit on the Alien: Isolation excitement express? Despite that I just wrapped up an article highlighting canceled, off, and horrible titles that used the Alien license, the franchise has not been completely plagued by bad games.

Today, I’m going to discuss the great Alien games that I stumbled across. If you’re a fan of 20th Century Fox’s space monster, everything in this list is worth at least a few minutes of your time. At worst, these games at least make me feel more secure in my anticipation for Alien: Isolation. 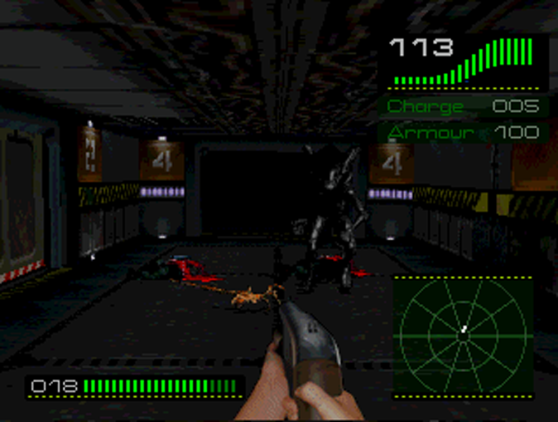 Above: Hold on! Don’t tell me. You guys played Alien Trilogy back in the day as well, right? How did I know?

You ever have a piece of pop media that haunts your conversations? Some piece of B-level entertainment that seems to randomly leap into discussions like a ghost that follows you from one group of people to another group of completely unrelated people. Except the screeching sound of screams is replaced by a lot of “Oh, yeah! Oh, my GAWD! That was awesome!”

Alien Trilogy is my conversational specter. And I now understand why it spooks my discussions.

Alien Trilogy was released during the tail end of the 2.5D era of first-person shooters. This means it has a lot of switch–pulling and key-hunting clichés to deal with. To be fair, it isn’t as if those objectives have radically changed in today’s single-player first person shooters. It’s just hidden by a lot more flair and hand-holding when you get lost.

This version of LV-426’s terraforming colony also includes the ’90’s era monster closets, storing vicious cardboard cut-outs of xenomorphs, facehuggers, and androids run amok. Some people may not have the patience for these antiquated design tropes, of which there are 30 levels of them to plow through (10 for each Alien movie of the time), but under the right frame of mind it all comes off charming. It’s like an extremely polished Aliens themed modification of Doom (technically, if it isn’t, I’ll eat my imaginary hat). This brings everything full circle when I consider the movie Aliens was a major influence for id Software. 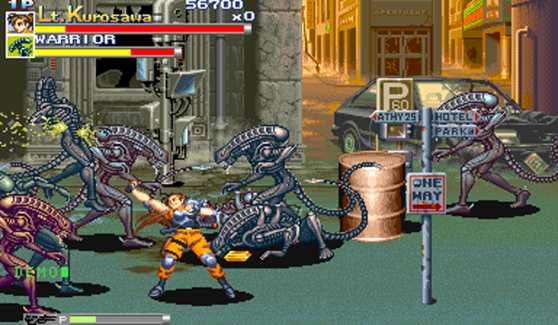 Above: Aliens vs. Final Fight

Someone with a lot of vision saw a franchise about gun-blazing space marines in a setting of claustrophobic psychological horror and thought, “What this theme needs is an Alien invasion of Los Angeles … and more fists in the face!”

Who that guy is, we’ll likely never know. What I do know is that someone at Capcom listened to that magnificent bastard and put their best squad of beat-’em-up developers to work. What emerged is one of the coolest entries in the genre.

The battle system in particular contains an uncanny level of depth. The combo system is vast for a beat-’em-up of its time, providing a lot of ground and air mix-ups that you can perform on multiple enemies at once. You can also perform some co-operative combos if your partner is equally skilled at kicking xenomorphs in the back of the head.

There’s also a clever meter management mechanic and an impressive move list for each of the four characters. This includes fighting game-like special moves, complete with charge execution.

The presentation in Alien vs. Predator benefits greatly from Capcom’s slick-as-hell CPS-2 era art direction. One of the several reasons Capcom gained popularity in the ’90s arcade scene was its carefully crafted 2D art department, which was arguably the strongest in the industry at the time. Famous artists such as Akiman, Bengus, and Ikeno (just to name a very few) all put in their time at the company during this time. You can definitely see the incredibly talent that was working there, as it is reflected in the incredible sprite work and inspiration concept art for Alien vs. Predator. 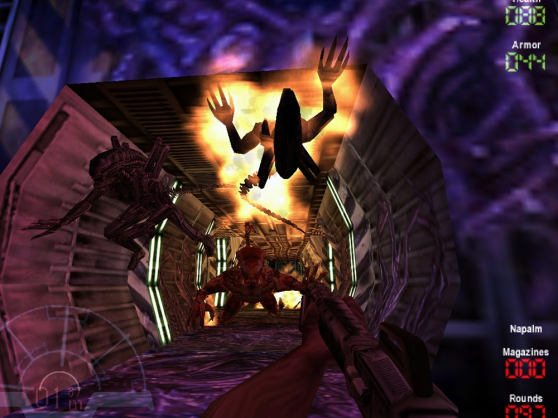 Like Alien Trilogy, playing Rebellion’s 1999 version of Aliens vs. Predator is like cracking the seal on a time capsule of first-person shooter-design tropes. In this case, we are definitely catching whiffs of the arena-shooter craze of the turn of the century.

You see, the late ’90s were a time when Quake III Arena and Unreal Tournament dominated shooters. They were games designed to cater around extremely fast multiplayer modes that pushed a player’s physical reaction skills. Because of this, the player pool was conditioned to having their twitch reactions tested by opponents that required millisecond accurate movement, aiming, and shooting to defeat.

This makes the action in this version of Aliens vs. Predator slippery compared to modern titles. Xenomorph adversaries in the marine campaign are especially quick and frightening. A blip on the outskirts of the motion tracker means you have a split second, at best, to clock your target and start firing before it is right on top of you.

If you have the misfortune of running into two or three Aliens at once, the display is going to be a spinning blur of polygons while you try to evade, leap, and eventually bear down on an Alien target before it massacres you.

Adding to the stress level is the well-done lighting and effects system. The lighting techniques are simple by today’s standards, but they remain effective, mimicking the hazy glow of the hazard lights and random bursts of steam from the movies. It provides the right visual flavor to an intense situation.

As a bonus, the multiplayer mode is legendary in some corners of the gaming community. In fact, it was considered the game’s primary mode of play during its prime. It’s too bad that finding enough people interested in playing a 15-year-old online game is nearly impossible.

Above: I’m telling you…there’s movement everywhere, man. They’re all around us!

Tossing the Aliens franchise into a Metroid-structured 2D game is one of those ideas that is so obvious that it should’ve happened in 1989, not 2009. Yet it took the industry 20 agonizing years to finally put the two together, and we can thank WayForward and Gearbox Software for getting off their asses and making it happen.

In Aliens: Infestation, players manage a squad of four Colonial Marines investigating the decimated compound on LV-426. After their brief mission at the colony is complete, they return to the USS Sulaco (the gun-shaped ship that carried the characters in Aliens) to find that xenomorphs have overrun the place.

While exterminating the pest problem onboard, you find additional marines that represent a wide-range of cultural stereotypes scattered throughout the ship. You can recruit each newly found soldier to take the place of one of your original group of four (or replace any that have been killed). Every character has their own backstory and motivation for being on the USS Sulaco and wanting to see the Alien threat destroyed. This teases my OCD tendencies, which make me want to replay it repeatedly just so I can beat the game with every character.

The visuals are also top notch. The details in the environmental set pieces create a charming dollhouse sense of 2D claustrophobia.

I only have two constructive critiques to throw out there. The marine and squad mechanic could have been amazing if the different soldiers had their own gameplay strengths and weaknesses. The design structure and visual cues give the impression early on that this is the case, but in the end it is an elaborate way of handling extra lives.

The other issue is that killing Aliens yields no benefits. This doesn’t become a big deal until you backtrack. Another Metroid-inspired game, Castlevania: Symphony of the Night, rewarded players with a leveling system, experience points, and items. If someone is pitching Sega on doing a sequel to this otherwise awesome rat-in-a-maze title (and if not, why not?), hopefully they keep these little tweaks in mind. 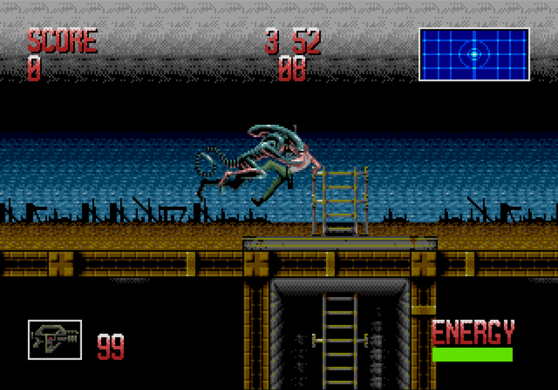 This is one of those games that I see people bashing a lot on the Internet. In fact, I expect some “Alien 3? Is this prick serious?!?” comments for adding it to the list.

Well, guess what, Internet? I am serious. And you’re wrong on this one. Some of you have been going at this underrated gem of the Sega Genesis library with the wrong perspective.

Part of the problem may be that any products tied to the Alien 3 film carry with it the baggage of, well, being associated with Alien 3. I won’t analyze the issue much further than this. This is where the brunt of the dislike for this game lies. But here’s the thing about Alien 3 for the Sega Genesis, it’s a side-scrolling homage to another respected Sega arcade classic: Alien Syndrome.

The premise is that Ripley spawns on the Fiorina “Fury” 161 prison planet from the movie, equipped with a bunch of weapons not from the movie. Xeno-impregnated prisoners lurk throughout the prison complex, and it is Ripley’s task to search for and rescue these poor schmucks.

Obviously, Aliens creep around the facility ready to ambush her. Adding to Ripley’s problems is a tight time limit to each level, which requires that she both find all of the prisoners and reach the escape route before the clock runs out. If you enjoy the Alien Syndrome formula, you have no excuse to not give this cartridge a try.

I’m even more impressed by it when I consider that this was a 90’s tie-in for a large budget summer movie. This was an era where a movie’s marketing budget campaign likely put “video game” in the same tier of importance as the Slurpee cup promotion. This could’ve easily been shovelware, but we get something much better. 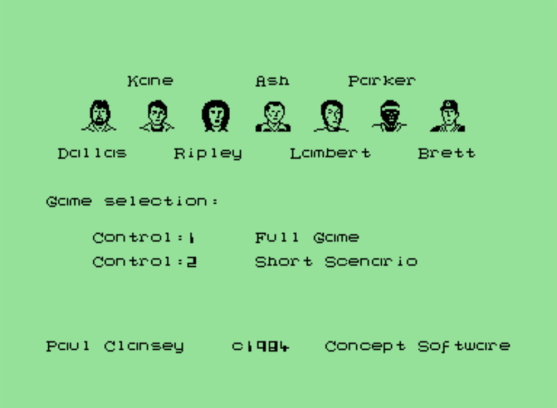 Above: Everyone line up for your Voight-Kampff test

James Cameron’s vision of the Alien universe is well represented in video games. Space marines gunning down waves of ferocious monsters is a natural fit for the medium. But what about something a bit more psychological? A game playing more toward Ridley Scott’s “5 Little Indians” version? After climbing tall, leaning towers of Alien game cartridges, discs, and jewel cases, I finally found something that fit: Alien for the Commodore 64.

In Concept Software’s take on Alien, you take the role of a commander giving orders to the crew of the Nostromo, who are dealing with a xenomorph infestation. Right away, one of the characters are killed off at random in order to play host to the Alien parasite. Throwing another screwball at the player, the game also randomly assigns droid status to one of the crew members. The droid will subtly try to sabotage your progress without giving itself away.

Getting the human crew members to successfully complete tasks, or even listen to your requests, depend on their personalities and mood swings. Putting someone into a stressful situation that they can’t handle alone and they may be too frightened to do anything. Put too many people into a vent to hunt the Alien and everyone begins suffering from claustrophobia. It’s impressive that these little design details were being explored in 1984.

The only hiccup with Alien for the Commodore 64 is that modern gamers are going to find the UI design cumbersome. Interaction boils down to slow early 80’s menu navigation with no hot key shortcuts, which can be frustrating when a high stress situation occurs.