Above: “For the last time, we don’t have your colonists or your marines. Stop bothering us! We’re trying to have dinner!”

The Western coin-op industry may be a functional corpse compared to its former self, but companies like GlobalVR are still giving arcade operators new equipment to put on location. In 2006, one of those chunks of quarter sucking amusements is a simple, yet enjoyable, light gun game, Aliens: Extermination.

Extermination takes place in — and stop me if you’ve been here before — the colony on LV-426. Players are a part of a Colonial Marine deployment that investigates the other Colonial Marine deployment that has gone missing, which happened to be investigating why the colonists had gone missing. It’s like investigating why planes go missing in the Bermuda Triangle by sending in more planes.

Yet while playing Extermination, I understand why these marines keep going missing. The xenomorphs are fucking tanks.

It takes a distressing amount of ammo to take down an Alien in this game, and you never face just one at a time. Making things a lot more difficult are the cliché bag of dirty design tricks peppered throughout the experience. Stuff like incredibly quick sneak attacks just off-screen that are difficult to react to and making the odds against the player at certain points overwhelming just enough so an attack will squeeze in last second. These techniques are understandable given that the game is there to steal your pocket change, but I’m dying in the first few minutes. So either I suck at light gun games or this machine is difficult. 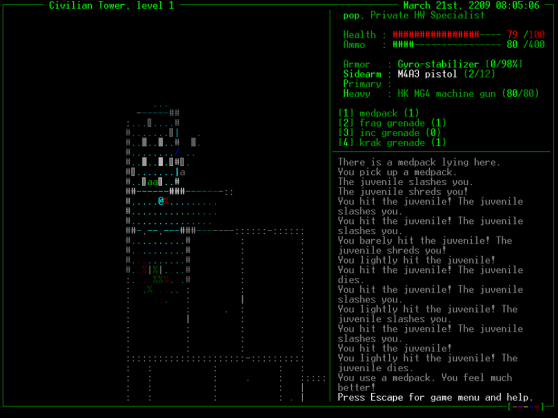 Above: I realize this looks a little cryptic, but trust me; I’m in deep shit!

If the screenshot above has you confused as hell, let me introduce you to the cool little genre known as roguelikes. Such games have several characteristics, such as being top-down, turn-based dungeon-crawlers that are often tough. But the most traditional aspect of roguelikes are the graphics. Well, no graphics in the traditional sense of sprites and polygons. Everything in the game world is built out of ASCII text.

This may sound lame at first, but with a setting like Aliens, the ASCII presentation really comes alive. Your imagination generates LV-426’s dark, acid-drenched corridors and chaos-torn rooms for your mind’s eye. Green and blue As become terrifying creatures that stalk the metallic halls of the compound.

In an age that bombards us with visual information every waking moment, it’s refreshing to shock the brain into drawing pictures internally. You can find this roguelike for free on the developer’s website. 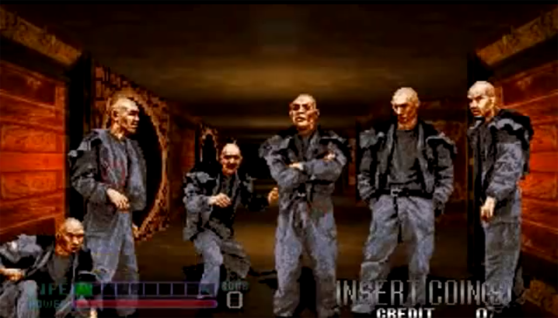 Above: Running through this maze full of Aliens sounds like a good idea, guys! Tell you what, how about I hold onto the only gun? I’m sure it would just slow you guys down.

I’m convinced that the title of this game is self-referencing irony. Think about it for a second. It’s the early ’90s. Some poor designer is approached by a man in a suit, who tells the developer to make a light gun game using the Alien 3 license … a movie about pacifist space convicts on a weaponless prison planet.

And it is fun.

Alien 3: Screw it! … I mean, Alien 3: The Gun, is the richer experience between the two light gun games featured in this list. The the pacing is quicker, and buckets of Aliens pour on the screen to shoot down, splattering like acid-filled balloons.

All of the cheap tricks I complain about with Aliens: Extermination are here, but the intensity of the shooting and the satisfaction of downing larger waves of targets make up for it.

What finally pushed me to place Alien 3: The Gun on the list, however, is the underground chase level. This section mimics the scene in the film where the prisoners must run through corridors to bait-and-trap the creature. The difference here is that you’re running through the maze armed to the teeth and all the convicts are high-tailing it away from roaming stampedes of Aliens while you lay down cover fire. It’s an example of the “don’t shoot the bystander” cliché in light gun games, but it’s executed in a clever way. 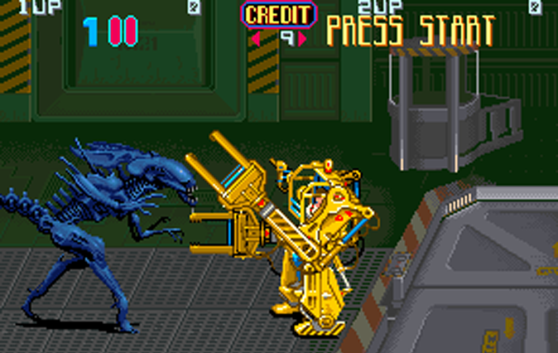 Above: Get away from her, you bitch!

Several years after creating the 8-bit homage to the James Cameron movie with Contra, Konami finally snagged an official license for the Aliens franchise in the late ’80s. In the summer of 1990, it released an arcade-platform shooter titled, well, Aliens.

A 16-bit Ripley is running and gunning her way through LV-426. Out of all of the games on the list, this is the one with the widest range of Alien types. Bat Aliens. Gargoyle Aliens. Aliens that have turned humans into zombies. It’s got a lot of creative license with the here.

Konami’s Aliens is a solid, if not extremely safe, arcade title. It’s competent and entertaining for a quarter sucker, but it lacks the creative push in gameplay found in other entries on this list. I was hoping for something more than adequate from the company that released Teenage Mutant Ninja Turtles a year earlier.

Konami is going through the motions here, it just so happens that their teams were talented enough to push out something enjoyable while being so run-of-the-mill about it. 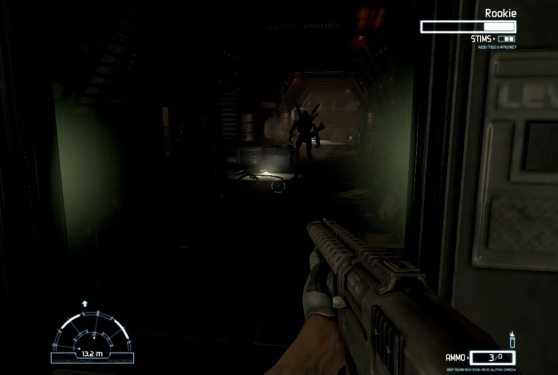 Two years before Aliens: Colonial Marines turned everyone off of Sega’s handling of the franchise, the publisher put out a fantastic big-budget release that no one seems to remember: Aliens vs. Predator.

Rebellion was on an eight-year long hiatus from developing a first-person shooter based off of the interspecies franchise that propelled the studio to greatness (although it had a slight blip of activity in 2007, where it worked on a low-tier PSP tie-in for the criminally abysmal Aliens vs. Predator: Requiem). The narrative bait attracting us into another round of interspecies hostility is a distress call from a sketchy undocumented planet somewhere in deep space. A Weyland Yutani Corp. research facility on the surface has gone apeshit. Depending on your genetic leaning, this can be taken one of three ways. If you’re an Alien, it’s like a gigantic free buffet just opened up. If you’re a Predator, it means you’re going on a fishing holiday. If you’re a human, you’re screwed.

If you find the 1999 version of the Aliens vs. Predator first-person shooter too old-fashioned (or its action too quick), this chapter’s slower, more modern-paced take may be a better fit. The marine campaign in particular is an enjoyably atmospheric set-piece experience, which concludes sooner than I wanted it to. That’s a good sign that I was having a fun time.

The Aliens campaign follows the sickening tumbler-dryer control scheme of the previous titles, where you’re snagging walls and ceilings while plotting out human assassinations like a sadist. Predators have a clearer defined gameplay identity here as well. They play less like a powered-up Colonial Marine and more like a hulky bystander of the Aliens and Human conflict. Stealth and picking the right time to pounce on humans, while bagging a bunch of Aliens, is a key mechanic to their gameplay.

All three campaigns are enjoyable, if too short.

I’m conflicted between Rebellion’s 1999 and 2010 releases. Like two children asking which one I love more, I can’t possibly choose. Just play both. 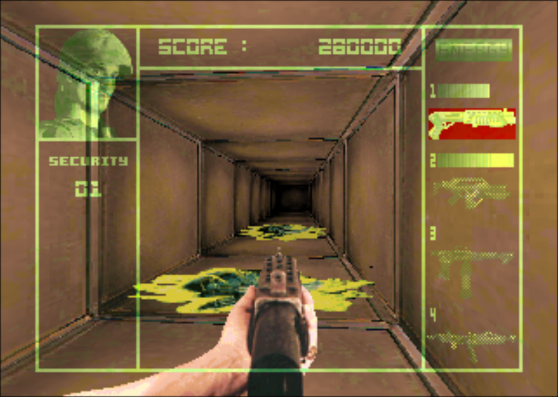 Above: Sigh … for fuck’s sake. I have to walk through here. That shit hurts to step in.

Rebellion’s three decade run with the Aliens vs. Predator franchise would take place on the most unfortunate platforms during the 16-bit console wars: the Atari Jaguar.

Atari’s console was crushed as a minor innocent bystander of the monstrous Nintendo vs. Sega rivalry. By association, Rebellion’s Aliens vs. Predator shares the Jaguar’s fate as an oddity of a game enthusiast’s collection. And if you don’t have a high tolerance for ’90s first-person shooters, you may think it deserves to be locked away in obscurity.

Out of all of the antiquated first-person shooters on this list, this version of Aliens vs. Predator has aged the worst. Even Alien Trilogy, which begs modern audiences to keep in mind what era it comes from, doesn’t have the awkward Atari Jaguar controller to deal with, the visually confusing level layout, and situations where you have no choice but to take damage (kill a xenomorph in a ventilation shaft to see what I mean).

What it has going for it is an incredibly creepy atmosphere, which sees the (lack of) audio doing all of the heavy lifting. I’ll also give it props for introducing a multifaceted design to FPSes by providing three different playable characters, all with different styles of gameplay. Hell, I’ll even admit it is one of the Atari Jaguar’s killer apps (next to Tempest 2000), but that may not be saying much.

It’s old-school clunky without the overwhelming charm required to come off endearing today. Like seeing your grandparents during a family reunion, give it respect … and then go hang out with the more enjoyable relatives. 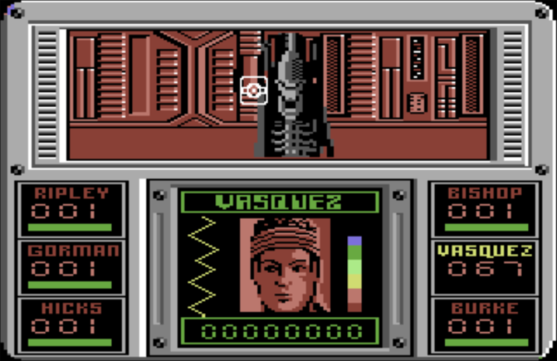 No, I’m not having a stroke. Yes, I know I already mentioned an Aliens game for the Commodore 64 in the previous article. James Cameron’s action blockbuster and the “computer for the masses, not the classes” were hot in the ’80s. And wherever you find something hot, someone’s always ready to invest in putting a couple different types of jugs of it on store shelves.

Set on LV-426, players control the squad of Colonial Marines that stormed the terraforming compound from the movie. The play design is an extremely early example of a strategic first-person shooter. Players manipulate a UI that resembles the monitor banks in the APC vehicle in the movie, which show each character’s helmet cam and vital statistics. Switching from one character to another changes the viewpoint of the main monitor, which in turn enables the player to fire that characters weapon and move them from room to room.

It may lack the audio/visual punch of Activision’s Aliens game (see previous article), but the gameplay is more tightly defined and is forward-thinking for its time. If you’re capable of putting yourself in the mindset of an ’80s gamer, you’ll appreciate giving this one a try.

If you don’t have the old-school hardware to run this, check out the free Windows OS friendly remake of Aliens called LV-426. The core of the Commodore 64 game is still there, just with updated graphics and sounds, the ability to build out your squad from a wider variety of characters, and a new map layout.