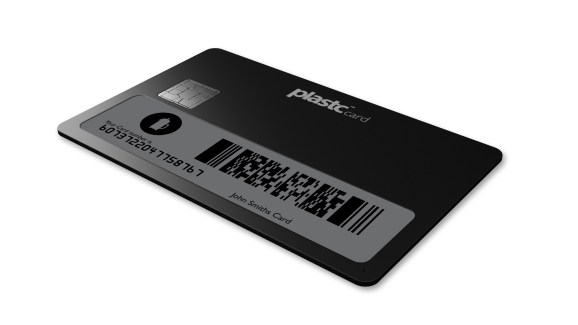 Not even a year after Coin’s launch, it has yet another competitor. Plastc, a digital wallet in a card, is announcing its arrival today — let the pre-orders begin.

Coin has already seen one new competitor, Stratos, which unveiled its product last week. Plastc, is a slightly trumped up version of the digital-wallet-as-physical-card that wants to provide consumers with a pathway from swipe cards to tap to pay solutions.

“There needed to be a Trojan horse to guide the way for consumers to make the transition from physical wallets to digital wallets” said Ryan Marquis, co-founder and COO of Plastc.

Plastc offers a lot of the same things Coin does. A mobile card reader to load up your cards into your digital wallet, a display screen on the card that let’s you choose which card you want to use for each transaction, and a proximity-based alert that notifies you when your card is far from your phone. But it tries to outdo Coin with the promise of more.

Plastc stores up to 20 cards on its device, where Coin only holds eight at a time. Where a Coin card battery will last up to 2 years before it needs to be replaced, Plastc’s battery only last 30 days but comes with a recharging mat. When Plastc’s cards ship next summer, they’ll carry both NFC cards and chip-and -pin technology.

The company also prides itself on its security. The mobile app requires both a four digit pin and a biometric facial scan before it gives users access. The card itself also requires a four digit pin. Plastc also has a remote wipe feature in case the card is lost.

But the card does display a credit card number like any old credit card, which is a weak point in security compared with other digital wallets. Also, as a swipe card with a magnetic stripe, it’s prone to any malware installed on a credit card point-of-sale terminal.

And compared with the security promises of digital wallets that neither require users to prominently display their account numbers on a physical object nor swipe a card at a terminal, Plastc’s offerings lack luster.

But this doesn’t deter Marquis. He sees the emergence of Apple Pay and like wallets as opening up the digital payments industry for all digital payment technologies. And he thinks it will take a while before consumers and merchants switch over to mobile-only payment methods. “You’re still going to make a digital wallet to make transactions at ATMs and gas pumps,” he said.

Maybe he’s right, but that feels like betting on the 8-track. It might have bridged reel-to-reel technology to the audio cassette, but it didn’t really have staying power on its own. With the advent of entirely digital wallets drawing nigh, it’s hard to get excited about an all-in-one card.