Today, one-tap messaging app Yo is stepping up its game with a new location-sharing feature.

Now you can set up the app so that it sends your current location when you “Yo” a friend. In addition to enabling location sharing between users, Yo will also allow developers to access this feature via its API.

“Alongside enabling users to relay where they are at the moment, the new feature – available on Yo’s latest iOS release – opens up a whole world of possibilities for both users and service-providers using the Yo API,” the company writes in a blog post. 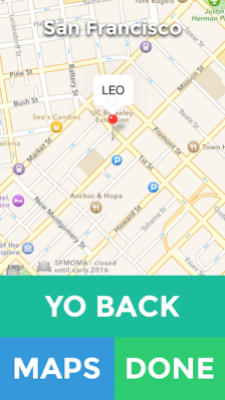 Yo introduced its first update in early August, expanding the app’s functionality into third-party services (for example, the ability to Yo a taxi cab). The addition of location sharing means Yo is feeling out other venues for its stupidly simple app.