By emphasizing the missing ingredient of time, a Palo Alto, Calif.-based startup is launching a solution today that it says can dramatically speed up business analysis of big data.

The new company, Interana, says its analytical engine can find and display key metrics in seconds, instead of the hours or days that other solutions require.

“It’s really fast,” CEO and cofounder Ann Johnson told VentureBeat. She said other solutions might take overnight to run such queries as determining “the time between when a user signs up and posts the first content.” Interana, she claimed, can “let you query that stuff on the fly.”

The data could include, say, clickstreams, call records, or transactions, which Interana stores as sequences of events. You conduct ad-hoc, single-pass queries through a visual interface, with large raw data sets processed at runtime. Users can drill down for more detail.

To accomplish a speed advantage, she said, “we make one important simplifying assumption” — emphasizing data as events, driven by the factor of time.

In comparison to analytical engines that create “a single state of data” and then process later for time factors, Johnson said, Interana has been “built from the ground up for event data.”

“The cool thing about event time,” she said, “is that all of your key business metrics are in time,” such as growth, retention, conversion, and engagement. The company’s solution assumes that “the questions [a business] will ask always have a time-order component.” 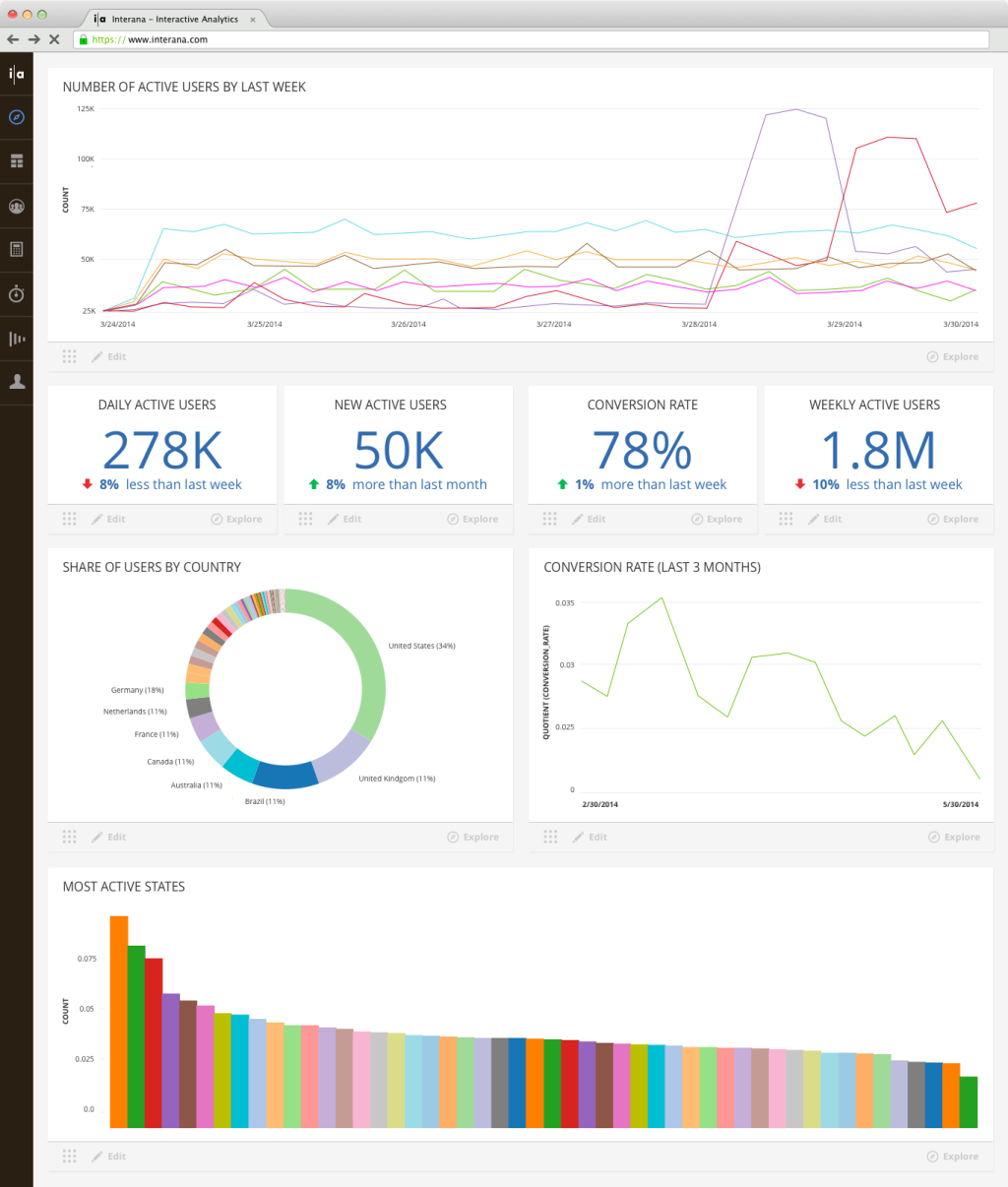 Above: A dashboard screen in Interana

The company’s emphasis now is mining for insights in current and historical data and not on the trendy area of predictive analytics. Key targets are companies “in the web space,” Johnson said, which are focused on traffic, growth, and conversion — all of which have essential time components.

Her husband and co-founder, chief technology officer Bobby Johnson, told us that “a very savvy company [might] generate event data and put it through a stack of tools” while his company’s new solution combines those tools.

Both Johnsons said they don’t know of another company that is also offering such a full stack solution.

Typically, Bobby tolds us, customers use “a combination of visual and storage solutions,” such as the big data open source framework Hadoop, or the analytics platform Vertica, with the data visualization tool Tableau.

“While these systems are sufficient at providing users with reports or dashboard on what key business metrics are,” he said, “they don’t provide a fast and easy way to understand how or why these metrics change over time. Interana solves this problem by providing a complete solution [for visually exploring] sequences of events over time to understand how customers behave and products are used, in seconds.”

The analytics solution is just now emerging from its beta period, during which about a dozen companies tested it.

“We can install anywhere,” Ann said, although it is primarily intended as onsite software. “People have a mountain of data,” she added, “[so] we’re going to the [mountain].”

Bobby led the infrastructure engineering team at Facebook from 2006 to 2012, during which time the social network adopted the big data open-source framework Hadoop and developed the data tools Hive and Cassandra. He said he personally coded the open source data tools Scribe and Haystack. The third co-founder, Lior Abraham, created the internal analytics tool Scuba while at Facebook.

Founded early last year, Interana has about 30 employees and has previously raised an investment total of $8.2 million.