Technical Illusions is getting quite serious about augmented reality. The company, founded by former Valve tech wizards Jeri Ellsworth and Rick Johnson, is making the CastAR augmented-reality glasses

The company showed off its latest early developer prototype at the SEA VR virtual reality event in Seattle. The prototype had come a long way since I visited the company back in February. Back then, the startup was housed inside a big home in Woodinville, Wash., in the forested suburbs of Seattle.

CastAR was born as a research project at game publisher and Steam game distributor Valve. But the company chose not to pursue augmented reality, and Technical Illusions spun out and then received huge validation for its efforts when it raised $1 million in funding on Kickstarter in November 2013.

Now the company has hired a new chief executive, David Henkel-Wallace, and chief financial officer Paul Denton. It has also moved its headquarters to the Silicon Valley town of Mountain View, Calif., the same place where Google (maker of the Google Glass augmented reality glasses) is based.

The CastAR glasses can project 3D holographic images in front of your eyes so that you can either feel like you’re seeing a virtual layer on top of the real world, or you can feel like you’re immersed inside a game world. It works with glasses and a reflective sheet-like material called “retro-reflective.” At the Seattle event, Technical Illusions showed off the prototype that it will be able to ship to early Kickstarter supporters this year. I played a demo on the CastAR, and it worked beautifully. In a demo inspired by the old Marble Madness game, I was able to move around a marble through a landscape by tilting my head. I found it very easy to control things in the virtual world, but I could also see everything happening around me the because the glasses don’t obstruct your view of the real world.

I caught up with Ellsworth for an update at SEA VR. Here’s an edited transcript of our interview. 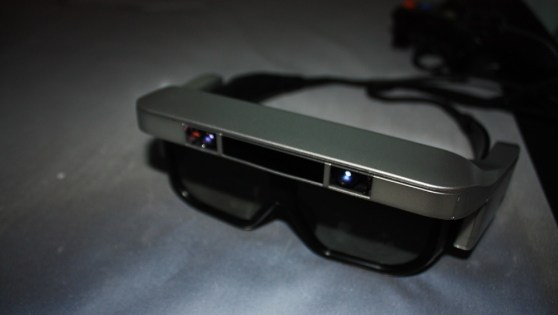 Above: The CastAR from Technical Illusions

GamesBeat: Is this the system you’re going to ship?

Jeri Ellsworth: These are what we’re calling the early developer units. A hundred or so go to the Kickstarter folks. A lot of developers want units, and some of them have already purchased them. We’re building a few hundred units at a time. Those are going out over the next month or two.

GamesBeat: This set is far different from what I saw several months ago. It was still pretty heavy and bulky. You’ve lightened it a lot.

Ellsworth: These glasses are about 140 grams. We’re shooting to get it down to 80 grams over the coming year, as we ship more. We want to cut it about in half. It’s an interesting story. We didn’t know the size of the camera or projector or circuit boards as we were trying to develop the plastics. So we made things bigger to be sure we could fit them in. It turns out that all the projectors and cameras ended up being much smaller, so it’ll be an easy task to shrink everything in the next revision of the plastics. That’ll cut the weight a lot. We’re going to make better nose pads and replace some other stuff as well.

GamesBeat: But the fundamentals are the same? Did you change any parts of the system?

Ellsworth: Compared to last year it’s almost a complete rebuild, architecturally. We have two cameras now, running at 120Hz. We have some infrared LEDs out in the environment as our markers. You can put as many of those in the environment as you want and the glasses can track those to give you head position, so the game engine gives you the right graphics. Our tracking camera is 135 degrees, compared to 100 before. That’s a huge bump in tracking. We added a 1,000Hz gyro. We’ll be sending out Sensor Fusion updates that integrate that.

The wand is getting redone, and the RFID grid. The wand uses the same tracking system, but with a different lens on it. That allows you to move through 3D space and select your virtual characters and move them around. It has the same precision as the head tracking, with sub-millimeter accuracy when you draw or manipulate things.

GamesBeat: Does this app have a name?

Ellsworth: We call it “mARbles.” It’s a very simplistic Marble Madness kind of game. The way we designed it was to be approachable by anyone. It allows any number of players to join, so you have multiple marbles running around in there and you can push each other around. This is a sample game that developers will receive with the SDK. They can use it to develop tabletop games. We’re also going to provide a dungeon builder and a first-person shooter example, as well as a third-person example. 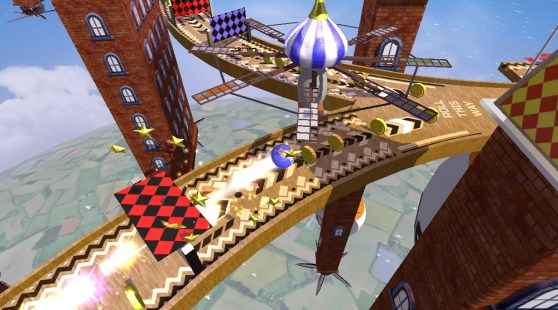 GamesBeat: The graphics look better as well. Has that changed a lot?

Ellsworth: Oh, yes. Our optics partner is based in Japan. They came through the show today and walked by and got to see the results of their work. The funny story is, when we showed them the initial prototypes, it was projectors I built. I’m not an optics engineer, so I bought surplus lenses and stuck them on to build my own projector, essentially. The resolution was so low that even though we were using 720p panels for each eye, every 16 pixels it was kind of blurred together.

When they took all the prescriptions to the lenses and simulated it, they came back and said, “This can’t be right. It’s so bad that we can’t even imagine we were getting that good an experience out of it.” I said, “Um, that’s exactly the prescriptions I was putting into the projector.” So they said, “Well, we can do much better than that.” They were able to make the projectors such that every pixel is addressable and can be resolved between half a meter and two meters, somewhere in there. You can always see the pixels and it stays in focus.

GamesBeat: Is what people see comparable to 1080p? How would you describe it?

GamesBeat: So that’s closer to UltraHD along one dimension.

Ellsworth: It’s tricky, because we’re talking about stereoscopic vision. It’s per eye, so some of those pixels overlap. How do you rank those? How do they really contribute? But in the projector we have 100 percent fill factor. In other head-mount displays, it looks like you’re looking through a screen door or something like that. There’s a bunch of little dots. Our red, green, and blue pixels are all on top of each other. You don’t get that separation. You can read text. It has very little distortion. 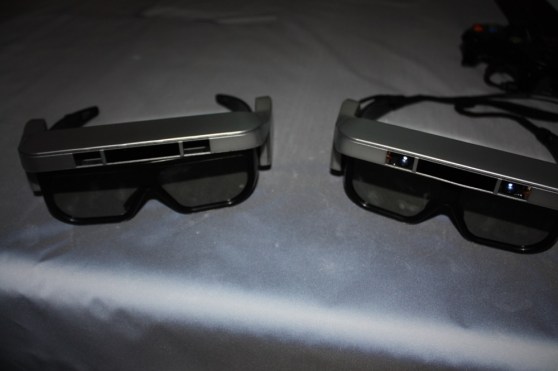 GamesBeat: What do you think about the progress of the AR space and VR space over the past year?

Ellsworth: It’s fantastic. The VR space is exploding. I haven’t seen as much in the AR space, as far as serious development. It’s a lot more difficult to do AR than VR, because when you’re completely blocked off from the world, you don’t have any point of reference. If a pixel isn’t in the right place you don’t notice. But in augmented reality, you have to get every pixel in the right spot. That’s what we’re working on.

GamesBeat: What applications seem like they’ll be the first ways people use this?

Ellsworth: Games are going to be king for a while. The things I’m personally excited about are flight simulators, where you have the reflective material on a wall and you can turn your head side to side. Or very immersive first-person shooters, using it as a giant screen. A little semicircle would be ideal as a racing or flight simulator. Looking to one side, you’d be looking out the window.

GamesBeat: And y’all are moving to Mountain View?

Ellsworth: Yeah! I’m excited to get down there and be right in the middle of Nerdvana. The talent down there in particular — it’s difficult up in Seattle. There’s a lot of software, but not as much hardware.

GamesBeat: A lot of companies seem to be here, a lot of projects going on. Do you need more specialized people in some way?

Ellsworth: We struggled this year. It would have been much easier to get a hired gun in Mountain View. Investment is a factor as well. We were just setting up our offices in Mountain View and we’re always seeing Google’s self-driving cars go by. It’s kind of funny.

GamesBeat: I thought Google owned all the real estate in town by now.

Ellsworth: They might. One of the startups I used to work at, I drove by there in a nostalgic mood. It’d been completely gutted and Google-fied. It made me a little sad, but happy too. Google does a lot of good stuff.

Ellsworth: We’re 10 or 11. I lose track a bit. We brought on a new CEO. We need more electrical engineers and algorithm folks and games people. This next year is going to be all about developer outreach, so we’re going to have to bring on folks to work with developers and get their game content working in an AR environment.

GamesBeat: What are you seeing in the maker movement? All these people who have followed you, are they itching to develop things?

Ellsworth: People are really eager. We’re maybe three or four months behind in getting these early developer glasses out. Every day we hear from them — “We want it! We can develop games once we’ve got it!” We’re excited to finally ship them.

In the next year or so, as I say, we’ll be doing developer relations. We’ll spend a lot of time working with developers to integrate their content. In a parallel effort, our wand is ready to go. We’re going to debug it and send it out. Then our RFID grid. Our optics partners are working on the VR clips. All that stuff’s happening in parallel. The glasses themselves will go through a shrink, just to make them lighter and more robust. We’ll learn a lot from these first glasses and fix them up and go again. 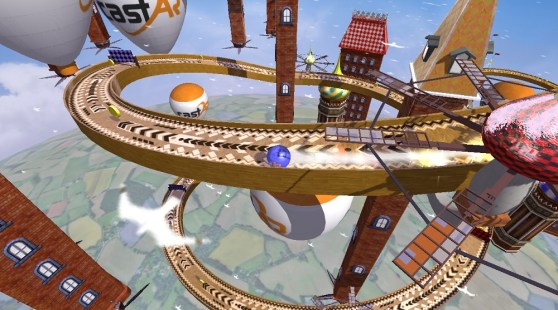