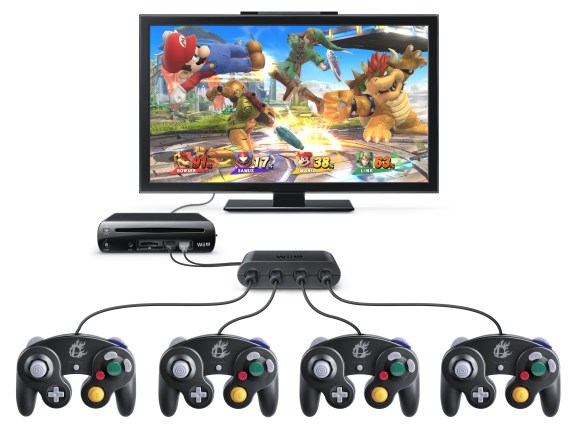 The Wii U with Super Smash Bros. and GameCube Controller Adapter.

To appease long-time fans of the Super Smash Bros. fighting-game franchise, Nintendo is releasing a GameCube controller adapter for the Wii U. Now, we’re finding out that you can use that classic input device to control a bunch of other games on the company’s home console.

The GameCube Controller Adapter, as it is officially called, debuts Nov. 21 alongside Super Smash Bros. for Wii U. The $20 device plugs into the system and gives you four controller ports. While most of us will likely use this to play the highly anticipated four-player fighting game, you can also use it to play Super Mario 3D World or Mario Kart 8. That’s because the adapter works with any game that supports Nintendo’s standard controller options.

That’s pretty good news. It means that anyone with an old Wavebird or GameCube controller lying around now also has another option for local multiplayer games on Wii U (if they pick up the adapter).

While the adapter will debut as a standalone product for $20, you can get it in a bundle for $100 that also includes Smash Bros. for Wii U and a new GameCube controller. Nintendo is selling new versions of the GameCube controller for $30, so you’ll save a bit of cash if you get it all packaged together.

Of course, if you act soon, you could always pick up some authentic GameCube controllers off of eBay for a whole lot less.