Google’s Chromecast media-streaming app is the most popular app in the U.S. for connected devices such as smart TVs, according to a report by market researcher App Annie.

The other top-ranking apps for August include health and fitness app Fitbit, AT&T’s DirecTV media app, Hewlett-Packard’s HP ePrint productivity app, and Eastman Kodak’s Kiosk Connect. These apps are at the top of the heap in a market that is expected to drive more than $61 billion in revenue this year and grow at a compound annual growth rate of 52 percent over the next five years, App Annie said.

Chromecast uses a $35 dongle to connect a mobile device to a TV, allowing users to stream high-definition pictures and videos to a TV from a mobile device or web browser.

App Annie said that the top-five ranking health and fitness apps grew 2.3 times in monthly downloads in August 2014, compared to August 2013. The top five media apps accounted for 40 percent of all downloads in August. That makes sense, because smart TVs are media devices. But the connected device market goes beyond TVs and includes refrigerators and cars.

App Annie looked at 30 top apps this year. It found that 27 of those apps were available last year and that they grew in aggregate downloads more than 50 percent. By comparison, all apps outside of games grew 2 percent in the U.S.

After media, productivity was the second-largest subcategory, with about 30 percent of downloads and four apps in the top 10. Health and fitness was third, followed by the car, home, and watch categories.

GoPro, the maker of mobile sports cameras, ranked high in the media subcategory for its adventure media channels. Gaming apps from the PlayStation and Xbox consoles also did well, particularly those that let users record and share their gameplay via livestreams. For instance, the Xbox One Smartglass app allows a player to use a smartphone to deploy special weapons in an Xbox One console game. 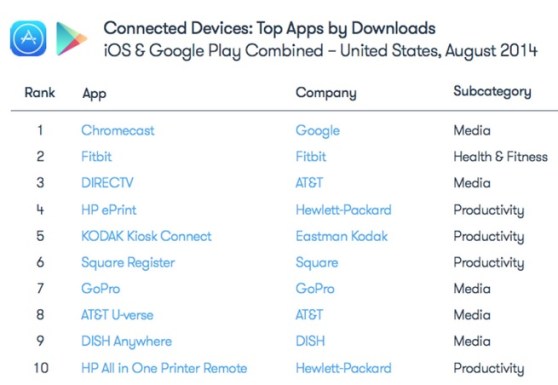