A person can spend their whole life putting together a collection of video games, and they can sell it off in an instant. That’s the story of one meticulously maintained library of gaming classics that are up for sale on eBay right now. 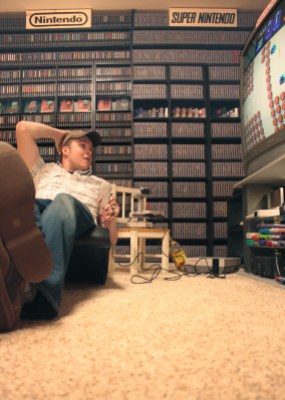 Above: Nintendo Twizer kicking back and enjoying his collection with R.O.B. the Robot.

If you have $164,000, you can buy more than 5,700 games and more than 50 console systems. That’s the sum total of eBay seller Nintendo Twizer’s collection, and you can check out his full list right here. Nintendo Twizer, whose real name is Aaron N. (he wishes to keep his last name private), is an administrative worker for a construction company. He has slowly built up an impressive personal library of Nintendo, Sega, and other gaming releases. His thousands of games include complete software sets for Nintendo Entertainment System, Super Nintendo, N64, GameCube, Sega 32x, Game Gear, and Sega Master System. That’s an incredible feat.

I caught up with Aaron to ask him how he amassed such an impressive list of games.

“My method for putting together a collection like this is just [building it] game by game, searching out garage sales, thrift stores, and pawn shops,” he told GamesBeat. “To me, hunting out the game and giving them a new home where they are appreciated is really a great deal of fun.”

Aaron explained that he loves the thrill of finding something rare that a family is just trying to get rid of, but he also admits that to find certain games, he had no choice but to go online.

“There are a number of great online communities built around classic games,” said Aaron. “This is essentially how I got my start into collecting. I stumbled across an internet forum that focused purely on retro Nintendo games. I was amazed at the amount of people passionate about old games from my childhood. The nostalgia hit me hard — combine that with OCD part of my brain that wants to collect and organize, and I had officially found my hobby.”

And Aaron’s collection is amazingly well organized. He posted the following video tour of his game room on YouTube:

“Speaking of the OCD part of my brain, if something is out of place [in my game room] or doesn’t look right or can be done better, then I’ll fix it,” said Aaron. “That said, I don’t try to be uptight about it or anything.”

But he says he’s never really let his collection get messy. The only time things truly get out of control is when his young children sneak into the room without supervision.

“As you can imagine, I try not to let this happen often,” he said.

So, with all this time and effort put into gathering and maintaining his collection, we had to ask him why he wants to sell it.

Aaron is building a new home, and his wife is expecting another child.

“All wonderful things, but [these are] admittedly time-consuming,” he said. “Not having much time for my hobby for the foreseeable future made me realize that it may be worth listing my collection.“

While he is willing to sell his collection, he won’t have too many tears if he doesn’t get an offer that’s good enough. He says he’d love to have the money to put toward house expenses, but if he doesn’t sell it, he’ll continue enjoying it all.

But whatever happens, he isn’t done collecting. While most of the money from the sale will go toward building the new house, Aaron did tell me that he’ll keep a bit of the money to help start a new library.

“If that happens, my next collection will be much smaller in scale and budget,” he said. “Mostly local garage sale and thrift store finds.”