No, that’s not a submarine periscope — that’s a camera. And it could just be HTC’s future.

HTC today unveiled the Re, a $199 portable camera that can shoot photos and videos without the need for a smartphone. You can think of it like GoPro’s line of activity cameras, except directed at the majority of us who aren’t always on a mountain bike or surf board. And unlike the GoPros, it’s also meant to be held. (Yes, that weird shape serves a purpose.) 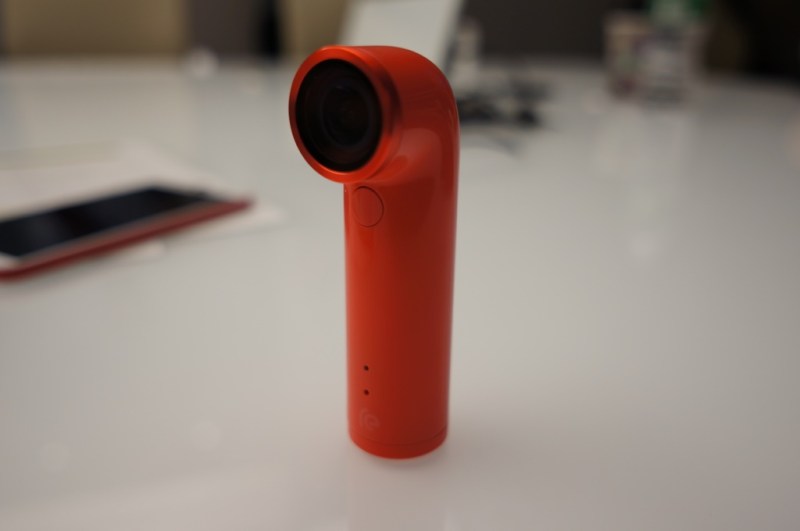 For a company that’s typically been associated with smartphones and tablets for the past few years (though not much of the latter, recently), a portable camera seems like a strange choice for HTC. But given that the company has had more experience designing camera technology than other Android phone makers, not to mention the rise of voyueristic videos from other activity cameras, there may be a huge opportunity for HTC in this market.

You won’t need an HTC phone to use the Re — HTC will release an app for other Android phones, as well as the iPhone.

The Re features a 16 megapixel camera that can shoot 1080p video — basically the same sort of sensor you’d find in a smartphone — with a 146 degree lens (allowing it to capture a wider area than a typical phone). There’s 8 gigabytes of storage built in, and you can also expand it with additional memory cards.The Re’s design also makes it ideal for standing on a flat surface to shoot video. HTC says it will also release an accessory pack that includes a lanyard and lens cover. The camera also features a standard tripod mount on the bottom, making it compatible with a slew of existing camera accessories.

It’s a pretty simple device. There’s no on button. Instead, it instantly wakes up when you grip the handle. And for the most part you’ll be using the giant button on the back of the Re — a single tap takes a picture, while a long hold starts video recording.

And while the Re doesn’t need a smartphone, pairing it with a phone unlocks new capabilities. You can use the phone as a remote viewfinder, for example. And you can also instantly see your Re’s photos on your phone and quickly download them. (It uses a direct Wi-Fi connection to transfer files.)

HTC says the Re will be available before the holidays at Best Buy and other retailers, as well as on its website.