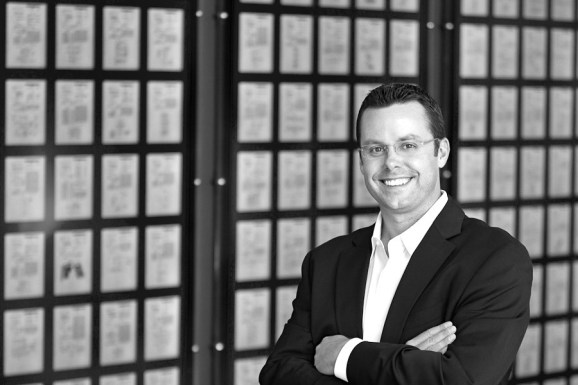 Gimbal wants to change the consumer experience for Americans one beacon at a time.

Gimbal produces smart beacons — small, often circular-shaped objects that are typically installed on walls or near cash registers of retailers and restaurants — in pursuit of its vision of a mobile-only world, where smartphones interacting with beacons will greatly change the way consumers travel, attend events, and even pump gas.

Working in conjunction with mobile devices, beacons deliver location-based content to consumers, provide data points and tools for analytic data, and conform traditional marketing practices into digital-based ones. To that end, Gimbal also provides geofencing, location-based messaging capabilities and also, crucially, intel and analytics derived from consumers synched to beacons when they walk into a retail shop.

“Mobile is the bridge between you and the environment around you. Beacons are unique, a digital journey in a physical world,” Gimbal chief operating officer Kevin Hunter told VentureBeat.

It is not an idle boast. Gimbal has moved quickly to ink deals with companies and other institutions, like the Los Angeles County Museum of Art, for example. In the case of LACMA, visitors who have downloaded the museums’ mobile app on their smartphone are directed to relevant areas of the museum based on information processed by the beacons.

The company also launched a strategic partnership with mobile-relationship-management provider Urban Airship earlier this month in order to bridge the gap on buttressing its base of consumer data derived from beacons.

Gimbal’s calculated roll of the dice means that retailers will begin incorporating beacons into their stores is bearing fruit. That’s because eMarketer said 8 percent of all retail sales this year will be digital, through smartphones or desktops. While beacons had no impact on retail sales last year, for example, they will this year. According to predictions by eMarketer, more retailers will begin experimenting with beacons because they see consumers increasingly embracing mobile devices.

In fact, according to eMarketer and Swirl marketing veep Rob Murphy, half of America’s top 100 retailers are working with beacons — or experimenting with them.

The 35-member team was spun out of Qualcomm’s incubator, Qualcomm Labs, last summer. Qualcomm has equity in Gimbal but not a controlling interest.

Gimbal is not the only beacon producer in town, and they face stiff competition from Sensorberg, Sonic Notify and Kontakt, for example. Apple uses Gimbal produced beacons in their retail stores, according to the company. Hunter is undeterred by the challenge.

“This is about lifestyle enhancements. We’ve created a platform that scrolls across multiple verticals,” Hunter said. “The components of this ecosystem have been building — one where consumers are in control,” he said.