Today Lenovo is releasing the latest version of its flexible tablet, the Yoga 3 Pro, as well as updated versions of its Yoga 2 and 2 Pro, all brought to you in part by “product engineer” Ashton Kutcher. 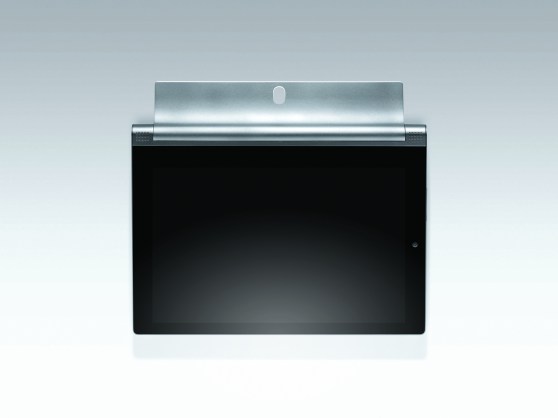 Above: The Yoga 2 in hang mode

Both the Yoga 2 and the Pro 2 get the fourth generation Intel Atom processor and the new ability to “hang” your display on a wall or cabinet. In addition, the 2 gets a slight media update with two front speakers featuring Dolby Audio and Wolfson Master HiFi and an 8-megapixel rear camera.

Lenovo also added two new USB ports, one of which allows the tablet to be used as external storage by smartphones. The tablet will be available for both Windows and Android in 8- and 10-inch sizes.

The 10-inch Windows model, which starts at $399.99, won’t become available until later in October at Best Buy. The 8-inch model begins pricing at $299.99 and hits lenovo.com in November.

Lenovo is zeroing in on the media experience with this latest model. To start, the tablet has a slightly larger 13-inch hi-res (2560×1440) HD screen. But what’s most compelling about the new Yoga 2 Pro is its built-in Pico projector, which lets users turn blank walls into movie screens. It also comes equipped with an 8-watt sound system and subwoofer.

The tablet, which has an 18-hour battery life, can only stream video for 3 hours before it needs to plug in. Still that should be enough to get you through most feature-length films.

The Yoga 2 Pro starts at $499.99 and will be available beginning at the end of October on www.lenovo.com. 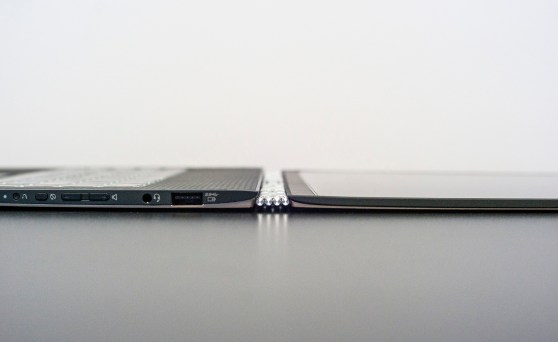 Above: The Yoga 3 Pro laid out flat.

In many ways Yoga 3 Pro is just the stylish older sibling of the Yoga Pro 2. The new Yoga 3 Pro is thinner at 12.8 mm thick and weighs only 1.19 kg. It also comes in new colors: Clementine Orange, Platinum Silver, or Champagne Gold.

It also features Lenovo’s adaptive Harmony software, which is supposed to change the way users interact with apps: for instance, dimming the brightness of the tablet according to the level of light in a room.

The Yoga 3 Pro base model is $1,349 and becomes available at the end of October both at Best Buy and Lenovo’s site.

Overall it seems that Lenovo is really digging deep into the tablet as PC. Lenovo is also delivering a new ThinkPad Yoga 14, featuring a 14-inch display. The computer is geared toward business professionals and starts at $1,199. It will also be available in October.