Who’s faster: Colin Kaepernick, the starting quarterback of the San Francisco 49ers, or Russell Wilson, the QB for the Seattle Seahawks?

Imangi Studios is putting that to the test with the release today of the two NFL players for the Temple Run 2. You can choose to buy the players for 99 cents each and make them run for their lives in Temple Run 2, an enormously popular touchscreen game where you have to swipe the screen to evade a pursuing monster. The deal shows that pro football players have figured out that mobile games can be a gold mine.

The new characters are part of a deal between Temple Run 2 creator Imangi Studios and NFL Players Inc., the marketing and licensing arm of the NFL Players Association. Temple Run 2 is a monster of a game with more than a billion downloads worldwide. In it, you play an explorer who steals an idol and runs endlessly to escape a terrifying demon monkey. Each pro football player in Temple Run 2 is modeled after his real-life persona.

Keith Shepherd, cofounder of Imangi Studios, said in an interview with GamesBeat that the NFL approached Imangi about the possibility of doing a deal. The team mulled it over and decided it was a good idea. Negotiations happened quickly, and focused on how to keep fans engaged.

“This really helps demand and brings new content that can keep the fans happy and very engaged,” Shepherd said. “We’ve got the first two players, and our goal is to keep adding more. Everybody has their different favorite players, and they can lobby to get that player in the game.” 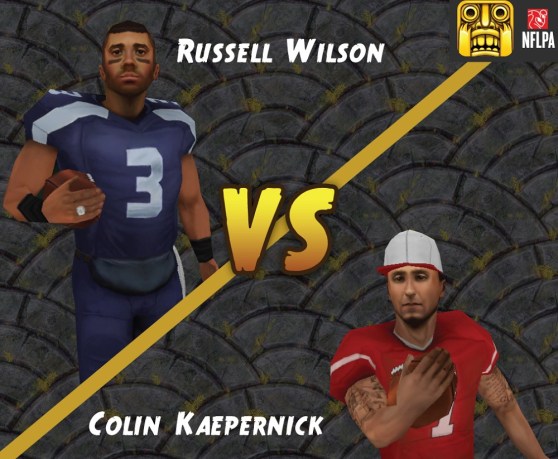 Above: Temple Run 2 with NFL quarterbacks

Imangi previously licensed the likeness for sprinter Usain Bolt, the fastest man alive. Back in August 2013, Imangi offered Bolt as a playable character in Temple Run 2 for a limited time. Kaepernick and Wilson will also be available for a limited time. Each player has unique animations.

“Usain was one of our most popular characters,” Shepherd said.

Shepherd said that fans will be able to voice their own preferences for future NFL players to add to Temple Run 2. He said the deal is good financially for both the NFL and Imangi, which will presumably share the proceeds. On top of that, Shepherd said that the deal will likely create a lot of buzz on social media and increase engagement with Temple Run 2. That, in turn, usually leads to a boost in revenues and greater longevity for the game, which has proven remarkably resilient.

“We are very mindful about choosing the right characters to join the Temple Run universe, and partnering with NFL Players Inc. was a natural fit to include more of the world’s greatest athletes into the game,” said Keith Shepherd, co-founder of Imangi Studios. “We had a great time choosing some favorites and think our fans will enjoy the run even more.”

Fans can check in on Imangi’s Facebook page to see what additional players will be launched in the game.

“Featuring NFL players as in-game characters in Temple Run 2 provides fans with a new way to experience their favorite players using their incredible skills off the field in a unique, fantastical setting,” said Steve Scebelo, vice president of business development and licensing at NFL Players Inc. “Players have embraced the opportunity to become an in-game character and are jockeying for position to be selected by Imangi as the next player to become part of the Temple Run universe.”

Above: Russell Wilson of the Seattle Seahawks flees the demon monkey in Temple Run 2.