I was sweating inside the Oculus Rift virtual reality headset. Clang. Clang. Buzz. I held two virtual lightsabers, à la Star Wars, in my hands, and I had to fight off blaster-bolt attacks from a flying drone. Clang. Buzz. Buzz. Clang.

When I took off my mask, the perspiration was running down my face. Amir Rubin, chief executive of Sixense Entertainment, a maker of gesture-controlled handsets for the lightsabers, complimented me on my Jedi skills. His people had turned the demo up nearly all the way on the difficulty setting. Always polite, he didn’t mention that I had dropped one of my lightsabers at one point. In the virtual world, I didn’t know how to pick it up again. 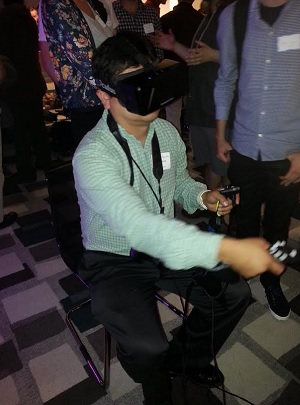 I spent a recent sweaty evening at the crowded “Just VR” virtual reality meetup at Unity Technologies’ headquarters in San Francisco. The meetup drew nearly 500 game developers to see 21 demos that used virtual reality. And that was just a week after I saw hundreds of people viewing 19 virtual reality exhibits at the SEA VR event in Seattle. Since Facebook bought Oculus VR for $2 billion last spring, virtual reality has never been hotter.

“This is the biggest crowd we’ve had to date,” said Nick Ochoa, who organized the Just VR demo meetup with Taylor Freeman. “Our first event in May had 64, and now our list has grown to nearly 900. It’s been awesome to see everybody come together on VR. We want to expose VR to those who have never tried on a headset or experienced a virtual world.”

In Silicon Valley, there are nine larger meetups that happen on a regular basis, including one regular event held by Silicon Valley Virtual Reality in Mountain View, Calif., in the shadow of Google’s headquarters. If I had to guess, I’m pretty sure that the virtual reality community in the San Francisco Bay Area is a lot larger than the one in Seattle. But there’s also a growing community in Irvine, Calif., where Oculus VR is based. Don’t be surprised to see more VR communities springing up, as it seems to attract developers who are either tired of console games or aren’t impressed with free-to-play mobile games.

Oculus, Samsung, and Sony weren’t at Ochoa’s event in an official capacity at the San Francisco event. But the demos and enthusiasts are organic and organized at a grassroots level. Sixense’s Jedi battle was one of the best VR demos I’ve seen. Holding the Sixense STEM controller in my hand, I really felt like I was wielding a virtual sword. I swung it about to block blaster bolts, and I thrust the blade directly at the drone to force it back.

Even a video game and a big-screen TV can’t create the illusion that you’re inside a world. VR gives you presence, or the feeling that you are immersed inside a virtual space. It’s all about creating illusions that trick your mind without making you seasick. I didn’t get sick with the Sixense demo, and it reminded me of the Zombies on the Holodeck demo by Survios, where you have to turn in all directions to shoot a horde of attacking zombies.

William Provancher, founder of Tactical Haptics, is taking a different approach with his Reactive Grip force feedback game controllers. I demoed the device at the Just VR meetup. I could feel the feedback in my hands as I performed actions that simulated pulling on a piece of rubber, shooting a sling shot, and swinging a sword. As I hit the side of a virtual punching bag with my sword, the controller gave me vibrational feedback that made it feel like a proper “thud.” Provancher has been working on the technology for years, and interest has never been better. 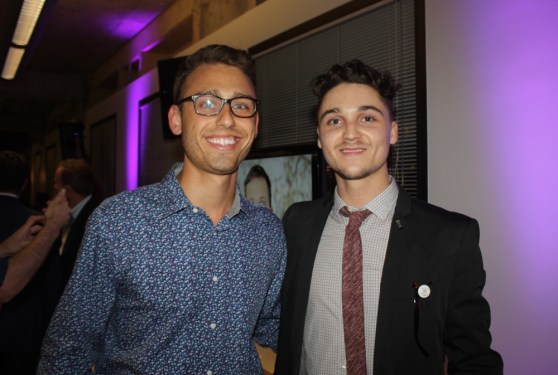 Above: Taylor Freeman and Nick Ochoa of Just VR

The nongame demos were also out in force. James Blaha, founder and CEO of Diplopia, showed me his Oculus Rift demo that tries to improve your vision with VR. His demo helps people with a condition called “lazy eye,” where one eye is stronger than the other. I have this condition, and it means the brain favors images received from one eye. Blaha created a demo (where you fly through rings) that figures out if you have lazy eye and then puts that eye to work. It actually worked, as I eventually saw some sharper images during the demo than I might otherwise have seen, given my lazy eye.

A lot of these demos are passion projects of hardware and software hobbyists. But you can bet that investors will be showing up at these things soon, and some of these kids doing the demos will get the last laugh, just as the young founder of Oculus, Palmer Luckey, has had. A lot of the demos were duds, for sure. Some just make you sweaty and seasick. But somewhere in this crowd, I think we’re going to find another billionaire.

One of the common threads among many of the demos is that virtual reality goggles are only half the solution. What you really need is some kind of gesture control system to interact with the virtual world. Nod founder Anush Elangovan was one of many who showed that you can control things inside a virtual world using a sensor ring placed on each finger. The sensors tell the readers where your fingers are and what you’re doing with your body. It connects via Bluetooth LE and makes you feel like you are really interacting with something in front of you. 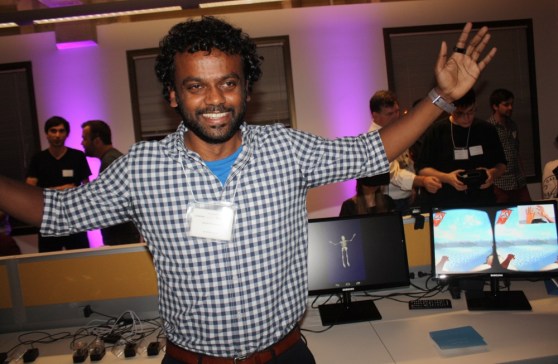