Styx: Master of Shadows offers dozens of ways to die; fortunately, at least some of them are for your enemies.

This stealth title offers a unapologetically difficult treat for those who enjoyed Thief and other old-school, anti-combat games. Stick with it and the titular foul-mouthed green goblin takes you on a surprisingly open-world adventure through a city behind lock and key.

In addition to its classic stealth gameplay, Styx offers some light role-playing game elements. You upgrade your skills using points you earn in the missions, and you earn those points more quickly by completing side goals and other criteria (no kills, time limits, no alerts, etc.).

Styx is available now from Cyanide Studio and Focus Home Interactive on PC (Steam), Xbox One, and PlayStation 4 as a bargain $30 download; I played it on Xbox One. 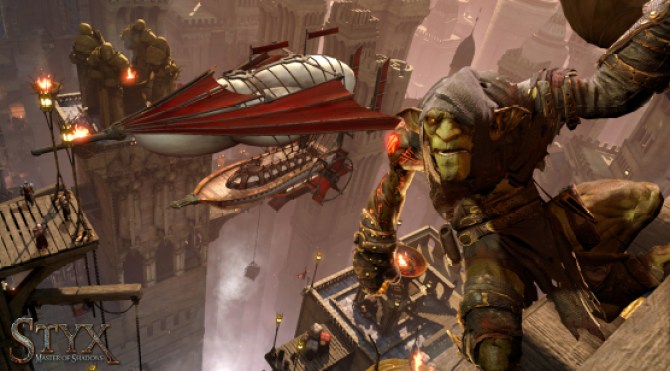 Above: A wrinkly face that only a stealth gamer could love.

The delightful Styx himself

Styx is a goblin, possibly the last of his kind, living in a walled city around the World Tree. He’s intent on stealing the heart of the tree (though you don’t know why at first). He’s been captured, and you’re essentially playing through his story as he tells it to his captors.

His character is a snarky, wrinkled, foul-mouthed, well-voice-acted hoot. Styx appears in commentary in the game and in between-mission cutscenes just enough to give you a picture of his personality, but not so much that he grates. His character is well animated, though the textures can sometimes be a bit rough. A glowing tattoo down one arm is an attractive way to depict the relative level of darkness around you. 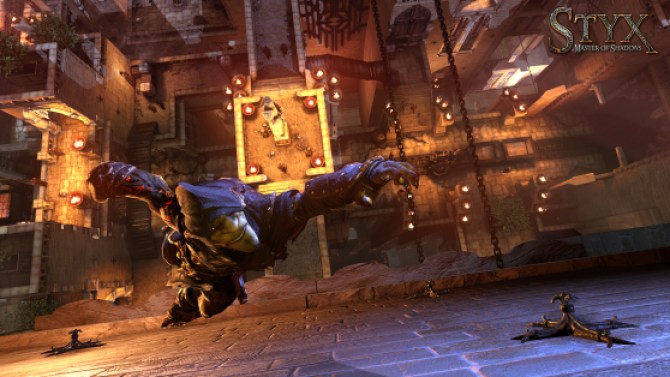 Above: Styx makes the leap from one wall hook to another.

Styx is a throwback, a stealth-focused game that includes only a minimum of UI to tell you what guards and enemies are thinking. You’ll see and hear when they’re on alert, or when they’re on the lookout more than usual because of actions you’ve taken. That’s it. Even in total darkness, guards spot or smell you if they get too close.

You’ll spend the game crawling through tunnels, climbing the walls, sneaking up behind people or elves or bugs and killing them slowly and quietly (or quickly and noisily), and hiding the bodies. Enemies that can’t see but can hear incredibly well, instantly kill you if you’re detected, or that have hyper-alert senses of smell, offer some variety.

If you want more combat with your stealth, this is not the game for you. (See “combat” under the “What you won’t like” section.) But if you want a challenging, intriguing traditional stealth game with some RPG-lite elements … Styx will surprise, and possibly even enthrall, you. 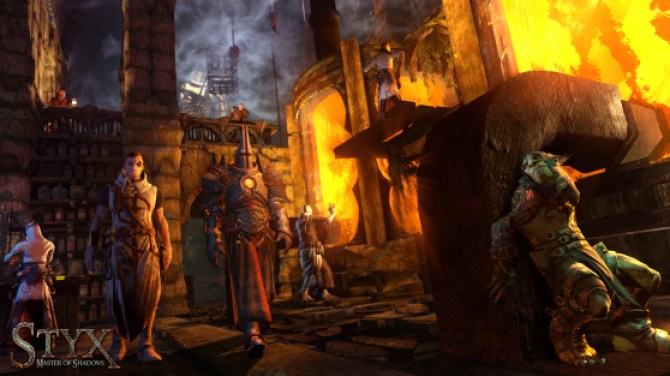 Above: Trust me, you do not want those guys to find you.

The many paths to freedom

I truly enjoyed discovering the many ways to clear through a given mission. Even in a single large room, you can usually take a half-dozen paths. Some need no killing but do require perfect timing. Others call on you to leave a trail of (well-hidden) bodies in your wake. Still others require arranging “accidents” with poison or dropping chandeliers. You can go up by climbing and make your way around top levels, or down and make your way hunched under tables or ore carts or benches.

Even your kills have variety: Sneak up and strangle them, insta-kill them from afar with your (limited) throwing knives, poison them, push them off a ledge, crush them with a falling object. Hide the bodies in dark rooms or chests or wardrobes or eliminate them with acid, so the other guards don’t alert, or use them to deliberately alert the guards to free up another path for you to follow.

Kudos to Cyanide for giving Styx so many options; it adds immeasurably to the game’s feeling of quality and realism. 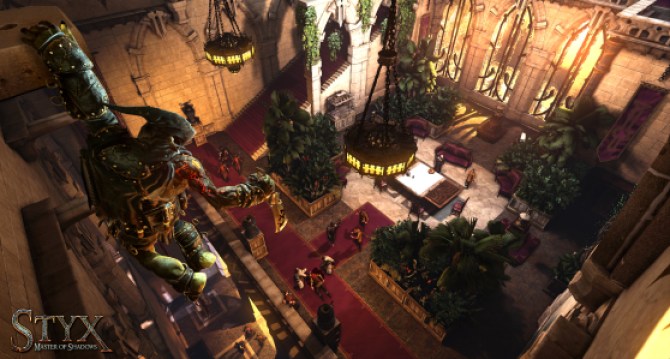 Your clone: You, only more expendable

Styx comes with amber abilities, skills that use the sap from the World Tree. You’ll find or pickpocket vials of it, and if you have enough, you can become invisible for a limited time. But you’ll always have enough to use two abilities: amber sight and your clone. Sight offers you a lit-up vision of your environment, and it highlights enemies and things you can interact with. Your clone is a copy of yourself (under your direct control) that can do anything but fight or pick up items.

The clone can poison food and unlock levers. It can squeeze through locked gates that you can’t. It can lead guards on a merry chase so you can get by, or (with some skill tree points) grab and hold them so you can kill them or sneak past. And it can poof into a cloud of smoke to further distract your enemies. I found it a tremendously fun addition to gameplay, another key to solving some of the game’s hardest levels.

See the clone in action in Focus Interactive’s video:

I’ll say it right up front: I’m timid when it comes to stealth games. I save a lot, which adds to the time it takes to play, I’ll try out different combinations of approaches to a particular problem, and I like collecting and side missions. But it took me well over 10 hours to play through the first two missions of Styx.

The game offers a solid 15 hours of play even for focused folks who zoom through stealth games faster than I do, and it was easily 30-plus hours for me.