It’s a brave decision to start again and leave behind your family, your friends, and everything you’ve worked for. It’s often easier, and safer, to accept the mundane aspects of everyday life and kick your true passions to the curb.

But Ana Ribeiro decided to pursue her dream of making games; she quit her steady government job in Brazil, sold her car, and abandoned her flourishing empada business. “Starting a life from zero,” as she described it in our Skype chat earlier this week. Ribeiro travelled nearly 5,000 miles to London so she could study programming and video game design, and if you play her incredible Oculus Rift title, Pixel Rift, you’ll have to agree that it was worth the journey.

Pixel Rift is a stunning demonstration of the possibilities offered by VR. It’s a playful journey through video game history that meshes virtual and augmented realities together to create something truly special.

The five planned levels offer glimpses of life through the eyes of a young girl growing up, trying to indulge her gaming passion across a range of consoles — from 1972’s Magnavox Odyssey to the Nintendo 64 of the late ’90s — despite authority figures and everyday life getting in the way. It serves as an apt analogy of Ribeiro’s life.

At last month’s EGX gaming show in London, I played through one level of Pixel Rift. It took about 15 minutes and made more of an impression on me than all the other triple-A and indie titles on offer. I wasn’t alone — everyone I spoke to who attended Ribeiro’s small stand in a quiet upstairs corner of the show was blown away by the game. 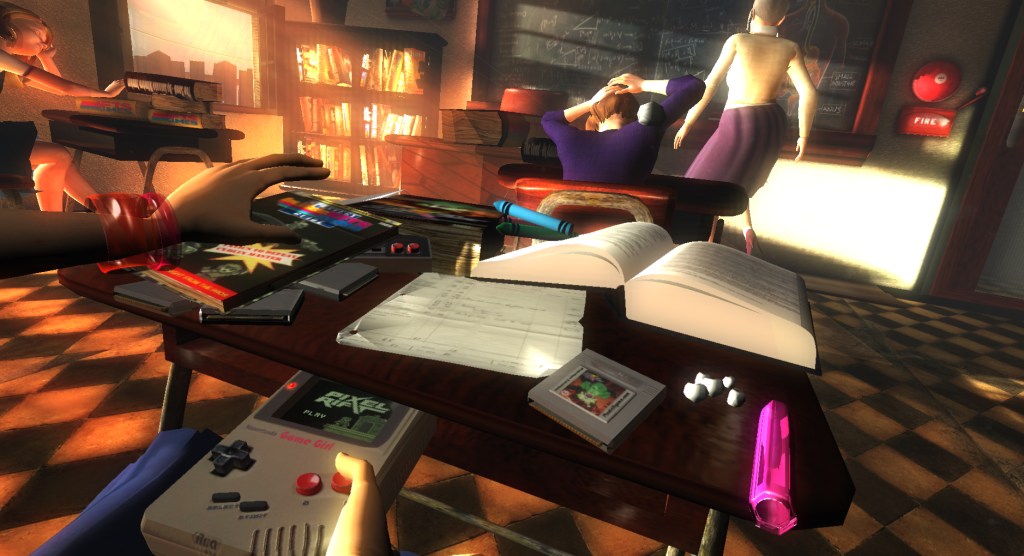 Above: Sneaking some game time in class.

The demo level I played — available for free download if you’re lucky enough to already have an Oculus Rift kit — places you in a sun-dappled high-school classroom, the teacher droning on and your classmates whispering messages or sleeping at their desks. Carefully avoiding the unwanted gaze of the teacher, you’re free to sneak some time on the Gameboy (renamed “Game Girl”) that you’re hiding under your desk, using the NES pad you’re holding in real life.

While making progress in the suitably old-school 2D platformer, also called Pixel Rift, you realize that the pink spitball gun sitting on your desk actually serves a purpose. Making certain shots unlocks secrets in the game and trains you up for the boss fight to come.

The climax of the demo sees your (virtual) real life and the 2D game merge before your eyes in an explosion of pixels and spitballs that feels like a dream.

It’s an ambitious project, particularly coming so early in the Oculus Rift story, but Ribeiro clearly has the passion and drive to pull it off. 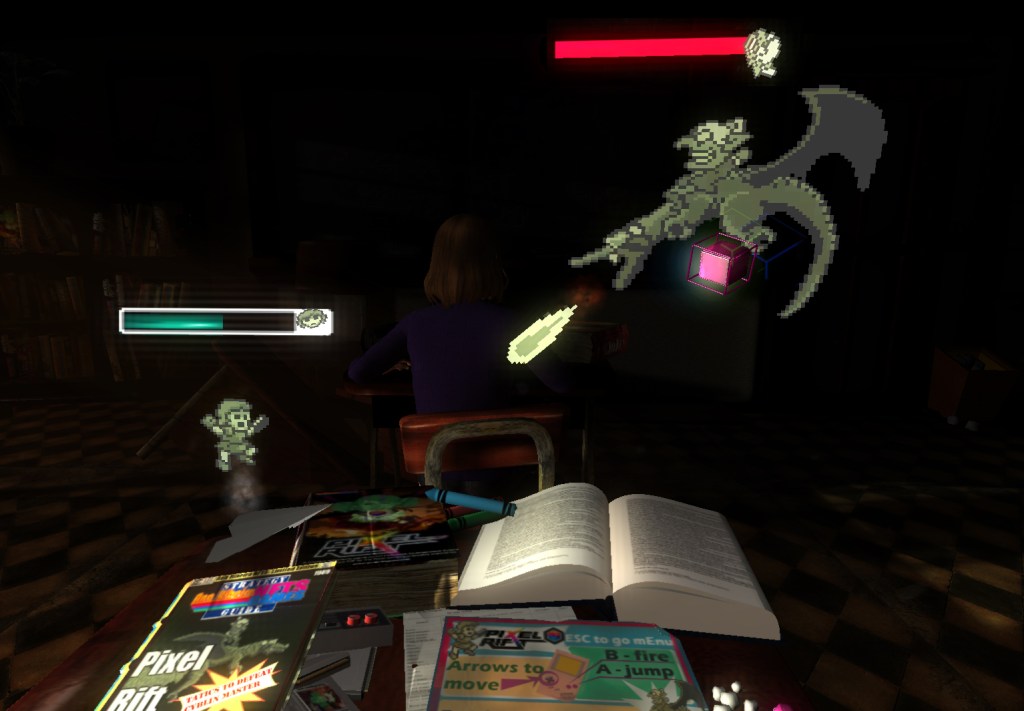 Above: Pixel Rift mashes augmented and virtual reality together in a gleeful explosion of pixels.

Growing up in Maranhão, a sleepy rural state in north Brazil, Ribeiro and her three brothers were always playing games. She fondly remembers the first console her family owned, the Magnavox Odyssey 2. In fact, she showed me another one she’s recently bought from eBay for research purposes. She’s waiting to get hold of a power transformer so she can hook it up to her TV. Ribeiro and her brothers also played Atari, Sega Mega Drive, and the Phantom System — an NES clone only released in South America.

She went on to play first-person shooter Counter-Strike competitively in her late teens, representing different cyber cafés for three years. “We were pretty good,” said Ribeiro of her all-female team, Myth, “but I can’t say we were the best ones — the best female team from Maranhão, but there were not many other ones. It was mainly men playing it.”

Still, Ribeiro and her friends took it seriously, studying strategies for each map and how to respond to different situations. They remain close to this day: “We have a WhatsApp group where we keep in touch, and next year one of them will get married and we will be the bridesmaids.” 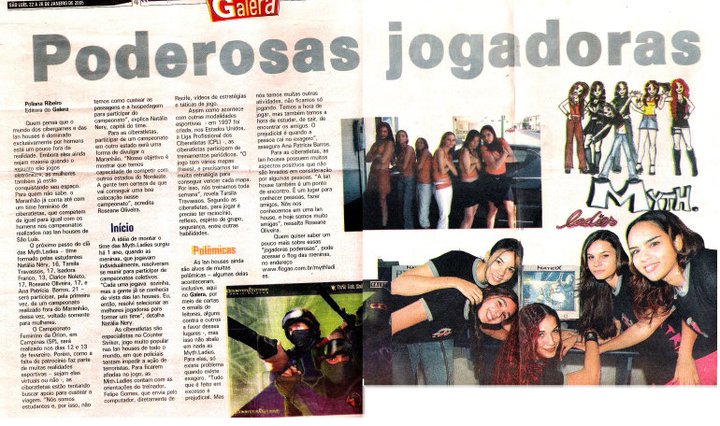 Despite this comprehensive gaming education, Ribeiro never thought she would end up making games herself. It just wasn’t an option: “I always played games my whole life, but when I was younger I never thought I would make games because it wasn’t really something you could think about.

Instead, she studied psychology at the age of 17 and ended up working for the government, dealing with divorce papers day after day. “It was horrible,” she said. “For five years I was working in this place, dealing with lawyers. It was not my thing.” Her desire to create and innovate was completely suppressed: “In this job I couldn’t change the font! I had to use Times New Roman. I really felt like something inside of me was screaming.”

Desperate for a creative outlet, Ribeiro started making and selling empadas — Brazilian pies, sweet and savory, around the size of a muffin — on the side. “It became 4,000 pies a month,” she said, explaining how the business grew rapidly, eventually employing two people to help bake and sellers that would distribute the freshly-made empadas to stores in the early morning.

Ribeiro’s lightbulb moment came when she attended a course to help plan the future of her pie business. “There was this question about where you want to be in five years time,” and, despite dreams of heading an empada chain to rival McDonalds — Empadas Kero Maiz, meaning ‘I want more’ — Ribeiro had a sudden moment of clarity. “Am I going to be doing pies for the rest of my life?” she wondered; the answer was clearly, ‘No.’ 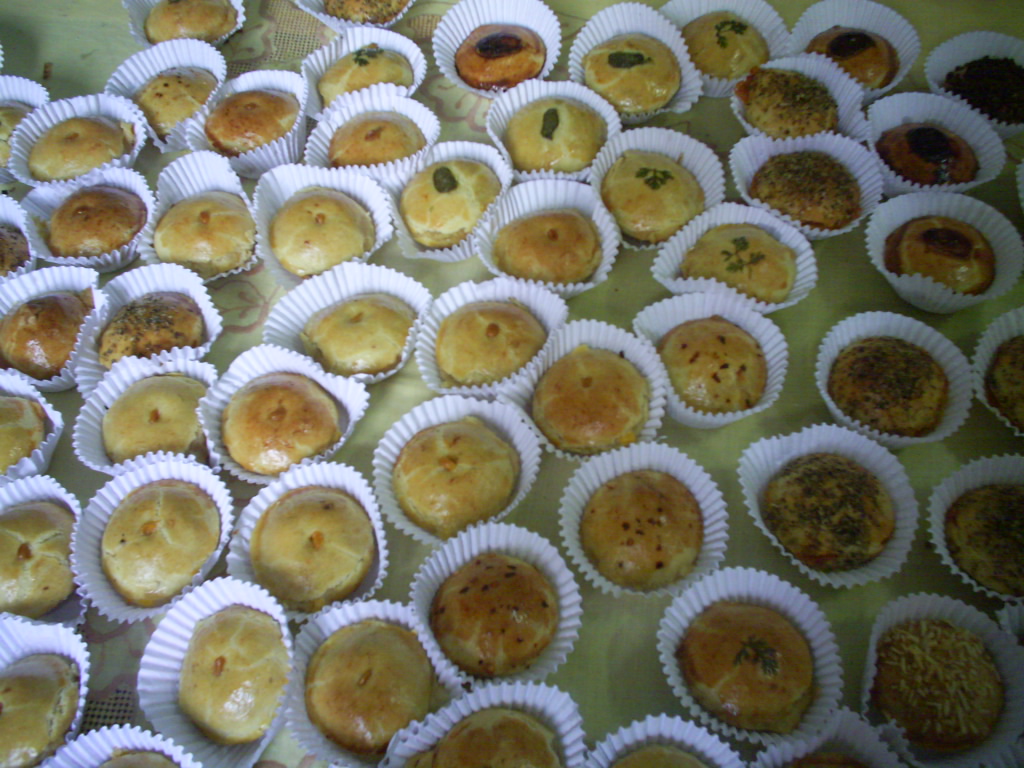 Above: Man, those empadas look tasty.

Ribeiro made the bold decision to head to Europe, starting her life over again. “I just decided to leave everything,” she said. “I’m going to sell my car, leave this job, and live in Europe and do what I want to do.”

So she enrolled on a one-year programming course in London, despite having no previous coding experience. It wasn’t an easy introduction, by any means. The course dived straight in to C++, a programming language used widely across a range of industries, including gaming. “It was pretty hardcore,” said Ribeiro.

I asked if that wasn’t too tough a start. “It’s like learning how to drive,” she said. “If you learn how to drive in a really fast car, then any car you get after this is just amazing. You can fly.”

Four years later, she’s now finishing her Masters degree in game design at the National Film and Television School, and Pixel Rift is her final year project. She’s hoping to bring the finished game to market next year, releasing it in five episodes, each around an hour long. 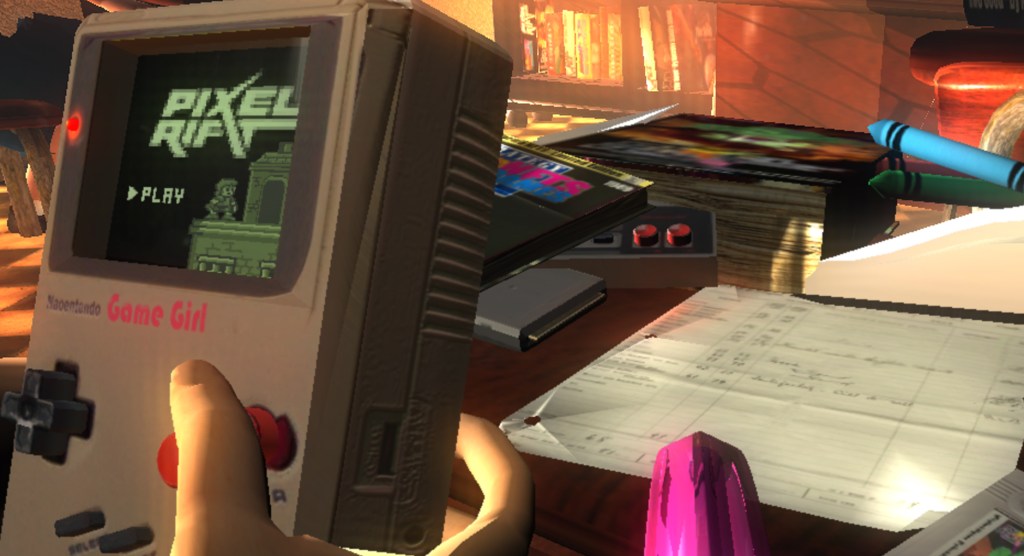 Above: Getting up close and personal with some clandestine handheld gaming.

Ribeiro’s always been good at selling things. Way before the pies, when she was five years old, she used to go with her mother, an artist, to work. She would sell her own drawings to her mother’s colleagues, putting two prices on each label: “It costs a pound, but if you don’t have it, I’ll accept 10p.”

She bought rainbow colored Slinkies with the money she made. “They used to break really quick,” she reminisced. 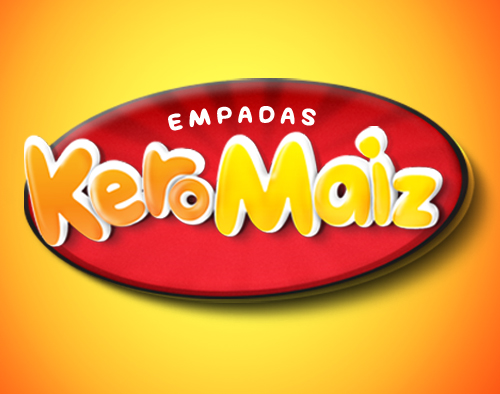 Today, Pixel Rift is currently waiting for Steam Greenlight approval. This would pave the way for Ribeiro to sell the game on Valve’s online store, one of the largest digital marketplaces in the world. It’s also on show at the Brazil Game Show this week, with an potential opportunity to sell digitally in Brazil and worldwide through another sales network.

Even if Ribeiro doesn’t get approval for Steam, she says she’ll “find a way” to sell her game. I don’t doubt her at all.

The dawn of something huge

Being an Oculus Rift developer right now is both exciting and scary. It’s a world full of possibilities, but it’s also a dive into the unknown, and it’s difficult to really tell how big it’s going to be.

“I think it’s good to be in at the beginning because you discover things that no-one ever discovered before. It’s more exciting. We kind of don’t know how to work with it,” said Ribeiro, who stays in touch with other VR developers “creating crazy things” online.

“I think VR is going to take over,” said Ribeiro. “Not just for games. We have everything we need now in the moment, and it is going to be big.”

For Ribeiro, who is so positive that she’s even enthused by the bleak, gray London weather, it’s a great time to be a game developer, and she doesn’t regret leaving her old life behind for a moment.

“I’m glad to be alive now and be a part of this thing.”