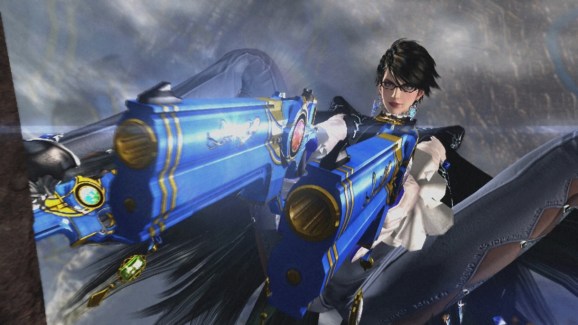 Bayonetta 2 isn’t what you would expect from a Nintendo game. It stars a giant woman in a skin-tight leather outfit who isn’t afraid to throw colorful four-letter metaphors at her enemies. And while those aspects make it a curiosity as a Wii U exclusive, it’s got a lot going on beyond the “mature” content.

Nintendo and developer Platinum Games have partnered up for Bayonetta 2, which is a sequel to the original character-action game on the Xbox 360 and PlayStation 3 (and now the Wii U as well). It stars the titular Bayonetta who is a lanky-yet-curvy witch who must fight off waves of demons and angels to rescue her friend from an eternity in hell.

Fans of the series will immediately recognize the gameplay — as will anyone that’s enjoyed similar character-action games like God of War. It is, at this point, a well-worn formula. So while the character Bayonetta fights with the denizens of heaven and hell, the game is waging its own battle with time and relevance.

But the good news is that Bayonetta is pretty good at fighting.

Bayonetta is one of pop culture’s coolest characters in years

I love Bayonetta. I don’t think gaming has a cooler character right now, and that comes down to a lot of things — mainly, though, it’s the character’s confidence

It doesn’t matter if she is facing down the Demon of Sloth or if she is Christmas shopping, the witch is always the coolest person in the room. That’s especially impressive because it isn’t about having an edgy attitude, it is about her poise and elegance.

For example, the first scene of Bayonetta 2 has the witch shopping for Christmas presents in what looks like Manhattan. The woman is already the tallest person on the street, and she’s wearing 6-inch high-heeled shoes, an elaborate white gown, and a matching wide-rimmed sun hat covered in white flowers. Bayonetta doesn’t give a damn that all this makes her stand out, and she also doesn’t acknowledge it.

She’s completely comfortable in everything. This is especially charming because most “cool characters in games” — whether they are a man or a woman — usually end up being Indiana Jones (Uncharted’s Nathan Drake) or Ripley from Alien (Metroid’s Samus). But where Samus is a warrior whose gender is hidden by her suit most of the time, Bayonetta does not try to hide. She loves fashion. She has hips. She has a gait that would put Giselle Bundchen to shame.

Even when the game gets a bit exploitative, and the camera zooms up around her shapely butt, between her legs, or around her chest, Bayonetta basically just looks at you and says “deal with it.”

It’s awesome — and sure, a lot of this was in the first game, but the fact that Platinum didn’t lose Bayonetta’s swagger and actually amplified it is wonderful.

It’s worth going on about how cool Bayonetta is because she is a character that might only work in games. I don’t think a human actor could do the character justice. Maybe she would make sense in a comic, but then you wouldn’t get to see the way she walks. Even an animated movie wouldn’t give you the sense of power you have when you play as her.

Honestly, if a character like Bayonetta could exist in other mediums, that character probably would already exist by now. It’s a testament to this medium that it can claim Bayonetta to its credit.

Gigantic fights that are easy to keep track of

Bayonetta is a tall person, but she’s often pretty tiny next to some of the enemies she faces during her adventures, and that’s one of the game’s best aspects. The battles are enormous and often feature tons of enemies and on-screen action. In fact, Bayonetta 2 is basically just one big showdown after another.

This might involve you cruising on the back of a jet while gigantic demons fly in to attack you. It might involve a large four-legged angel with a sword for a face.

Does that sound insane? Well, it is. And it looks as crazy it sounds.

But no matter how ludicrous or out of control the fights get, somehow Platinum designed the game so that you never lose track of the action. This is partially due to a smart camera that does a great job of keeping your targets on the screen. But it’s also thanks to the expressive and well-animated monsters.

Even near the end, when I was facing several powerful angels and a half dozen other creatures, I never felt overwhelmed by what I was looking at.

Platinum gives you plenty of reasons to replay

Guys, can we get real for a second? I know that a lot of people are into Platinum’s games and the way they work. They are all about intense combo-based fighting through crazy levels and then replaying those levels to maximize your score.

That isn’t really for me. Thankfully, the game works as a one-time beginning-to-end experience. For you crazies who want to get the pure-platinum medal on every stage, the game gives you plenty of ways to keep the action fresh. Multiple costumes and weapons makes Bayonetta look and feel different. You’re also not gonna unlock everything with a main playthrough.

While I was finished with the game when the credits rolled, I can recognize that you’ll have plenty left to enjoy if you aren’t.

While even in her second outing, Bayonetta still feels fresh and cool, the game she’s in is starting to feel a bit outdated. Don’t get me wrong. Bayonetta 2 is fun to play, but it doesn’t present a whole lot new that we haven’t played before.

We’ve had these kinds of games since God of War in 2005 (even though Bayonetta is different in a ton of ways), and that makes it easy to get a bit tired of brawling through level after level for eight hours.

Is Bayonetta a good game? Yeah. It is. But if you’re burned out on combos and flashy battle sequences, it isn’t doing anything new to win you over.

Bayonetta is a witch who has to deal with the forces of heaven and hell. As you might expect, that means the plot deals with good and evil. And, like the gameplay, it doesn’t take too many chances.

The narrative is a bunch of clichés that had me checking my phone and skipping cutscenes. It’s not all bad. The characters are mostly interesting, and the presentation is well done. I also like that it takes place during Christmas time. But that stuff isn’t enough to make up for another lackluster gaming story. It’s a bummer because Bayonetta is so cool, and she deserves the chance to shine in something better.

Bayonetta 2 is surprising. Some of that is because it is an M-rated Wii U exclusive. It’s also because it is a good game in a genre that doesn’t seem long for this world. With everything moving open-world and online, Platinum is still sticking to it’s area of expertise. And it’s working.

I don’t know if I’ll ever need a Bayonetta 3, but I’m certainly glad that I got to play Bayonetta 2.

Nintendo provided GamesBeat with a digital-download code of Bayonetta 2 for the purposes of this review. It will debut exclusively on the Wii U in North America on Oct. 24.