Amazon hasn’t forgotten about the importance of cheap devices even as it struggles to be taken seriously as a high-end smartphone maker.

Amazon’s first Fire tablet was one of the first $200 Android tablets. It wasn’t all that fast or attractive, but it proved that Amazon could move beyond e-readers and do something interesting with tablets — and all for a price much lower than the competition.

Now, Amazon has released its cheapest tablets yet: A $100 6-inch Fire slate and a 7-inch model for $140. They’re not particularly pretty. And they resemble bricks more than something like the svelte iPad Mini (see comparison pics below). But for the price, these are surprisingly functional gadgets. 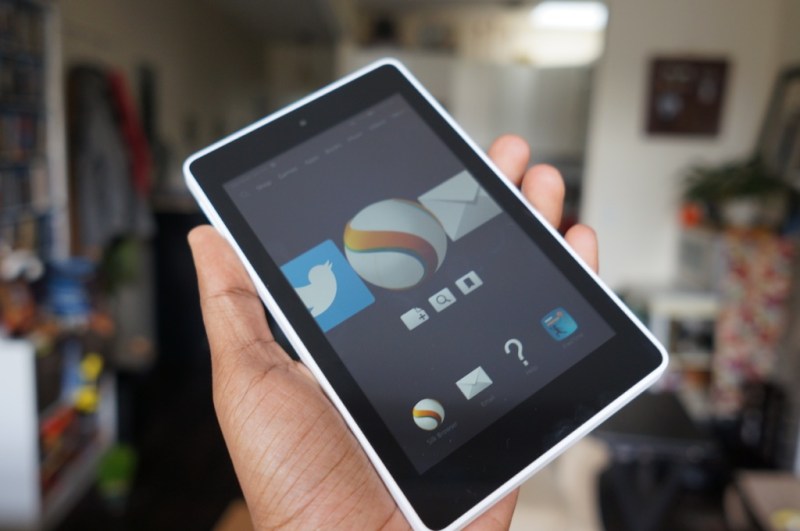 It’s what’s underneath that counts

Near-countless cheap tablets are on the market, but I wouldn’t recommend most of them. They’re often too slow to be all that usable, and they tend to feel cheap. Amazon’s new Fire HD models distinguish themselves by being neither.

Sure, they could use some slimming down (they have a laughably huge amount of bezel around the screens), but for devices in this price range, their plastic cases feel solid. They both also run on quad-core processors that keep things moving along smoothly. I expected a frustratingly slow experience when I first got my hands on these tablets, but they feel comparable to most sub-$200 tablets — and in some cases, they feel faster than more expensive slates.

The Fire HD 6, in particular, is a marvel for its size, price, and speed. We haven’t seen too many tablets with screens around 6 inches — that’s something that’s more commonly seen among huge “phablet” smartphones — but I can see such a small tablet tempting so many potential buyers. It’s unmistakably a tablet when you’re holding it in your hand, and since it doesn’t have any cellular connectivity, you won’t be confusing it with a phablet any time soon. 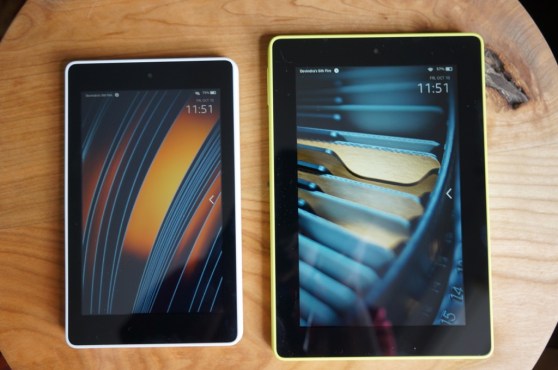 But while the Fire HD 6 has a lot going for it, I prefer tablets with screens around 7 inches to 8 inches. They give you far more screen real estate than even the biggest phones, but they’re typically much smaller and lighter than big tablets over 10 inches.

This is where the Fire HD 7 comes in. It’s competing with other inexpensive small tablets like the $230 Nexus 7, but it’s also significantly cheaper. (Amazon’s $180 Fire HDX tablet is an even better Nexus 7 competitor, with a significantly faster processor and higher-resolution screen.)

The new Fire HD tablets’ 1,280-by-800 resolution screens are adequate for reading and watching videos, though it’s nowhere near as sharp as the 1080p display on the Fire HDX and other small tablets.

Both tablets get around 8 hours of battery life, according to Amazon. They both ended up lasting me more than a day with casual usage, which mainly consisted of browsing Twitter, reading e-books and a few websites, and viewing a bit of video.

Amazon also offers a kid-proof version of the Fire HD tablets for $150 and $190 with a drop-resistant case (which includes a very useful two-year no-questions-asked warranty). 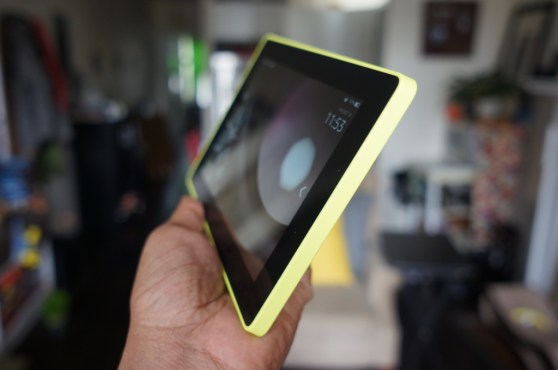 The cost of cheap

While the prices of both new Fire HD tablets are impressive, they also include Amazon’s “special offers,” ads that appear on your tablet’s lock screen. You’ll have to shell out an additional $15 if you want to turn those off.

In other words, you’ll need to pay $134 (for the 6-inch tablet) or $174 (for the 7-inch) for a 16GB tablet with no advertising, if you want something comparable to what competitors offer.

Amazon isn’t technically lying about its gadget pricing, but over the years, it’s become more comfortable with obfuscating a device’s true cost. When Amazon first started offering the Kindle and Fire tablets with Special Offers, it advertised the more expensive price, with the ads as a sort of discount. Now it’s doing the reverse.

The lock screen ads (which likely earn Amazon quite a bit more than just $15 per customer) are easily avoidable, but they’re just one of many advantages Amazon has over its competition. Amazon doesn’t have to worry too much about marketing since it has one of the most visited storefronts online. And it can also make ultra-cheap devices more profitable since it has a more direct relationship with customers (although Kindle devices are also sold in many electronics retail stores). 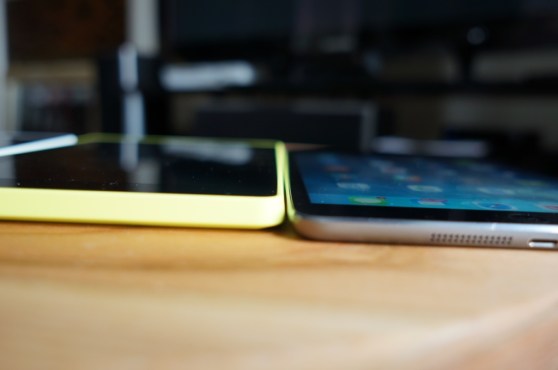 Image Credit: Devindra Hardawar/VentureBeat
It’s also worth mentioning that these new Fire HD tablets are surprisingly heavy when compared to their competitors. The Fire HD 6 is far chunkier than any phablet, and the Fire HD 7 quickly started to strain my wrist if I was holding it with one hand. At this price, Amazon had to make a few concessions — a hefty design was chief among them.

I realize it’s a tad unfair to compare the entry-level Fire HDs with Apple’s high-end iPad Mini, but I think the pictures also show just how little the two tablets differ. I’m sure many people would rather save a couple hundred bucks and live with a tablet that’s a fraction of an inch thicker.

Amazon’s pricing for the new Fire HD tablets may feel a tad suspect, but it’s hard to deny the power of a $100 tablet. What’s more surprising is that the Fire HD tablets are more than just cheap slates.

If you need more power, you can always upgrade to one of Amazon’s more powerful HDX slates, or take a look at the pricier competition.

But for most consumers the Fire HD tablets are more than enough — and that’s a sign of things to come.