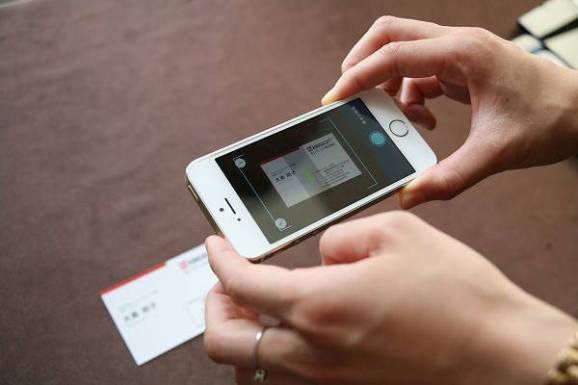 Years ago, a little company called Bump promised us a world in which we could forgo business cards by simply “bumping” our phones together to immediately exchange contact information.

Well, that didn’t work out so well — Google bought the flailing Bump a year ago. But even though we still hand out traditional business cards, we digitize them with apps that attempt to bring contact information in the digital age. And as business information continues its shift from paper to computers, and now to the cloud, Intsig, which makes the card scanning app CamCard, has released a new enterprise-focused version of its popular consumer-grade app, CamCard Business. The app is now available in the Apple App Store, Google Play store, and on Salesforce App Exchange.

More than 3,000 businesses are already using the app with their teams.

While the personal app is all about helping a person stick their business cards into their phone and lose the bulky cardboard, the enterprise version wants to make valuable contact information into a team or company asset. The new app can be hooked up to Salesforce, Microsoft Dynamics, or SugarCRM to turn business contacts’ information into data a whole team can use. Google Apps for Business integration is also coming.

“The major purpose is that, we think that business cards are not only the individual’s assets but also the company’s assets,” said Intsig marketing director Louisa Cao in an interview with VentureBeat.

Although there are many other business card reading apps, Intsig’s says its technology is more accurate than other apps. Intsig’s optical character recognition (OCR) technology detects writing letter-by-letter, and its small engine is self-learning, meaning that “the more cards scanned, the more accurate it will be,” as Intsig founder Michael Zhen told VentureBeat.

More than a digital Rolodex

While business cards are common business practice around the world, CamCard’s 100 million users are mostly in China (40 percent), with 12 percent in Japan, 15 percent in the U.S., and 15 percent in Europe.

But Intsig has bigger plans for its card scanning tool.

Later this year, the company will be adding messaging to its app. While it may sound like a trivial feature, the company sees that as way to turn these business cards into “real people,” as Cao said.

Moreover, business cards could also become marketing tools, with the cards eventually being customizable. People could transmit updates about their company or themselves to other people they’ve connected with and have uploaded their information through CamCard.

Intsig is also behind the CamScanner app, which lets people use their smartphone’s camera to take a photo and turn it into a PDF document. It wouldn’t be a surprise if the company eventually bridges or connects the two apps to let people manipulate the information they scan in even more ways (e.g., connect contact info to a scanned document, and so on).

Ultimately, Zhen says that CamCrad Business is not only good for his company but also for his customers, who can now do much more with the contact information they’re collecting.

CamCard business is now available for download and at different pricing plans, depending on a company’s needs.