With Far Cry 4, French video game giant Ubisoft wants to capture the hearts of gamers who love first-person shooters set in open worlds. In the fourth installment of this travelogue shooter series, Ubisoft intends to do that by delivering a strong story, compelling characters, and a much larger and more vibrant setting to explore.

The newest game, set in the Himalaya mountains of a fictional country dubbed Kyrat, follows a familiar narrative involving a psychotic but charming villain who commands an army of followers in a beautiful but very dangerous tourist trap. This game has two or three times more quests than Far Cry 3, which debuted in 2012. In something that is uniquely Far Cry, you can set loose an enraged elephant to take out your enemies for you in this game. And in contrast to Far Cry 3, many of the open-world activities are directly tied to the story and introduce you to new characters, said game director Patrik Méthé in an interview with GamesBeat.

Méthé spoke with us at a recent preview event where we played a near final version of Far Cry 4. The team is in crunch mode, stamping out bugs ahead of the Nov. 18 release date that could get in the way of this formula. But it won’t be easy to match the great critical reception of Far Cry 3. On Metacritic, a review aggregator, Far Cry 3 at an average rating of 90 out of 100. We spoke with Méthé about the game as deadline for shipping nears for debut on the Xbox One, the PlayStation 4, the Xbox 360, the PS3, and PCs.

Here’s an edited transcript of our interview with Méthé. 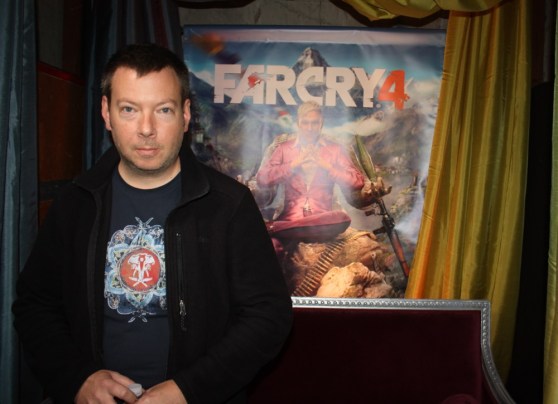 Above: Patrik Méthé, the game director for Far Cry 4 at Ubisoft.

GamesBeat: How long have you been on the project?

Patrik Méthé: I’ve been there the whole time. We transitioned from FC3 and started discussing FC4 directly.

GamesBeat: Did you have a big role on the previous one as well?

Méthé: Yes, I was game director on FC3.

GamesBeat: What did you want to do that was different this time around?

Méthé: With the experience we had in FC3 — it’s the same in every project. Even as you ship, you know there are some areas where you could have been better, or some features that you need to cut for lack of time. In nearly every area, there were improvements to make.

Most important, players are spending more than 50 percent of their time in the open world — doing activities or outposts. We wanted to put a lot of focus on that area. We came up with two or three times as many quests as we did in FC3, and those quests are much more embedded in the fantasy of the world. Most of them will be introduced by a real character and you’ll understand where it fits in the ecosystem of the game.

Another good example is the guns for hire, the people who will come and fight alongside you. In FC3, we added this at the last minute, but then we had to cut it because we didn’t have enough time to work it out. It’s really a game-changer in FC4, creating all kinds of anecdotes on its own. 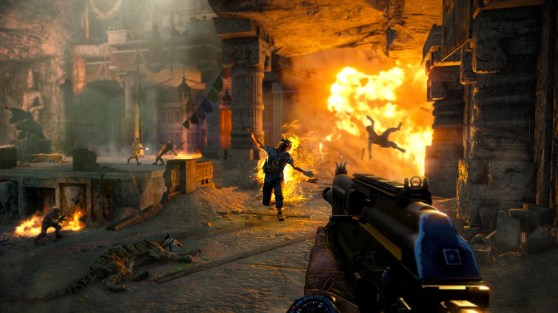 Above: You can blow up your enemies with well-placed shots in Far Cry 4.

GamesBeat: I didn’t get to hire anybody yet when I played the demo. If you have a village to take over or something like that, you can call them in?

Méthé: Yeah, you have multiple ways to bring them in. It’s fun to experiment with. At the core, you have two options. One, you can tell them to go to a certain place, and if they see the enemy they’ll engage them. One of my favorite tactics is to find a vantage point, look over an outpost, and tell them, “Go there.” Then, while he’s fighting, I’m using a sniper rifle to take down enemies while they’re distracted. You can also ask them to follow you directly, which is cool, because wherever you go in the world, even if you jump in a vehicle, he’s going to go with you, and you can bring them to the place you want to go.

GamesBeat: I see you can also set loose this elephant.

Méthé: Exactly. That’s part of the game, finding ways to use the systems. We’re not a typical shooter, where your guns are your only options. We want to emphasize that there are multiple options, whether it’s the animals or the guns for hire. You can tackle a situation in multiple ways.

GamesBeat: I noticed that some of the animals would just attack me. The wildlife is a threat sometimes. The eagle tried to get me, some kind of weasel —

Méthé: Oh, yeah, the honey badger. The way I see it, it’s a double-edged sword. Either you’re able to use them so that they work for you, or they can be a challenge for you. We also have different tools in the game that might allow you to manipulate them, like the bait you can throw. If a tiger’s coming at you and you have bait, you can throw the bait and the tiger will go for that instead of attacking you. You can also craft and use a special syringe that will make the animals not notice you. With some of those you can actually walk among the wolves without getting attacked.

GamesBeat: How far along is Far Cry 4 at the moment?

Méthé: We’re shipping very soon, in November. The build on the floor today is one month old, so there are still a lot of bugs. If you were to play our current build, they’d be fixed. We’re very advanced. We have thousands of hours of playtesting in already. Everything’s on track. 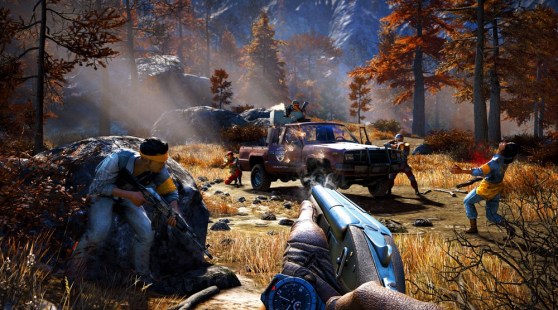 Above: Firefight in Far Cry 4

GamesBeat: You’re still unlocking a lot of these towers. Is this system similar to how Far Cry 3 worked, with the changes being the discovery of more missions and quests in each section?

Méthé: There are different changes. At first, most of the towers could be seen as puzzles. The one you played is pretty early in the game, so it’s simpler. But as you progress in the game, you’ll find that some of the towers are pretty unique. It’s not just about finding a ladder. You’ll need to find more keys and other things to climb up them. We also put a lot of emphasis, when you get the camera reveal, instead of showing you a static place, it’s really to show you how the world is living while you’re not there. With the towers we kept the same basic systems, though. It gives you access to weapons and unlocks new types of quests.

GamesBeat: How do you feel about the better graphics here? In what ways is this a step up?

Méthé: We won some awards for art direction on FC3, and I’m confident it’ll be the same with this one. We’ve really pushed the envelope. One of the strengths of Far Cry, and in fact one of the taglines from our art director, he’s always saying, “We own the color.” We’re a shooter at the core, but we go very far into saturated colors. Our setting allows us to have a huge spectrum of colors, whether we’re talking about the almost tropical beginnings, or the mountains and the snow. Shangri-La, too, that we revealed a bit of, is this weird, mystical place. It’s all in red and yellow. I think players will be pleased by what they see.

GamesBeat: Your villain is a pretty strong one again. Is that something that’s now also a signature for Far Cry?

Méthé: Yeah, I think so. We like to call it a personality bond. When you meet our villains, or just the different characters in general, we want the player to be shocked every time, amazed and intrigued. We think we’ve succeeded. Pagan isn’t just an evil guy. When he’s talking to you, he’s almost charming.