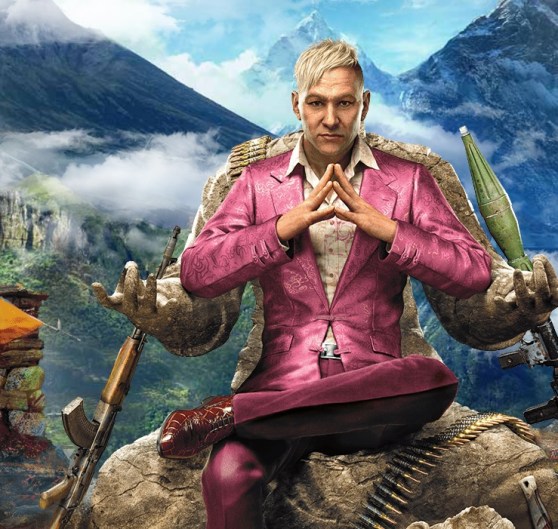 Above: Pagan Min, the villain in Far Cry 4.

Méthé: Yeah. It’s almost enticing, to some extent. You start to think that maybe you could be on his side. That’s one of the strengths of the character.

GamesBeat: Did you want to depart from Vaas, Far Cry 3’s villain, in some way? How would you describe Pagan Min as different?

Méthé: Vaas was more raw, I would say. Pagan is more subtle, clever, intelligent. In some cases he’s going to have his outbursts of rage, where you’ll understand his real nature, but on the surface he’s much more charming than Vaas was.

GamesBeat: Far Cry has balanced story and open world for a while. How are you doing that in this game?

Méthé: We’ve done some different things. One of the first things we discussed early in the project — one of the strengths of Far Cry 3 was that if you and your friends were all playing the game, you’d start to get together and say, “Hey, you wouldn’t believe what happened to me yesterday.” We wanted the same type of water-cooler moments going on, so that’s why we introduced some more divergence to the story. There are points where you have to decide whether to follow one character or another, for example.

Another point, because the player spends so much time out in the open world, we spent a lot more energy on making sure that the open world is coherent. Everything you’re going to discover, whether it’s the collectibles or the treasures or the hidden areas, they all belong there. As you uncover them, you’ll be able to understand why these things are there and who put them there and for what reason.

GamesBeat: You have a nice variety of weapons again.

Méthé: Yep. We brought back all the weapons from FC3 and added a few new ones. Our designer in charge of weaponry is crazy. He’s always pushing for more. We already showed the automatic crossbow at E3. My favorite, though, even if it’s overpowered, is the automatic grenade launcher. It’s almost a win button, but that’s a late-game weapon.

Another one I really love, because I’m a stealth player, is the throwing knife. You can use it as a stealth kill when you’re sneaking up on someone, but also just as a reflex. When you’re infiltrating an area, you might turn a corner and get caught off guard. A quick tap on the right pad and whoosh, you’ve got them. 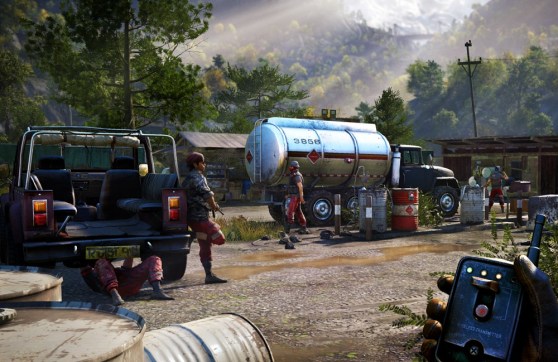 Above: Far Cry 4 has beautiful vistas of the Himalayas.

GamesBeat: How big is your team on this game, and where are you all located?

Méthé: The main campaign is being done in Montreal, but beyond that we have a lot of different studios helping us. I’ll try not to forget one. We have Toronto, who are working on different areas, but mostly on Shangri-La. Red Storm in North Carolina is working on PvP and all the backgrounds. Shanghai is helping with the animals and specific missions. Kiev is working on the PC version. Altogether, I don’t even know the real number, but it’s a fair number of people.

GamesBeat: I hope the guys in Kiev are doing alright.

Méthé: Yeah, it’s been tough. When it started, though, we got emails every day – “No, it’s under control, no problems.”

GamesBeat: Do you worry about shipping this at the same time as a new Assassin’s Creed?

Méthé: Well, Ubisoft is a huge company. Just in Montreal we have 2,500 people working there. Each brand has the right amount of people and partners to help out.

GamesBeat: If you look at the larger market, what would you say is the identity of Far Cry? What’s its unique place?

Méthé: The way I see it, the open world makes us different from the competition. A lot of other games bill themselves as open world, and in some cases that’s fair, but we put a lot of focus on making sure that our world is alive with or without you. It’s not scripted. Nothing is waiting for you before it happens. As I roam around in Far Cry 4, I never know what’s going to happen next. That’s our strength. 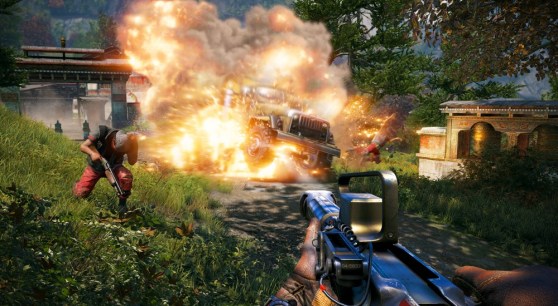 Above: Explosion in Far Cry 4