Intel finally has a big customer for its smartphone chips. Taiwan’s Asus is announcing tonight that it will use Intel chips in its upcoming hybrid smartphone-tablet, the PadFone X Mini, on AT&T‘s wireless network in the U.S.

The design win is perhaps the only good news that Intel has had for some time in its mobile and communications group, which lost $1 billion in the third quarter alone. The king of the PC market, Intel wants to expand to mobile. But it has been trying for years without success to shove aside Qualcomm and get its chips into mainstream smartphones in the biggest markets. AT&T’s 4G network can reach as many as 300 million Americans.

Hermann Eul, vice president and general manager of Intel’s Mobile Communication Group, said in an interview with VentureBeat that Asus chose to use two chips from Intel in the new device, which has a snappy and responsive user interface. The device combines battery efficiency, high performance, and convenience, Eul said. The device 15.8 hours of battery life in smartphone mode, and 28.3 hours when it is plugged into its dock.

“We’re very excited about Asus bringing this cool device to the U.S.,” Eul said. “It has attractive pricing and could have a broad reach to customers.”

The Android-based PadFone X Mini from Asus is a big win because it will launch in the U.S. on Oct. 24 on AT&T’s 4G LTE Network with no annual contract for $200. The device is a 4.5-inch 4G LTE smartphone with Intel’s LTE wireless radio and its mobile applications processor. When you dock the device in a docking station, the device becomes a 7-inch tablet.

After it starts selling at AT&T retail stores on Oct. 24, it will go on sale with various national retailers in November. AT& will charge $40 a month for 500 megabytes of data and 500 minutes of talk time. Intel is making the announcement at the Hong Kong Fair trade show, which is billed as the world’s largest electronics event. 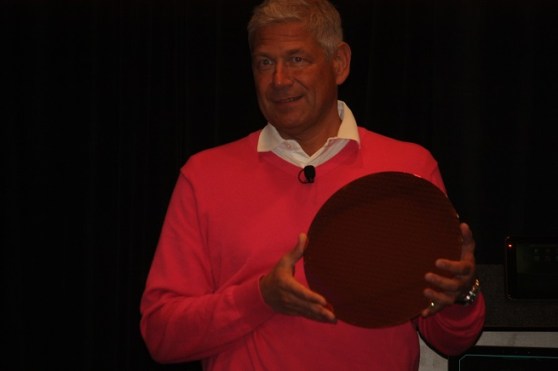 Asked if Intel has invested billions in the mobile chip market, Eul said, “Yes, you can say that.”

He added, “You’ll see Intel all over the place at the fair. We have 30 original device manufacturers, more than 70 tablets, and we have 150 customers creating designs with our technology. We think our investments will yield increasing market share. That is our intention. We are putting a high amount of R&D behind this to stay concurrent and be a leading market player.”

Eul said his goal is to have a lot of market share in mobile devices, which have in the past been dominated by chip makers such as Qualcomm.

“The PadFone X Mini is a powerful device with great features from ASUS and Intel – and all on the nation’s most reliable 4G LTE network,” said Jeff Bradley, senior vice president of device marketing and developer services at AT&T, in a statement. “Offered at budget-friendly prices, consumers that want a quality device with no annual contract will be thrilled with the performance and value of the PadFone X Mini.”

Benson Lin, corporate vice president and general manager of mobile communication at Asus, said in a statement, “ASUS is passionate about providing incredible experiences. We are excited to work with AT&T and Intel to bring the ASUS PadFone X Mini to the U.S. This unique device offers the compelling combination of a 4.5-inch LTE smartphone and the power and versatility of a 7-inch handheld tablet that allows people the best of both world experiences.”

It was a lot of work to get Intel’s chips into the new device, Eul said. Intel had to test its LTE modem with AT&T’s network.

“We have a long-term agreement signed with Asus,” Eul said. “We are in it for the long term, and so are our customers.”

Eul said that Intel has a separate manufacturing process for its mobile chips, compared to the manufacturing lines it uses for its PC chips. The Asus device has an Intel XMM 7160 LTE modem and an Intel Atom processor with Hyper-Threading Technology, which supports four simultaneous application threads for smooth and seamless multitasking and responsive web browsing. The device has a 5-megapixel PixelMaster camera.

“We have begun certifications across the world and you will see products come out,” said Brian Krzanich, CEO of Intel, in the company’s Q3 analyst cal today. “Rather than push ourselves into the phone space, we are going with strong partners.”

Krzanich said he was optimistic about the company’s alliance with China’s Spreadtrum as well as other efforts to push into the smartphone and tablet markets.