People ages 18-34 are leading the pack when it comes to watching original TV programming on a device other than a traditional television set, according to a new comScore report released today.

The results of the report show that 44 percent of millennials (18-34 age demographic) watch TV on desktop computers and 49 percent watch TV on tablets. That’s far more than the older generation, as you can see in the graph below. What’s more interesting is the willingness among this age group to also watch TV on smartphones at 31 percent (compared to 14 percent of those ages 35 to 54), which traditionally have smaller screens and thus doesn’t usually attract an audience for long-form content. 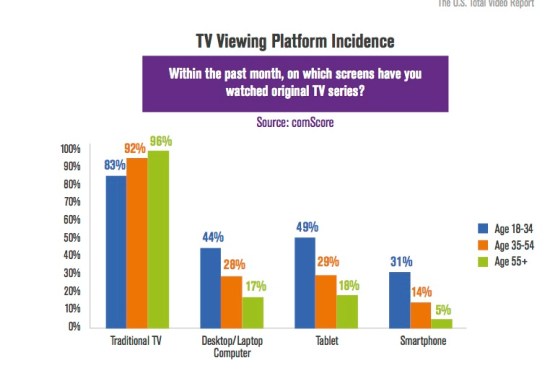 “About 1 out of 6 Millennials said they did not watch any original TV series from traditional TV sets within the past 30 days, a significant trend highlighting the potential for linear TV viewing to erode over time,” the report states.

This could be why we’re hearing rumblings that Netflix is planning to release movie and TV show clips to boost viewing of its streaming video service on mobile devices, as GigaOm previously reported. It could also help explain why companies like Disney paid upwards of $500 million to acquire Maker Studios to remain relevant, as my VentureBeat colleague Chris O’Brien reported yesterday.

That’s not to say that TV sets are going away — at least not anytime soon. The same report also shows that traditional television is still the most popular device that everyone watches over the course of a month. I don’t put a ton of stock into this particular stat because TV is still the main device that television networks are pushing its new content on (even though companies like Hulu, Netflix, and Amazon are slowly changing this with a crop of their own original shows.) Therefore, yes of course people are more likely to catch a new TV show on traditional TV in any given month.

What I’m more curious about is whether TV networks decide to start creating major original programming targeted at those that are open to watching TV on a smartphone or tablet, which probably isn’t that far off.