Skype today launched Skype Qik (pronounced “quick”), a new video messaging app meant to be used alongside the main Skype app. The new mobile-only offering is launching simultaneously on Android, iOS, and Windows Phone. You can download it now from Google Play, Apple’s App Store, and the Windows Phone Store.

Skype describes Qik as “a totally effortless way to capture the moment, share laughs, and chat with groups of friends” by turning short videos into conversations. The goal is to make video chats “as spontaneous as messaging but as intimate as calling.”

The name may cause a bit of confusion, given that the Qwik and Kwik are both taken (and in English they actually sound like “quick”), as well as that Canadian messaging app Kik is relatively popular. Yet Skype acquired a video streaming startup called Qik in January 2011 (and shut it down in April 2014), so the choice likely comes down to a question of trademark.

Each video can be up to 42 seconds long. Why 42? Well, that’s the answer to life, the universe, and everything.

Videos are square as opposed to rectangular, much like Instagram photos. Skype achieves this using its own custom encoders, which not only produce distinct-looking videos but also result in smaller files. Skype didn’t give VentureBeat a range, but it did tell us that users can expect transfers “about the size of two JPEGs.” 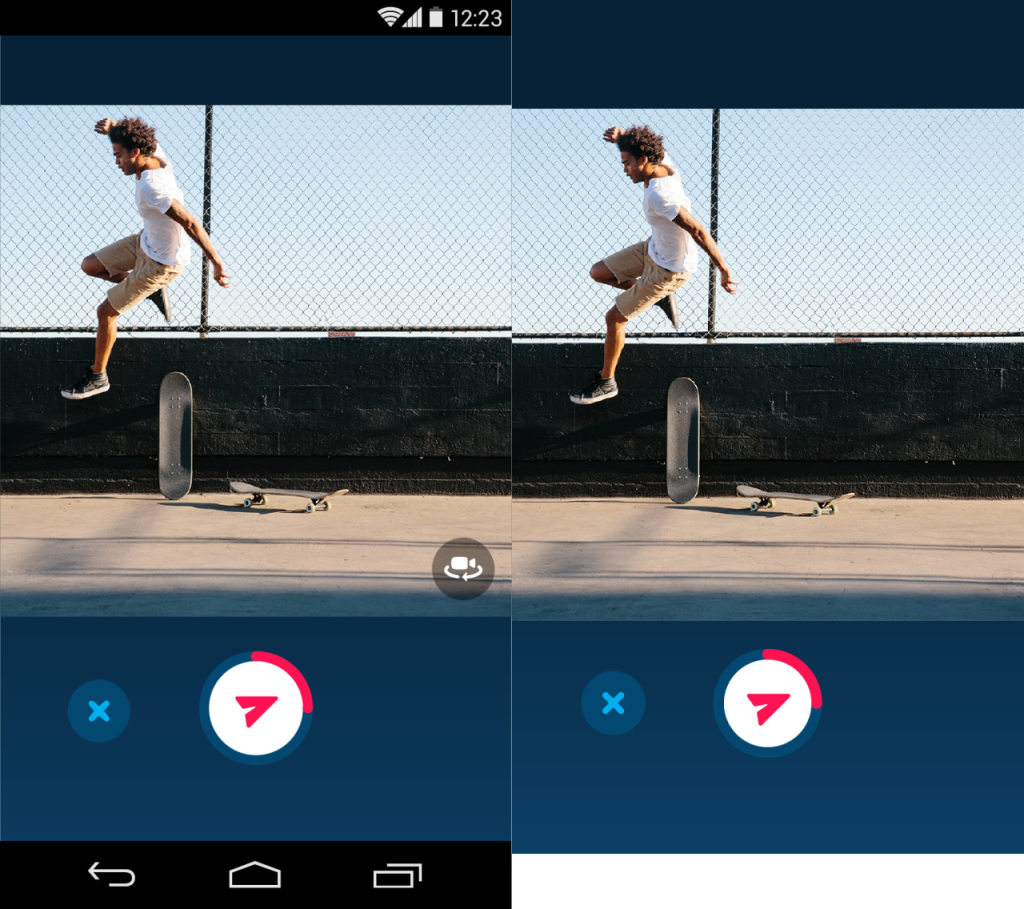 Qik downloads each video message first and only afterwards pings the receiver with a push notification. This ensures that when you open up a video message, it’s already loaded and can be played back immediately. It also means that Qik does not run in the background, so you don’t have to worry about draining your phone’s battery when you’re not using the app.

Sharing a video is immediate: Tap the pink button once to record and a second time to send. There is no step for previewing your recording, although you can delete the video whenever you want. Interestingly, you can switch between your front and back camera on the fly while recording. In the demo we were given, there was no significant lag during playback.

This is a Skype app, meaning it’s all about video. Nevertheless, Skype Qik feels separate from the main Skype brand, despite the similar logo, and the shared parent company. This is mainly because the app doesn’t ask for a Microsoft account or Skype username.

Like many messaging apps nowadays, it uses your mobile phone number and pulls your contacts from your phone’s address book. You can add whoever you don’t know in a conversation to your own contact list. 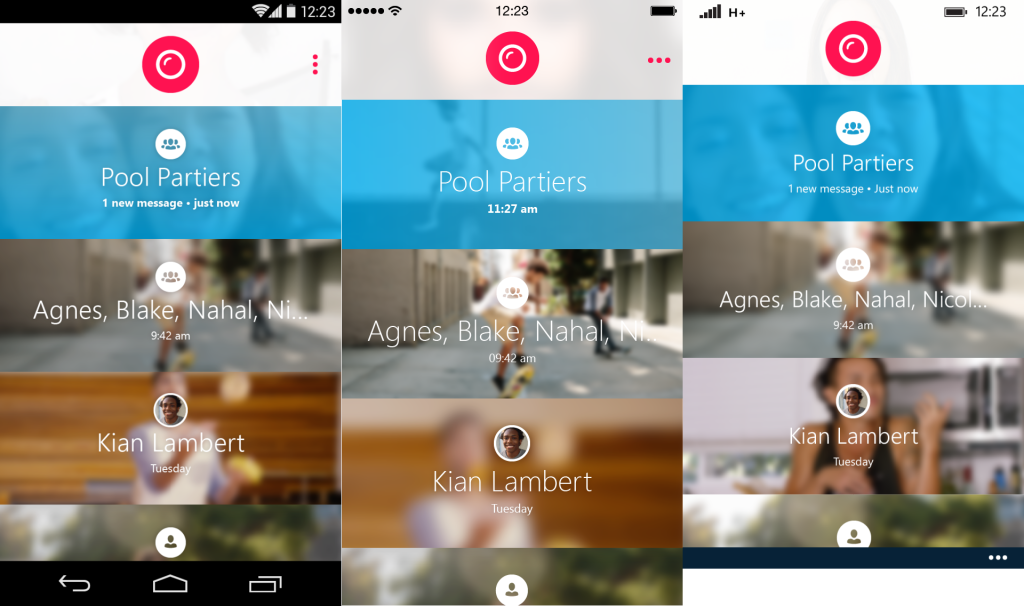 If you are sent a video message but don’t have Qik installed, you’ll get an SMS informing you what it is and what it requires (Android 4.1 or higher, iPhone 4 or higher, Windows Phone 8.1 or higher). Skype says the main reason for these limitations is the custom encoders.

When you hit play in the main conversation window, videos are played in the order they were sent, starting from the last not-yet-viewed message. You can rewatch a full video chat since the videos play one after the other, or catch up on what you missed from a certain point. You can also pick and play individual videos.

By default, a maximum of eight videos are visible at the top (the thumbnails for each are picked by an algorithm that tries to select the most stable frame). If there are more, you can swipe and “pull” additional videos into view. 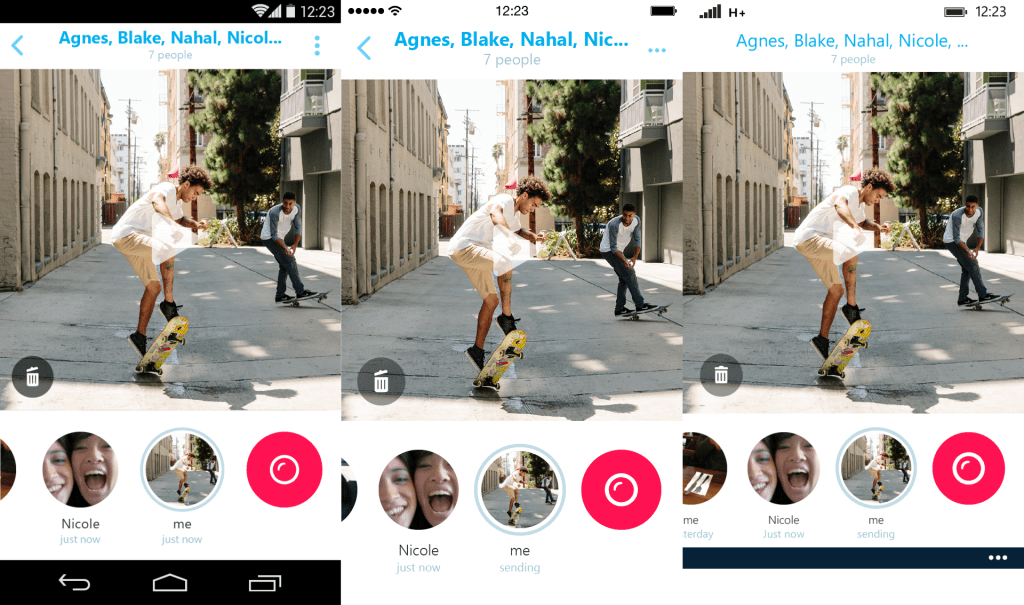 The app also puts some emphasis on privacy. Skype underlined to us that Qik’s contacts remains on your phone. They aren’t uploaded or stored anywhere else.

Qik is not only Skype’s first attempt at building a completely new platform, but it’s also Microsoft’s first experiment with ephemerality (you’ll remember that WindUp was a Microsoft Research project). Skype emphasized to VentureBeat that it doesn’t want users to worry about any immature or silly videos haunting them later.

So the sender of any video can delete it on both their phone and the recipient’s phone, including right after they send it, whether it’s been watched or not. Also, the app doesn’t have options to save videos locally or share them again to others.

Recipients can’t delete individual videos, as conversations have to maintain integrity across each device. That said, they can always leave the conversation or delete it entirely.

Furthermore, each video is deleted automatically after exactly two weeks. Skype argues this length of time is short enough that previous videos are forgotten about but long enough that an ongoing form of video chat can still be maintained.

The Extras and Limitations

If you’re eager to quickly reply to a video message but don’t want to, or can’t, record a clip, you can send a Qik Flik. These are five-second videos that you’ve recorded earlier (Skype gives you a few default ones when you first install the app) for sending when you’re in a place where recording video just doesn’t make sense.

You can store a maximum of 12 prerecorded videos for reactions, though Skype told VentureBeat this arbitrary limit might be increased one day. Qik Fliks appear just like ordinary videos in the app, the only difference being that they are accessible by tapping a smiley face, located just right of the main pink record button. 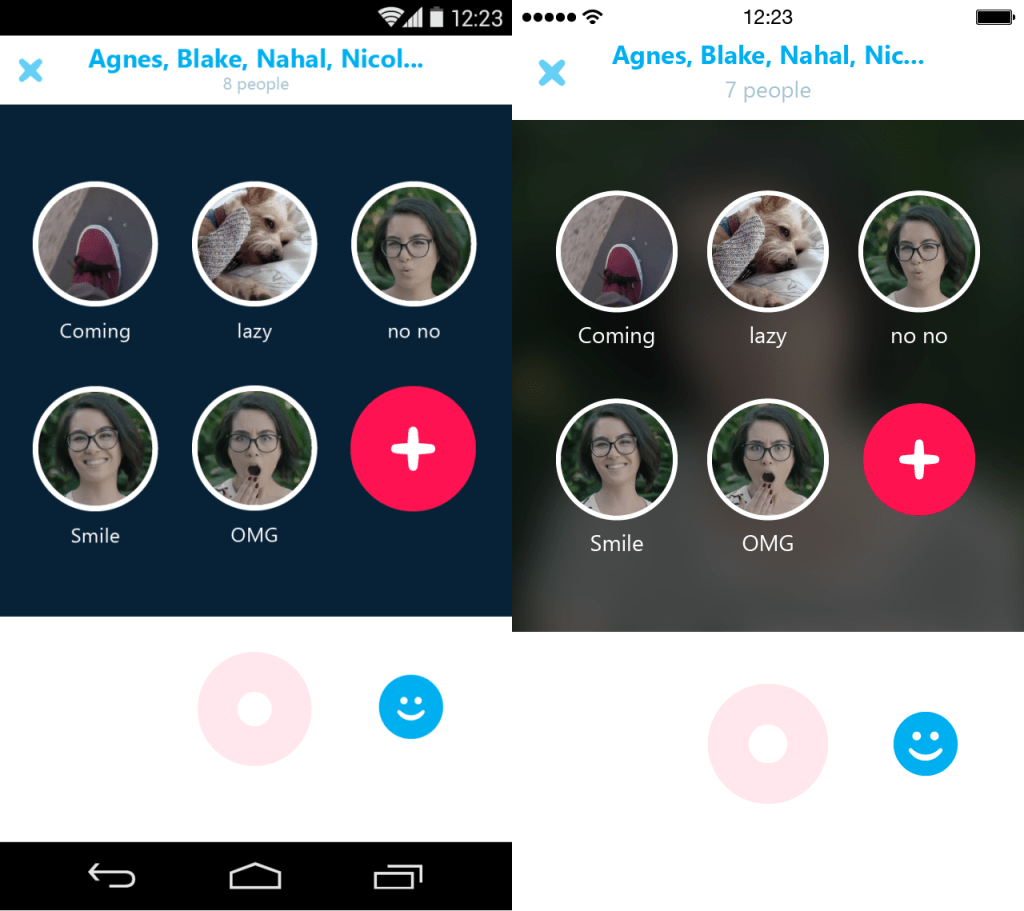 In short, Qik Fliks are like your own personal reply GIFs. You might want to save a thumbs-up sign, a sad face, or whatever you think you’ll want to quickly send more than once.

While this is a multi-platform release, it comes with some limitations. Blocking contacts from sending messages to you is available on both Android and Windows Phone; the option is coming to iPhone “in the coming months.” Qik Fliks can be received on all devices but only sent from Android and iPhone; sending functionality is coming to Windows Phone “in the coming months.”

Most Skype calls are scheduled in advance. Qik is an attempt to offer users a much more impulsive video platform, which can be used in between the planned calls with friends, family, and coworkers.

It’s also worth noting that Skype is excellent for one-to-one calls, and while it supports group messaging, the feature was added much later (and the video component only became free in April). Qik meanwhile handles groups no different than video conversations with individuals.

In fact, Skype told us it has an internal test group with over 250 people all sending video messages in one conversation. Furthermore, you can add people from a group chat to your personal contacts and then start individual or group conversations with them too.

In short, Skype wants a bigger slice of the messaging battle. Its platform is seen as a serious communication tool rather than a casual one. Qik isn’t supposed to take away from the main Skype app — it’s meant to complement it.

From what we’ve seen, Qik is unique enough from other messaging tools that it can find a place in the ridiculously saturated market, but that doesn’t mean it will necessarily catch on quickly. In fact, Qik will have all the usual adoption problems that new chat apps face, plus bandwidth limitations.

Cutting down the dimension of videos to a square size, as well as using custom encoders, will certainly help in this department, but Skype is still taking quite a gamble with an early bet on mobile video chat. The Microsoft-owned company is ruling out hundreds of millions of users simply because Qik won’t be usable on their networks.

Yet if Qik gains initial momentum, it certainly could become the leader in this category, with many players nipping at its heels. Plus, it could see a growing number of users as mobile Internet speeds increase.

In the end, this is just the initial release of Qik. Skype already has new features it plans to add, but it will be taking feedback on what else it can implement to make mobile video messaging mainstream.