Ubisoft’s big budget video game Far Cry 4 feels like three games crammed into a single title. It’s a narrative tale about a single man’s challenge to a ruthless and charming dictator named Pagan Min. It’s an open world where you can explore the wildlife and dangers of villages in the beautiful mountain kingdom of Kyrat. And it’s a first-person shooter with some of the prettiest 3D graphics that you’re going to see on next-generation game machines.

The question is whether these three games will come together as a single compelling title or if gamers will feel that the experience is a bit disjointed. In the past, gamers and critics loved the Far Cry formula, which puts you into a terrifying story amid a beautiful paradise, like a tropical island. You can enjoy the deep characters and the story of rescue, but you can also pursue the missions any way you want in the unpredictable virtual world of the game. Far Cry 3 received a rare 90 out of 100 score on review aggregator Metacritic.

If the French game publisher pulls it off, then Ubisoft could have another very big hit on its hands. However well it does, you have to hand it to the ambitions of the company. This game is just a small part of a powerful slate of games for Ubisoft in 2014 that includes Assassin’s Creed Unity, Watch Dogs, The Crew, and Just Dance 2014. 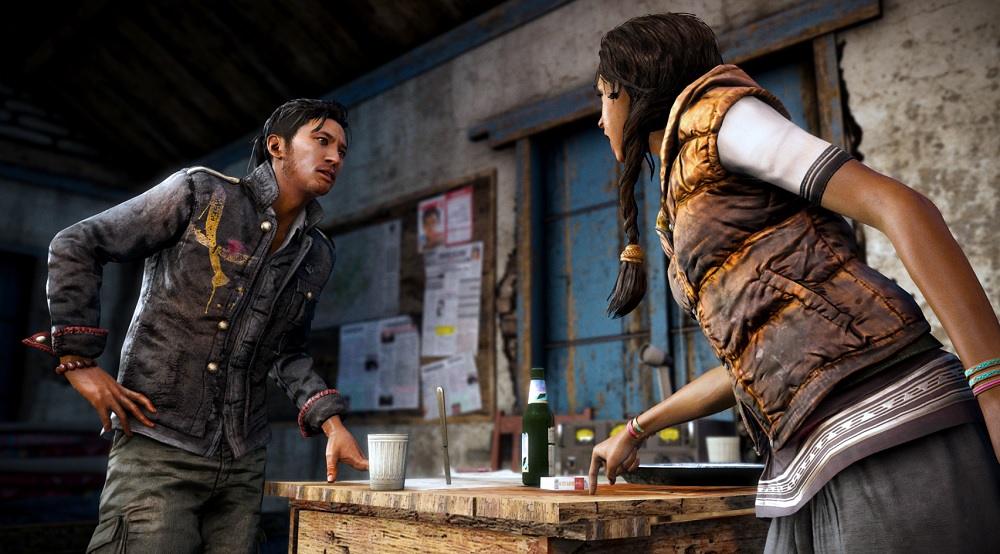 I got a preview of the game in its near-final state, and I’m not sure this one is going to beat the accolades that Far Cry 3 had. For one, the build that I played was about a month old, and it had a lot of bugs. It’s understandable to have code flaws at this stage, but the game is coming out pretty soon. It debuts on Nov. 18 on Windows PCs, the PlayStation 4, PS3, Xbox One, and Xbox 360.

I was one of those time-starved wretches who never finished Far Cry 3 in 2012 because I got lost in that open world. It just seemed a little incongruous that the story of that game had me looking for my kidnapped friends one moment, and then the next, I was enjoying a timed ATV race in the open world. I had evidently forgotten all about them.

Patrik Méthé, the game director of both Far Cry 3 and Far Cry 4, told GamesBeat that he recognized that players needed to feel more connected to the story even when they were unlocking different pieces of the open world. This time around, you’ll meet new characters and advance the story when you unlock new territories. Méthé said there are also more quests in the open world that will keep you busy for a longer time.

In my two-hour playthrough of both the single-player experience and the cooperative play, I found that Méthé spoke true about unraveling the narrative in the open world. I stopped at one town, and a cinematic began. I was introduced to one of the female characters in the game who was part of the resistance against Pagan Min. While I was in fact randomly visiting that town, it felt like I was making progress in the story rather than just grinding through some territories to collect loot. 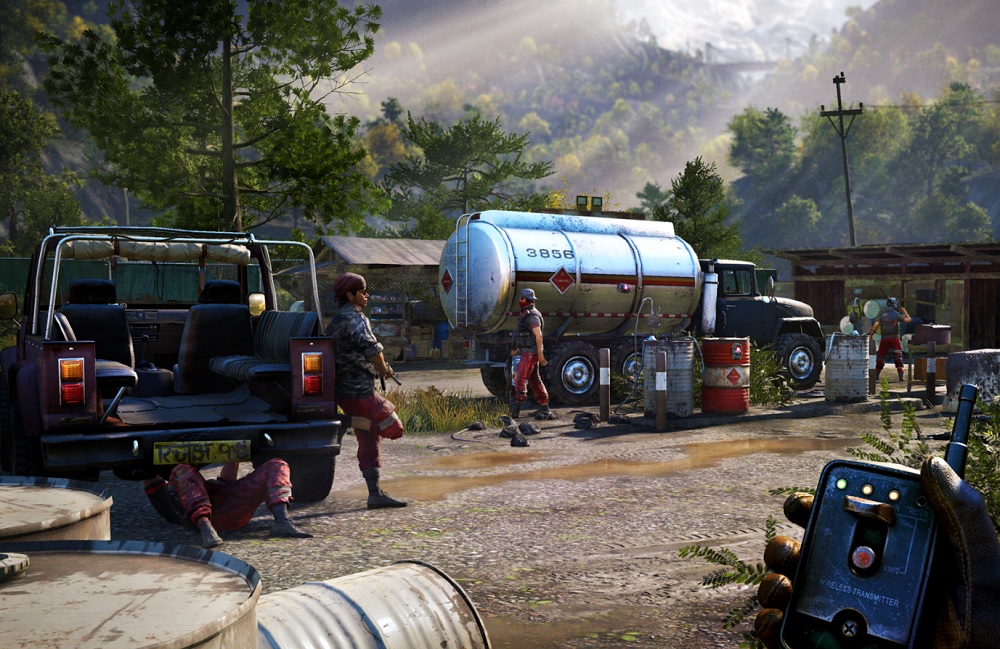 Above: Far Cry 4 has beautiful vistas of the Himalayas.

Ubisoft’s official trailer for Far Cry 4 introduced Pagan Min in a chilling scene. The protagonist, Ajay Ghale (played by the gamer), is riding a bus into the kingdom when a routine border check goes horribly wrong. Guards find contraband under the bus, two passengers make a break for it, and then the guards open fire. The driver tries to shoot the guards, but they kill him instead. Then the guards start shooting up the bus. But before they can do anything more, the self-appointed King of Kyrat arrives in a helicopter. Pagan Min is dressed in a purple disco suit and sports dyed blond hair.

He’s an animated and flamboyant character, pointing out to the guard chief that he specifically asked for the bus to be stopped, not shot up. As he does this little performance, he suddenly turns psycho and plunges a heavy silver pen into the eye of the guard chief. Then he plunges it over and over again until the guard is still. After that, Min switches on the charm again and poses for a “selfie” with the protagonist.

Thus, at the very beginning, the game introduces you to a compelling villain much like the psycho but articulate Vaas of Far Cry 3. Your job is clear: to take back control of Kyrat from Min’s private army and depose the dictator.

How you do that is a very long journey. And it involves exploring the kingdom bit by bit. You can unlock a region by moving into it, taking out the enemies however you like, and then going to the top of a communications tower. There, you switch off Min’s propaganda machine and turn it over to the rebels, a movement dubbed the Golden Path. This kind of gameplay is very similar to Far Cry 3’s. 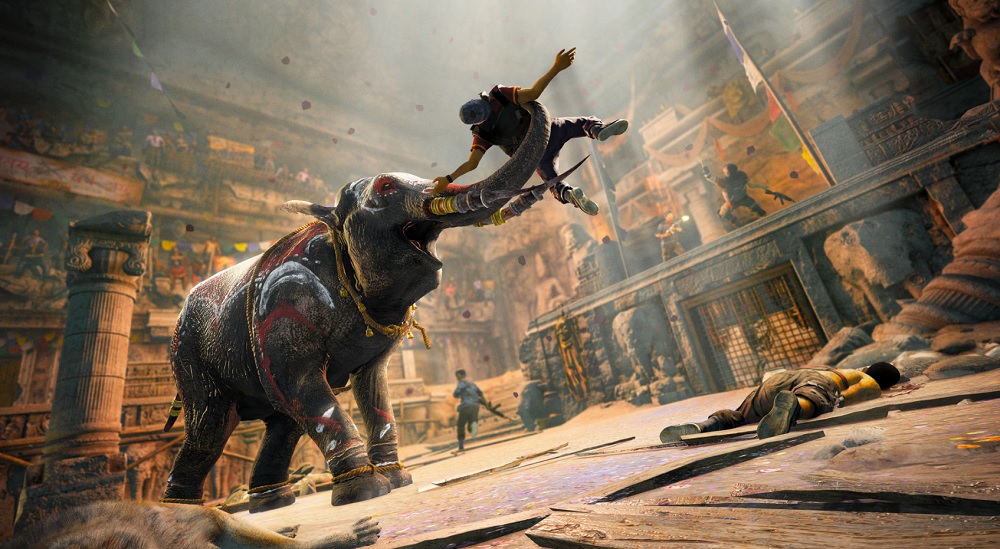 But there are some very interesting twists in Far Cry 4. You can look at a distant wisp of smoke and find that it’s burning for a reason when you actually arrive at the place. There are also things you can do with your body. You can use a grappling hook to climb on top of buildings. That makes it easier to ambush guards. You can also use a crossbow as a stealth weapon to bring death from above. And if you look down while you hit the melee control, you can kick something down on top of a guard.

The wildlife plays a role in the game. I was in a gun battle with a couple of soldiers when an eagle dove down from the sky and attacked me. I had to not only fight the soldiers but also ward off the eagle. It’s just one more kind of vertical threat that is new to the gameplay this time. Once, I was attacked by a honey badger, which did some serious damage to me before I ran around in circles and filled it with lead.

This gives you a reason to take the fight back to the animals. If you want, you can take a diversion from the narrative and go hunting. This yields more things for you to sell to the natives. And then you can build up your store of weapons, ammo, and vehicles. The old favorite, the hang glider, is still a great way to move about and see the lush scenery at the same time.

The animals, such as the realistically modeled birds, and the wind that blows through the vegetation gives the whole environment added realism. As you climb up a mountain, you see the clouds and fog far away, but you can also move close up to the rocks and see some very detailed etchings. The 3D graphics are once again some of the most beautiful I’ve seen in a game, and you can stop and listen to the ambient sounds that also make you feel like you’re really in Kyrat. 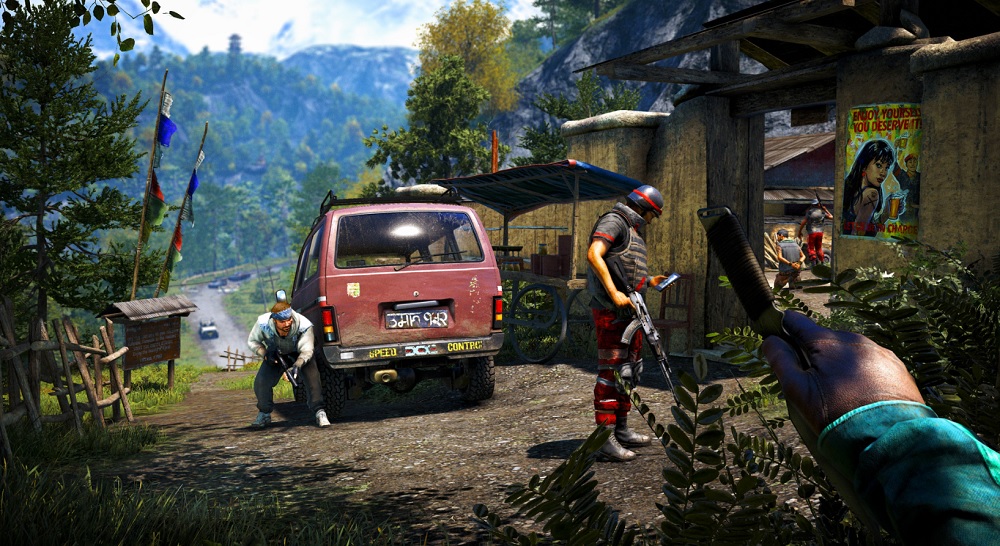 Once you get some serious money, you can also hire mercenaries. When you attack a village on foot, a mercenary can fly in on a one-man helicopter, called a Buzzer. While the helicopter distracts the guards, you can take them out on the ground. You can also do driving takedowns, where you pull up alongside a vehicle in a car chase and leap over to the other vehicle to kill the driver with a knife. Or, if you prefer, you can shoot while you’re driving to take out a fleeing vehicle.

There are some very cool moments when the unpredictable nature of the open world and its animal life come together with the first-person shooter combat. That happens when you invade a fortress where an elephant is tied up. You can cause a lot of havoc that spooks the elephant, and then you can shoot the locks off its cage. The elephant will go rampaging about the fortress, killing off a lot of your enemies. Then all you have to do is go in and mop up. I did this during my playthrough, and it was quite satisfying to hear the elephant stomping around and trumpeting.

When you play with a friend in co-op mode, the single-player missions are turned off. But you can then invade the outposts and fortresses with a friend. I enjoyed doing this, but my co-op partner didn’t want to go to the places that I wanted to attack. So we were kind of tied together for a ride that neither really wanted to be on.

We found that it was pretty hard to take out some locations even when we were armed with machine guns. We drove a truck straight into one checkpoint and found ourselves dueling with a dozen soldiers. They took us out over and over, and we had to revive each other frequently. It was a good reminder that it’s better to set up an ambush than to walk straight into the maelstrom.

Overall, Far Cry 4 is a massive undertaking. It has some impressive features, but we won’t know if it really lives up to its promise until we see the final version. I’m looking forward to seeing the finished product, which is being built by Ubisoft Montreal. The studio is getting help from studios in Toronto; Shanghai; Kiev, Ukraine; and North Carolina. You can figure that there are hundreds of developers pounding out the bugs now. I hope they get them, and then the real test will be how it all hangs together.