Are you a baseball fan? Check out our guide on creating monster players in MLB 15: The Show here.

Every year, I look forward to my favorite series tipping off another great October basketball experience. I’ve enjoyed my first few weeks with NBA 2K15, but I’ve also had to climb a steep learning curve in my favorite game mode: MyCareer.

How can there be a learning curve to a series I’ve bought annually for over a decade? It’s simple — NBA 2K15 developer Visual Concepts changed everything. Player attributes and unlockable badges are totally different. The purchasable player traits such as Finisher and Brick Wall are now part of the new badge system. Starting player types, such as 3-point shooter or slasher, have gone the way of the Seattle Supersonics (extinct).

I’ve had to relearn everything I learned in the years of creating powerful players that led to last year’s guide, but that’s OK. I think the drastic changes to the creation and progression of our MyCareers (formerly MyPlayers) are for the better as they create a much more difficult and realistic pro athlete experience.

This guide is a take on my typical slashing wing player at the shooting guard/small forward position. It will enable you to put up some decent numbers immediately, which is important as this year’s MyCareer storyline forces you to earn 10-day contracts and a roster spot through your gameplay.

I played all of my testing games (40 or so) on the PlayStation 4 at the Hall of Fame, or top, difficulty. As such, my guide reflects how to tackle the opposing A.I. at its most ruthless level.

As of press time, NBA 2K15 has been out all of 11 days. This guide is a work in progress, and your feedback and suggestions are welcome in the comment section below. 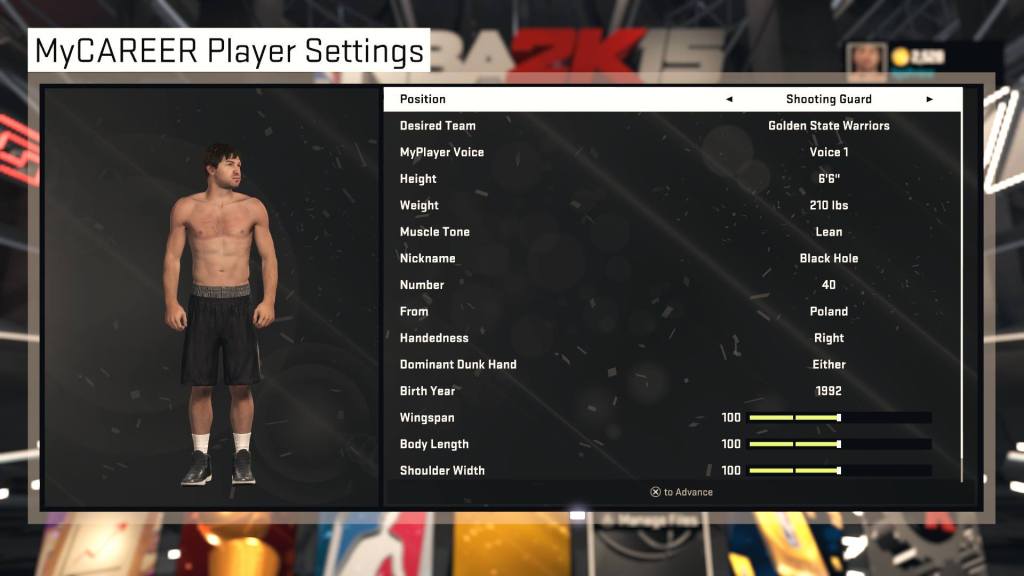 Above: The extremely revealing creation screen.

This part of the process is largely arbitrary now that player types are gone. Nothing you do in this game mode will have any effect on your player’s attributes beyond his overall rating.

In a strange turn, NBA 2K15 takes a player’s height into account when calculating his overall rating but not his various attributes, such as speed, quickness and strength. A 5-foot-10-inch shooting guard will have an overall rating of 60, while a 6-foot-6-inch shooting guard will have a rating of 62. Both of these players’ attributes are completely identical — they each possess a starting speed and quickness of 75, shooting attributes in the low 60s, etc.

Since a 6-foot-8-inch guard is just as fast as a 5-foot-10-inch one, you will want to go big. I don’t recommend going over 6 feet 8 inches though — the attributes may be identical, but a shooting guard this size feels slower to me.

Anything about 6 foot 6 inches will put your player in that shooting guard/small forward position slot, which is good. This doubles your value to the AI coaches, who still aren’t quite able to create really small or really big lineups like the ones strategically used in the NBA. And since you are going to create an athletic freak, playing against larger forwards will give you a juicy speed advantage, which will make them look absolutely silly.

Create your 6-foot-6 or taller shooting guard, select a desired team with a need at your position, and move on to the tryout. 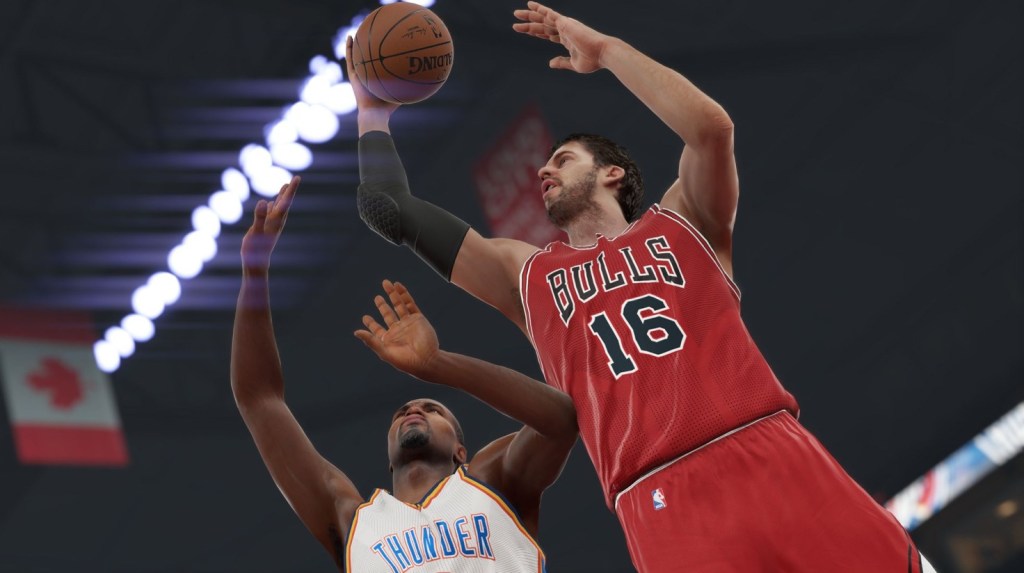 Above: Avoid shot blockers like Oklahoma’s Serge Ibaka [left] when using this guide.

Image Credit: 2K Sports
The tryout should be pretty easy to nail. I wouldn’t suggest trying out for a team with a performance requirement higher than a B+. Bare in mind, you freaking suck at this point. You aren’t good at any one thing — yet.

As soon as you are on a team, it’s straight to the options screen. Adjust the quarter length to 12 minutes. Unlike other sports games, NBA 2K15 is realistic enough to where playing full games won’t result in unfathomable scores like a 70-56 Madden NFL game. I crank the difficulty all the way up, but feel free to select whatever level provides a fun experience for you.

Next, go into the coach settings and change the play vision stuff to full and all plays. This will prompt your player with exact instructions for each play, which I certainly need. I also chose to select the automatic playcall option. Unlike previous versions, NBA 2K15’s automatic playcall system actually works. It will call different plays each time down the court, and your A.I. teammates will usually execute them instead of holding the ball until the 24-second shot clock expires.

Note that if you select automatic playcall, any play title with a 2 (if you are in at shooting guard, 3 if you are at small forward) in it will be for you. If the play isn’t for me, I typically sprint to get open near the ball carrier and call for the pass. If he gives it to me — which my teammates did more and more as I progressed — then I create my own play.

Now, it’s time to make sure your shooting, dribbling, and — most important — your free throw motions are in tune with how you play. In the NBA animations menu, I recommend selecting the quickest dribbling motions, which are typically numbers six or seven in the crossover, spin, and hesitation areas. Make sure your jump shot and free throw motions are to your liking, too — you can test the jump shot in the home screen of MyCareer, but the free throw practice will have to come in-game.

Which brings me to the actual nuts-and-bolts of your monstrous player’s playstyle: You are a battering ram. The object of this build is to relentlessly pound the painted area near the basket. If you will excuse the cross-sport metaphor, you are playing Oakland Athletics-style “Moneyball.” The idea is to create as many high-percentage (dunks, layups, shots within 10-15 feet) as possible as much as possible. You want to play exactly like James Harden of the Houston Rockets when he drives it: you either get the layup or the foul — or both.

Your primary weapon in this endeavor is the pick-and-roll. With the ball in your hands, press circle (or B on the Xbox One) to call for a pick. A larger player on your team will come and screen (intentionally block the path) of your defender.

NBA 2K15’s A.I. defenders are better than ever at defending this common basketball play, but more often than not, you are going to get a free run to the basket or at least a defensive matchup against a hulking behemoth on the opposing side. If you get this matchup, pull your player back near the 3-point line and take this guy off the dribble. As you level up your athletic stats (see below), this will only get easier. I like to cross him up with right-to-left-to-right crossover hesitation moves with the right stick, but do whatever is most comfortable and gets the job done.

Remember that the best time to take off on a pick-and-roll is just as your teammate plants his back foot on the screen. As soon as sets himself in place, smash your turbo button in the direction he is screening for you and attempt a layup or dunk. In the beginning, you are going to get your shot blocked pretty frequently. Keep at it. Eventually, you will get the foul call, the layup, or both about 80 percent of the time.

Study your teammates, too. If the player setting your screen can shoot a medium-ranged jump shot, like Pau Gasol of the Chicago Bulls, pass it to him and collect the assist. That’s only if you don’t have a lane to the basket, though. The A.I. is still a little stupid and may pass up the open shot; your player will not be that dumb. Don’t ever, ever, ever pass on an open or mostly open close-ranged shot.

Learn to use pump-fakes and jab steps to get your defender off guard. A simple tap of the square button right as you receive the ball can trick bad defenders into leaping to block your shot. Simply dribble it past them and slam the ball down their throats. If that doesn’t work, flick the right stick to the left and right to use jab steps. I like to use the jab-and-cross motion, where you jab step one way and then crossover and run the other. It works with a slightly less degree of success.

Another one of your go-to tactics should be the coast-to-coast fast break commonly used by athletic slashers like DeMar DeRozan of the Toronto Raptors. After a defensive rebound, immediately call for the ball. When you get it, slam that turbo button to have your player sprint up the court. Use any screens available to you and move laterally to tangle up the defenders and your teammates along your path to the basket, like this:

Successfully executed fast break plays like this will be your warm safety blanket in this harsh new MyCareer mode. Take those easy points and assists — you will need them to crack the starting lineup and have a shot at winning rookie of the year in your condensed season.

Remember to always follow your shot, too. If you get the defensive post player off his feet to block your layup, you can frequently snag a free offensive rebound by pressing the jump button right as you hit the ground. Look for a free put-back basket if the defense isn’t ready, or use your trusty pump fake to get the defender off the ground again for a clean run to the hoop.

This guide certainly has its limitations. You won’t be able to shoot — at all. Even wide-open, perfectly controlled shots will clang off the rim. However, if you execute the two simple plays listed and learn to execute your coach’s plays, you won’t need to shoot.