Late last week, the official Twitter account for Dragon Age: Inquisition explained that the developer maximized the visuals on both Microsoft’s and Sony’s new systems. The fantasy role-playing game, the third in the series, has 900 lines of horizontal resolution on Xbox One and 1,080 on PlayStation 4. But we wanted to know more, and so we reached out to BioWare to talk to Flynn about his team’s first big release on the new round of consoles.

GamesBeat: Could you go over how Dragon Age: Inquisition runs on the new consoles, in general terms?

Aaryn Flynn: For sure. The game runs really amazingly on the new generation of consoles. It’s remarkable, just how much we can push them and how much they do with everything from the density of the vegetation in the world to the subtle movements in things to draw distances. It’s a mix of both technical improvements and then translating those technical improvements into valuable artistic improvements. The number of characters on the screen — all of that kind of stuff. 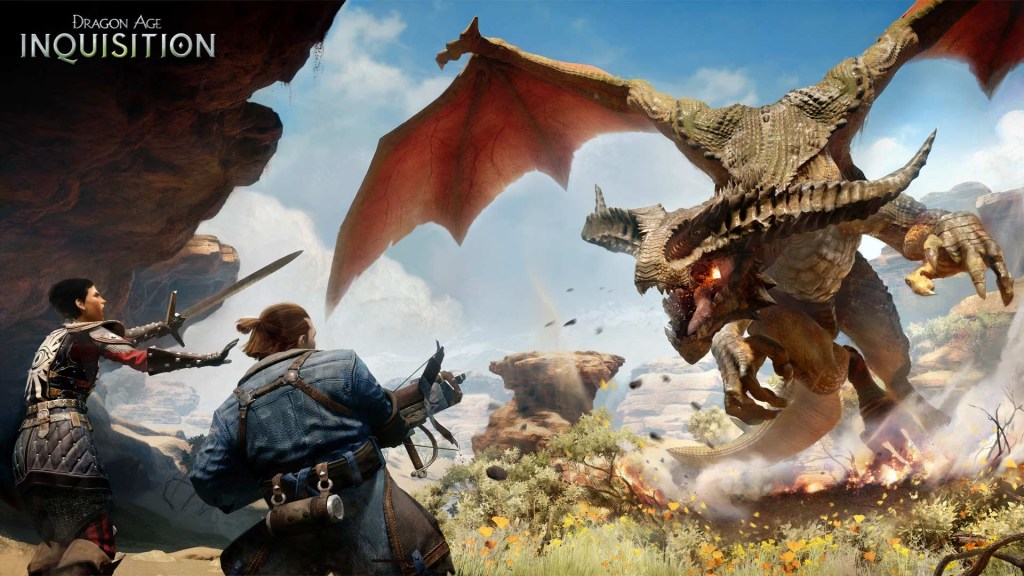 Above: Dragon Age: Inquisition uses the same technology as the gorgeous shooter Battlefield 4, and it shows.

GamesBeat: The game is running on Frostbite. The whole company must now have some experience working with that, but this BioWare’s first time working with Frostbite, correct?

Flynn: Yeah, it’s [BioWare’s] first game on Frostbite. We’ve committed to doing the next Mass Effect game and our new IP on Frostbite as well. It’s exciting. A lot of what we did with Dragon Age: Inquisition we did not just to make the best Dragon Age game we could make but [to] also set the future games up. The people are on it learning. All the effort of going to places like Stockholm to meet the DICE team and the Frostbite team and spend the time there and having their guys come over here — it was a coordinated effort between our studio here in Edmonton, a bunch of people at the Montreal team, and then folks from all over the rest of EA.

GamesBeat: What was that experience like — working with a new engine — for a team that tends to make such huge, expansive games?

Flynn: It was fantastic. It’s funny, because we didn’t know what to expect. We did a bunch of research into the engine four years ago now, even before Dragon Age II shipped, as we were deciding what our technology strategy was going to be for the next five to ten years. We did that work and then we went in with both feet and said, “Well, the best way to make use of this is not only commit all of our titles to it, but then also to work with the teams directly to offer our suggestions and focus on the things that we need to do to make our games good.”

With the Frostbite team handling a lot of the heavy lifting around core rendering loops and specific stuff around the platform, we focused on the RPG elements and the things we need to do to extend Frostbite to make our first RPG, Dragon Age: Inquisition. That was everything from updating the animation system to support quadrupeds — everything from horses to dragons — to putting pauses in the game. Frostbite had no notion of a pause before that, so we had to put pause in. There were all sorts of things that an RPG needs and we focused on getting those into the game. As we went on we learned the core internals of the engine as well, so we could do the best optimizations possible. We did most of those on this game as well.

GamesBeat: Did the technology enable BioWare to do things that it’s always wanted to do, especially in terms of enabling new kinds of gameplay?

Flynn: For sure. The two big things that are in some ways very simple, but which our games haven’t had for a very long time, are jumping — believe it or not, we have a real knack for taking engines that support jumping and taking it out of there. We never have jumps in our games.

And then things like mounts, for example. We’d never had mounted locomotion in our games before. As we watched people play other RPGs, other games that have it, we’d always thought, “Wow, we’d love to have that.” I’m very happy that those two very simple examples are in there.

And there’s a host of other things as well. All that translates into open world gameplay on this, using the Frostbite renderer and supporting the scale that engine can have—That really let us open up the exploration areas and put in systems there to make it open world. That was very fun.