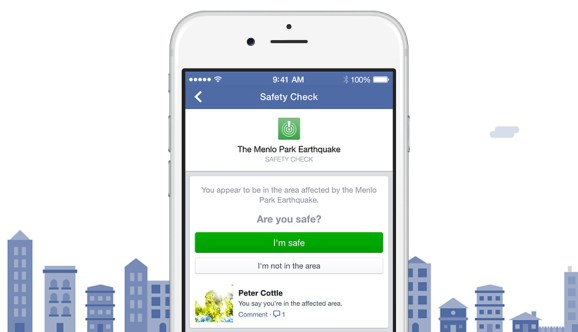 Facebook’s latest feature is one people will hope they never have to use.

The social network launched “Safety Check” today, a tool that is activated after a natural disaster, using either the city you say you live in or your location settings if you use the “Nearby Friends” feature. It will help you alert friends and family that you’re okay while also tracking the status of others.

“In times of disaster or crisis, people turn to Facebook to check on loved ones and get updates,” the company wrote in a blog post about the feature. “It is in these moments that communication is most critical, both for people in the affected areas and for their friends and families anxious for news.”

Facebook said the feature grew out of lessons it learned and work it began to do following the 2011 earthquake and tsunami in Japan.

“Our engineers in Japan took the first step toward creating a product to improve the experience of reconnecting after a disaster,” the company wrote. “They built the Disaster Message Board to make it easier to communicate with others. They launched a test of the tool a year later and the response was overwhelming.”

Once the feature appears during a natural disaster, the user clicks a button that says “I’m safe.” Likewise, users receive notifications about friends in disaster areas when they check in.

The feature should now be live for all Facebook users.