“Right now, the wearables space has only been dictated by the tech guys,” he told VentureBeat, speaking about his new i.am+ line. The first device, the Puls (yes, without the “e”) is a wrist-based computer meant to eventually replace the phone.

He’s also got a high-tech backpack with built-in speakers and artificial intelligence.

As can be seen from the picture above, the Puls is much larger than most other wearables on the market, at about 1/4 inch thick and 1 1/2 inch wide. The fully functional screen is meant for hands-free texting, phone calls, and social media updates. There are no release details yet, but a company spokesperson says it will be coming “around the holidays.”

Here’s what it looks like in comparison to the Basis watch (right) and the Jawbone (center). 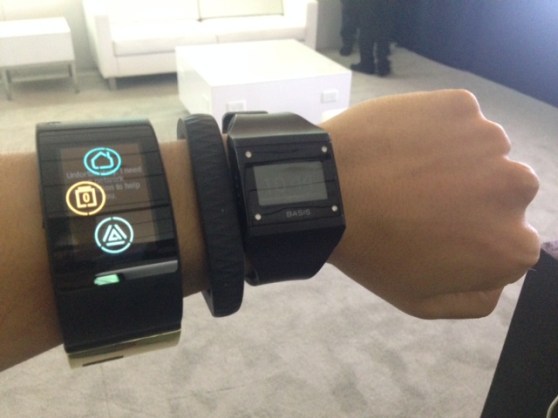 The phone has a touch keyboard, but is capable of voice-activity instruction. Here’s a (one-handed) video demo of a voice-controlled text message.

In addition to texting and calling, the Puls can also track location and steps, since the device will be connected through a cellular network (no word on pricing related to mobile connectivity). So, it also has a (limited) fitness application for runners.

The most unusual aspect of the device is its ability to take calls without holding it up to your mouth. I conducted a phone call with my hands by my side; I could hear the call crystal clear through the speaker and, more impressively, the caller could hear me talk at a normal volume.

Many readers may be asking how will.i.am hopes to compete with the likes of Google and Apple, both which have entered the wearable space with a lot more engineering horsepower. The pop star’s device is not competing with the Apple or Google watches, according to Deepak Tvs, head of engineering at i.am+.

“This is your communication device, and your tablet will be your consumption device,” he says.

That is, Tvs doesn’t believe the phone is long for this world. Fancy applications, Internet browsing, and multimedia consumption will all get shifted to tablets, while other devices will begin to take up the features that were traditionally associated with the phone, like calling and texting.

Moreover, Barry Waldo, the company’s chief technical officer, sees an opportunity for the fashion-minded. “We don’t see this as a watch. It’s a lifestyle statement,” he says. The device will launch with several different styles, including a gold-plated finish.

It’s an ambitious project, for sure. We’ll have more details as they surface. For now, the company is just looking for developers to begin making applications. When information is available for how to get involved, we’ll add it to this post.