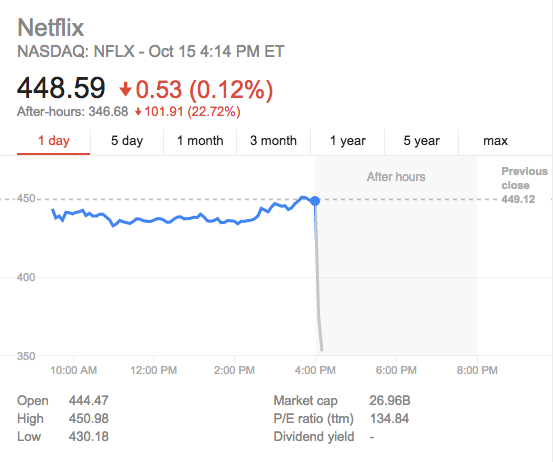 Above: Via: Google Finance

To consumers, however, this looked like a decent quarter for Netflix. In August, the company bragged that it had passed HBO in subscriber revenue (Netflix’s $1.146 billion to HBO’s $1.141 billion), and at one point the service apparently became more popular than YouTube in the U.K, according to one ISP.

Meanwhile, Netflix is working to expand its exclusive content collection, as it has reportedly secured deals with CBS, NBC, and the Weinstein Company. Netflix is still fighting with ISPs in the US over net neutrality laws. The company continues to strike deals with ISPs in the meantime. The service is now streaming 31 percent faster on Verizon FiOS, five months after a peering deal was signed.